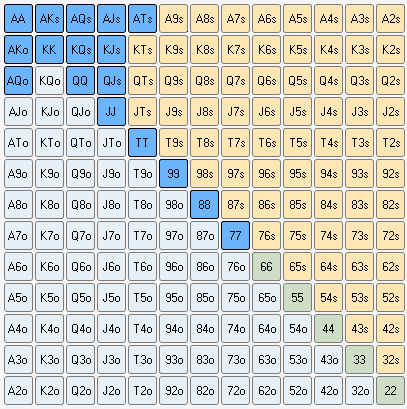 Why You Suck at Poker, Part 1: Under the Gun

The truth is, there are probably a lot of reasons why you suck at poker. If this column goes on for the rest of my life, I’ll never get to all of them. It would take years to cover all the reasons that I suck at poker — and I play for a living so I probably suck less than you do.

Are you the kind of player who plays poorly out of position? (Image: vox.com)

Still, we have to start somewhere, so let’s look at preflop play. It’s one of the easiest spots to analyze and determine how, and why, you’re so terrible. Playing better preflop will also keep you out of trouble on later streets where you probably suck even more. We’ll start at the beginning, with your range for opening the pot from under the gun.

Why don’t we start by having you write down your opening range when you are first to act at a nine-handed table where the average stack is 100 big blinds deep. Say, level one or two of a big tournament or a typical cash game.

It’s easiest to write out ranges if you use a standard notation that covers wide swaths of hands. So any ace is listed as Ax+, any suited queen above queen-five would be notated as Q6s+, and pairs are written as 44+. So a very tight range might be notated as AQs+, AKo+, JJ+. A very loose range might look like 22+, Jx+, Txs+ 34s+, 76o+. Or just go ahead and write down every hand that you would play under the gun.

Seriously, go write them down. Don’t be afraid. We were all bad at poker at one time, and this is yours — it’s okay. Just write down that under the gun range so we can get a feel for just how bad you are. Who knows, maybe you aren’t as bad as you think. But, you probably are. We all are. Poker is hard.

Let’s look at the solver ranges for a nine-handed cash game where the average stack is 100 big blinds. That would be a typical game here in Vegas. And solvers are pretty good at poker, so we can use their opening ranges for now. Your opening range from under the gun should look a lot like this.

It’s a thin line of viable ranges for players who don’t want to suck at poker.

Does this look like your opening range? If you had 77+, ATs+, KJs+, QJs, AQo+, or anything very close to that, you did fine. If not, then you’re even worse than I thought. Now let’s look at why you suck and how to fix it. Don’t get discouraged, we’ve got a long way to go and a lot more skills to look at. If you can’t handle fixing your game in the simplest spot, you’ll never make it to the article that covers value betting on a dry river with second pair.

If your range is tighter than the chart

If you just left out a few hands, especially if they’re the suited broadway cards, you’re fine. If you left out more than that, you’re just playing too tight and are probably worried about being reraised or aren’t comfortable playing out of position or in three-bet pots. This is a common problem among players born in the depression era who tend to be very tight with money. If you were born after 1940, you need to loosen up a bit. Get in there and mix it up.

You’ll never learn to play better if you’re never playing a hand. Your opponents are probably getting out of your way after the flop unless they can beat the monster starting hand they know you have because you’re so predictable. And if they out flop you, they know they can win a big pot because you’ll pay them off with an over-pair, and that’s usually what you have.

If your range is looser than the chart

If you just added in a few suited aces or a few more small pairs, you should probably tighten up a bit, but you aren’t as bad as I thought. If you added in any extra offsuit hands, or multiple more offsuit aces, you’re much too loose in early position. Your opponents probably play a lot of hands with you, three-bet you often, and love to see you walk up to the table.

If you’re a lot looser than the chart in early position, you’ve probably just started playing, so I don’t want to be too harsh. After you’ve had a few weeks to learn to play the game better, you’ll understand why it’s important to play tighter when you’re under the gun. Even so, here are some things to think about.

And what will you do when you get reraised? Call and play a big pot out of position with a bad hand? Or fold and abandon the chips you put in the pot? Either option sucks, which is why a good player won’t play that junk from under the gun. At least pretend to be a good player and tighten up a bit huh?