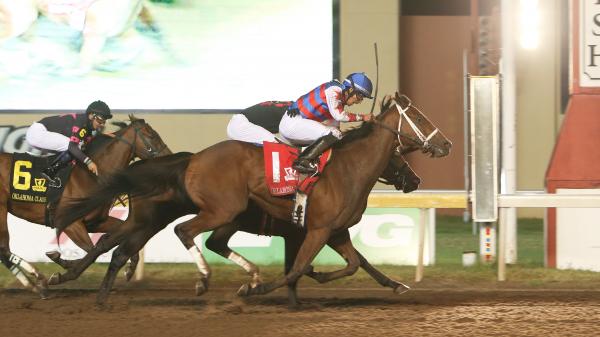 2021 Remington Springboard Mile at a Glance

While the Road to the Kentucky Derby series features some of the nation’s most well-known races at famous racetracks, there are a few stops along the way tailored for the little guys.

One of them is the Springboard Mile at Remington Park that offer 10-4-2-1 qualifying points for the 2022 Kentucky Derby Presented by Woodford Reserve to the top four finishers. That alone will not assure anyone of a spot in the run for the roses, but a victory Friday can certainly inspire the confidence to try one of the bigger Derby prep races next year when this year’s crop turns 3 years old.

1. Concept (5-1): He’s a stakes winner on this main track in blazing-fast time, but that was at six furlongs. He was then fourth by nine lengths at seven furlongs. The mile distance would seem to work against him, but he should get a ground-saving trip and he’s trained by Steve Asmussen, who is a dominant force at the track and has won this stakes in two of the last three years.

2. Make It Big (7-2): This Florida-bred is a perfect 2-for-2 after a pair of wins at Gulfstream Park. He took a nice step forward in that second start and should be able to handle the distance. Getting jockey Jose Ortiz to fly in and ride him is a big positive.

3. Bye Bye Bobby (4-1): He used a strong late kick to win his debut, rallying from sixth, eight lengths behind, to win by 1 1/2 lengths. That bodes well for his chances at a longer distance here as do some quick workouts for the race and hailing from a crafty and successful barn.

4. Shamayim (20-1): He’s already had two one-mile trips on the track, winning a maiden race and losing by eighth lengths in an allowance race. He seems to be getting faster with each start and, if his morning-line odds prove to be accurate, he merits some consideration.

5. Classic Moment (4-1): The second of Asmussen’s starters and the better of the two. He turned in two good efforts in Kentucky, especially last time out when he broke his maiden in quick time after pressing the early pace and taking the lead in the stretch. If he can duplicate that effort, he’ll be a major threat.

6. Rowdy Rascal (12-1): He’ll get tested for class after winning three straight races for Oklahoma-breds here at Remington. His times have been getting better and he was victorious at a mile last time out. He’s another longshot who does not seem overmatched.

7. Rich Strike (8-1): He won by 17 ¼ lengths in a maiden race in September at Churchill Downs,  but that was in a maiden-claimer. Despite the lopsided margin, the final time was mediocre and others seem much more appealing.

8. Revenir (12-1): He was a rallying second in a seven-furlong stakes, which is a positive. His times are on the upswing and he broke his maiden at a mile on this main track. In a highly competitive and well-matched field, he’s another contender who deserves a look at attractive odds.

9. Osbourne (6-1): Won nicely at an odds-on price in his second start at Churchill Downs after a promising second at the home of the Kentucky Derby. Both times were excellent and bode well for his chances. The post and the likelihood of ground loss may work against him.

THE PICK: Make It Big