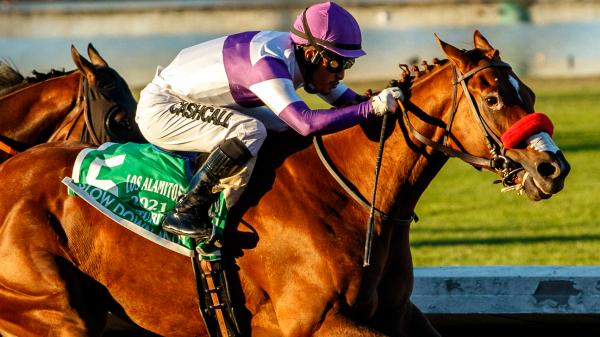 Racing Résumé: Slow Down Andy showed significant improvement in his first try stretching out in distance to compete in a race around two turns in the Dec. 11 Los Alamitos Futurity. He rallied from last of five after tracking a solid pace and outfinished Bob Hope Stakes winner Messier, a highly regarded 2-year-old, despite showing signs of immaturity in the stretch of the 1 1/16-mile race.

Slow Down Andy cocked his head to the side toward the grandstand on several occasions in the Los Alamitos stretch. He appeared to lose both momentum and focus, yet he was good enough to overcome that and beat a quality opponent by a length.

The Grade 2 Los Alamitos Futurity victory came after Slow Down Andy won his Oct. 9 debut in a 5 ½-furlong sprint at Santa Anita Park, followed by a runner-up finish in the Golden State Juvenile Stakes at Del Mar Nov. 5, when he faded late and was beaten by a half-length.

Running Style: Slow Down Andy has rallied from off the pace in each of his three races, but he has enough speed to gain good tactical position in his races. He was third and only a half-length off the pace after an opening quarter-mile in :22.21 in his career debut while sprinting and never was farther than 2 ½ lengths of the pace at any point of call in the Los Alamitos Futurity. He profiles more as a stalker than a closer.

Connections: Owned and bred by J. Paul Reddam’s Reddam Racing, trained by Doug O’Neill, and ridden by Mario Gutierrez, Slow Down Andy’s connections should be very familiar to fans of the Kentucky Derby and U.S. Triple Crown races. Reddam, O’Neill, and Gutierrez teamed to win the Kentucky Derby and Preakness in 2012 with I’ll Have Another and also won the Derby in 2016 with then-unbeaten champion Nyquist, Slow Down Andy’s sire. O’Neill has won more than 2,600 races in his career and finished third earlier this year in the Kentucky Derby and second in the Belmont Stakes Presented by NYRA Bets with Hot Rod Charlie, winner of the 2021 Vox Populi Award.

Pedigree Notes: Slow Down Andy is the third group/graded stakes winner sired by 2016 Kentucky Derby victor Nyquist, the 2015 champion 2-year-old male who won the first eight races of his career before finishing third in the 2016 Preakness Stakes. Slow Down Andy is from the fourth crop of Nyquist, by Uncle Mo, whose best runner to date was 2020 champion 2-year-old filly Vequist.

Derby Potential: It’s pretty clear from watching the Los Alamitos Futurity that Slow Down Andy is an unfinished project with a lot of room to mature and develop. The same can be said for almost all 2-year-old Thoroughbreds, but this colt looked especially green in the stretch — whether either the noise from the stands caught his attention or something caught his eye, he appeared to lose focus on a couple of occasions.  From that perspective, he has a great chance to improve with simple mental growth and possibly the addition of equipment, like blinkers, to improve focus.

What was most encouraging was that he came up with a career-best effort when stretching out in distance for the 1 1/16-mile race and finished reasonably well with a final sixteenth of a mile in 6.67 seconds despite gaping at the racetrack grandstand.

The 1 ¼-mile Kentucky Derby distance is always a question this early in the year, but if he is capable of excelling at a classic distance you can be sure Slow Down Andy’s capable connections will have him ready. He needs to improve focus and get faster, but there is plenty of cause for optimism for this soon-to-be 3-year-old on the Triple Crown trail.