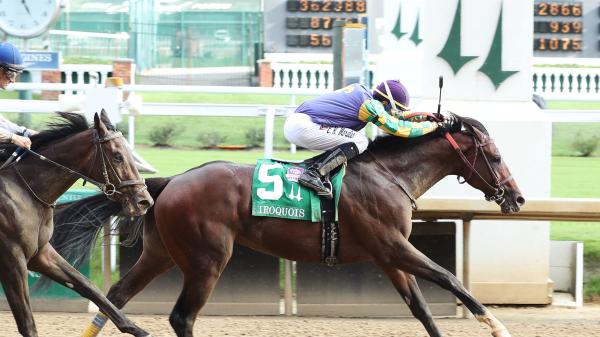 In general, 2-year-old stakes are a barometer of the future. The Gracde 2 Kentucky Jockey Club Stakes fits that description, and then some. Since it’s a 2-year-old strakes at Churchill Downs, not only does it provide some valuable qualifying points for the 2023 Kentucky Derby Presented by Woodford Reserve, it also gives the connections of the starters a preview of how well – or poorly – their horse may handle the track when the first Saturday in May rolls around. Through this year’s expanded point system a total of 10-4-3-2-1 qualifying points will be up for grabs in Saturday’s 1 1/16-mile test.

1. Curly Jack (3-1 morning line odds): He’s already won a two-turn stakes over the course, taking the Iroquois Stakes back in September. He was only a brief factor in the FanDuel Breeders’ Cup Juvenile presented by Thoroughbred Aftercare Alliance, but figures to be a main factor in this group from the rail.

2. Western Ghent (20-1): His only win came in a claimer and he’s exiting a 41 ½-length loss in the Grade 3 Street Sense here at Churchill Downs. That loss and another dismal defeat in the Hopeful came on a wet track, so a dry track may help his cause. Yet even that may not be enough based on a 6 1/2-length loss in an allowance race between the two flops in the slop.

3. Denington (12-1): Slop didn’t bother him in a maiden win here at Churchill Downs, giving off some hope he’ll run equally well on a dry surface. His trainer, Ken McPeek, won this stakes last year and usually sends out juveniles who fare pretty well here. Seems like an intriguing longshot here.

4. Gigante (12-1): He won his lone dirt race, but the time was on the slow side. He has some speed and could last for a share of the purse. Given his connections, he’s worth at least a look here, even if he’s the weaker of the two Steve Asmussen starters.

5. Red Route One (7-2): He didn’t care for slop in the Street Sense, but showed more promise prior to that, rallying belatedly for third in the Grade 1 Breeders’ Futurity. If he can duplicate his effort in the Breeders’ Futurity, he will be dangerous, especially with the added bonus of switching to jockey Tyler Gaffalione.

6. Freedom Trail (6-1): It’s a bit of a guessing game with him since he has yet to run in a dirt race. There’s dirt in his pedigree and his times were good on turf, so there are things to like. It’s just hard to project that he will take a step forward and beat this field.

7. Hayes Strike (10-1): He rallied for second on that wet track in the Street Sense, but was 5 1/4 lengths behind. He was 27-1 and 54-1 in his two stakes tries, which does not paint a pretty picture. On a more promising note, McPeek has a knack of winning with longshots in a race like this.

8. Instant Coffee (5-2): He was fourth in the Breeders’ Futurity, a head behind Red Route One. Like his workouts since then and would expect him to take a nice step forward here and turn in a big effort for a top stable.

9. Cyclone Mischief (8-1): Comes off a big and impressive maiden win, though the time was nothing special. Has some early speed, which will help to offset the outside post. But if he is forced to race wide and lose ground, that could come back to haunt him in the stretch.