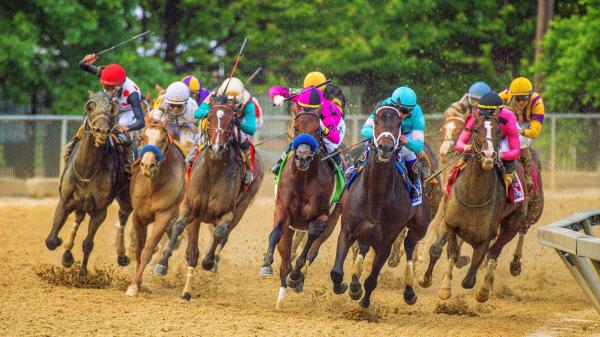 2022 Preakness Stakes at a Glance

As much as the Kentucky Derby Presented by Woodford Reserve winner will not be at the Preakness Stakes, the middle jewel of the Triple Crown will have a heavy favorite. Epicenter, who was second in the run for the roses, was installed as a heavy 6-5 favorite in the Preakness. Wins in the Twinspires.com Louisiana Derby and Risen Star Stakes Presented by Lamarque Ford bespeak how talented he is, yet just two weeks removed from an 80.80-1 winner of the Kentucky Derby no one can be blamed for believing the 2022 Triple Crown just might have another shocker up its sleeve.

1. Simplification (6-1): He benefitted from the torrid pace in the Kentucky Derby to finish fourth while racing wide. He usually figures in the superfecta and having the rail helps his cause. If the dire forecasts for extreme heat hold up, being a Florida-bred who has raced on hot days before might also work in his favor. He’s also been training at Pimlico for more than a week. Everything says he belongs in the exotics.

2. Creative Minister (10-1): He looked good winning an allowance race on Derby day and could be talented enough to be a factor in some major races. The key question is whether that will be Saturday in just his fourth start and first in a stakes.

3. Fenwick (50-1): An 11th-place finish in the Toyota Blue Grass Stakes, beaten by 36 lengths, underscores his 50-1 odds. Normally, he would be a tossout, but after what happened in the Derby, perhaps this crop of 3-year-olds has some more chaos left in it. If you can ignore his last race – which is hard to do – his race two starts back when he broke his maiden against a Grade 1-placed rival in Commandperformance gives him an outside shot to sneak into the bottom of the superfecta.

4. Secret Oath (9-2): This filly has injected some excitement into a race that absorbed a punch to the gut when the connections of Rich Strike opted to skip it. She has plenty of class but she seems a tad slower than the top contenders. She’s been racing without a break since she debuted in early October, and how she’ll handle the two-week turnaround is a big question mark given her expected odds of less than 5-1.

5. Early Voting (7-2): He’s a fresh horse with six weeks of rest who may be ready to fire the race of his life after setting the pace while finishing second in the Wood Memorial Stakes Presented by Resorts World Casino. He would have been in deep water in the Kentucky Derby given the brutal fractions, but the pace should be easier here. He figures to be tough to catch and could easily upend the favorite if there’s post-Derby fatigue.

6. Happy Jack (30-1): The pace didn’t bother him in the Derby. He was simply slow to find his best stride and never entered contention. He’s raced in four stakes and on his best day he lost by a little more than 10 lengths. We’ll pass.

7. Armagnac (12-1): He was a neck behind Happy Jack when fourth in the Runhappy Santa Anita Derby, which is hardly an endorsement. He then responded with a big, front-running allowance win at Santa Anita May 8 that punched his ticket to the Preakness. He should have an impact on the pace scenario, but it’s hard to picture this ex-Bob Baffert trainee being around at the end to benefit from it.

8. Epicenter (6-5): It was a tough beat in the Kentucky Derby as he moved into fast fractions and then held off Zandon, only to have 80-1 Rich Strike rush past him in the final yards. How he bounces back from a potentially draining performance with just two weeks of rest is the big question mark. He’s definitely a worthy favorite, but those 6-5 morning-line odds make him a dubious risk/reward proposition if you’re betting to win.

9. Skippylongstocking (20-1): If you like Early Voting then you should include him in your exotics. He was third in the Wood and has a late-running style that should prove beneficial if the pace gets too heated. Having experienced racing in Florida during the summer last year may also be helpful if Mother Nature enters the fray Saturday.