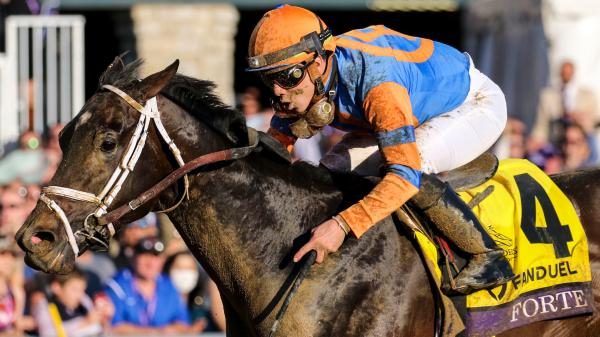 Welcome to 2023 Kentucky Derby Prospect Snapshots, where we’ll take a look each week at a recent winner on the Triple Crown trail, usually from the Road to the Kentucky Derby schedule from which the racehorses earn points toward qualifying.

The 1 ¼-mile Kentucky Derby Presented by Woodford Reserve will be held May 6, 2023, at Churchill Downs.

Forte earned 30 points toward qualifying for the 2023 Kentucky Derby with that win and moved into first place on the latest Road to the Kentucky Derby leaderboard with 40 points.

Racing Résumé: In winning the Breeders’ Cup Juvenile by 1 ½ lengths, Forte wrapped up divisional honors as champion 2-year-old male. It obviously won’t be official until the Eclipse Awards in early 2023, but Forte will be named champion after winning 4-of-5 starts in 2022, including three Grade 1 wins. In addition to the Juvenile, Forte also won the Hopeful Stakes by three lengths and the Claiborne Breeders’ Futurity by a neck in posting Grade 1 victories at seven furlongs sprinting and twice at 1 1/16 miles while navigating two turns. He is a deserving champion to say the least.

Speed Figures: One of the things to consider with 2-year-olds stretching out from sprints to two turns is whether they can maintain, or improve, their speed figures with added distance. Sometimes, even if a 2-year-old wins, a significant regression in its speed figure can be a sign that there might be trouble as the races get longer on the Kentucky Derby trail.

For Forte, the speed-figure indicators have been largely positive to date, specifically for his last three Grade 1 wins in the seven-furlong Hopeful and 1 1/16-mile Breeders’ Futurity and Breeders’ Cup Juvenile. Equibase Speed Figures show steady improvement from a 97 to a 105 to a 107 for his Breeders’ Cup score. Daily Racing Form’s Beyer Speed Figures showed him improving from a pair of 92s to a 100 for the Breeders’ Cup Juvenile; and Brisnet provides a consistently strong line of 101-96-100. Very encouraging, indeed.

Running Style: In recent years – until Rich Strike shocked the world at 80.80-1 with a last-to-first rally in the 2022 Kentucky Derby – tactical speed has been a huge asset in the first jewel of the Triple Crown. While Forte profiles more as a stalker/closer than one capable of pressing or setting the pace, he was within three lengths of pacesetter Cave Rock after the opening half-mile in a 10-horse field for the Breeders’ Cup Juvenile. He does have enough tactical speed to keep him right there within striking range.

Connections: Repole Stable and St. Elias Stable purchased Forte for $110,000 at the 2021 Keeneland September yearling sale. Mike Repole made his fortune when he sold his company Glaceau, maker of Vitaminwater and Smartwater, to Coca-Cola for $4.1 billion in May 2007. He subsequently co-founded and serves as chairman of BODYARMOR Sports Drink, the fastest-growing sports drink in its category.

St. Elias Stable is the racing operation of Vincent Viola, the founder and chairman of Virtu Financial and the former chairman of the New York Mercantile Exchange. The Army veteran who also owns the National Hockey League’s Florida Panthers was a co-owner of 2017 Kentucky Derby winner Always Dreaming.

Hall of Fame trainer Todd Pletcher trained the aforementioned Always Dreaming to his Derby win in 2017 and also won the first jewel of the Triple Crown with Super Saver in 2010. Pletcher is a seven-time Eclipse Award winner as outstanding trainer with six wins in U.S. Triple Crown races to his credit.

Three-time Eclipse Award winner Irad Ortiz Jr. is the regular rider of Forte. He is still seeking his first victory in the Kentucky Derby but has won the Belmont Stakes twice with Creator (2016) and Mo Donegal (2022), the latter for Pletcher. His three Breeders’ Cup wins in 2022 gave him 17 at the World Championships for his career.

Pedigree Notes: Forte is from the sixth crop of Violence, who won the Grade 1 CashCall Futurity at 1 1/16 miles as a 2-year-old. By Medaglia d’Oro, an influential stamina sire, Violence nonetheless had some limitations as far as distance capability as a racehorse and his top progeny seem to be a combination of top sprinters and elite runners at up to about 1 1/16 miles, although there are some exceptions that can carry their speed farther.

Forte gets a nice dose of stamina from his dam (mother), Queen Caroline, by 2010 Breeders’ Cup Classic winner Blame. Queen Caroline was a five-time stakes winner, all on the grass, at distances ranging from a mile to 1 1/16 miles.

Derby Potential: It’s extraordinarily difficult to predict how a 2-year-old will mature with some time off between seasons and progress as a 3-year-old on the following year’s Kentucky Derby trail. There is a reason only two Juvenile winners – Street Sense in 2006 and Nyquist in 2015 – have gone on to win the Kentucky Derby.

Forte, however, fits the mold of a racehorse who seems to have improved with experience and added distance. There is a professionalism to him that, combined with an explosive turn of foot, makes him an exciting prospect. I’d be lying if I didn’t admit there are some distance concerns when it comes to his ability to excel stretching out to 1 ¼ miles for the Kentucky Derby, but I think Forte should absolutely develop into a top contender with a chance to win at least one, and possibly more, key preps on the path to Louisville on May 6.