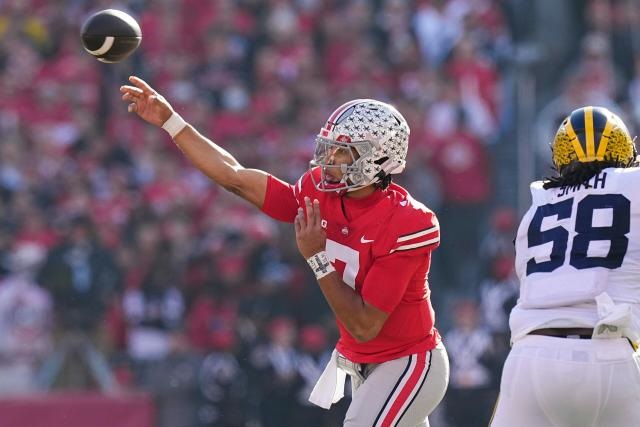 A Case for Ohio State to Win the National Championship

C.J. Stroud is throwing the football vs Michigan

Ohio State backed its way into the College Football Playoff by way of Utah’s 47-24 upset of then-No. 4 USC in the Pac-12 championship game. With a single loss to Michigan in the regular season finale, the 11-1 Buckeyes will have a chance to win a national title.

Many in the college football world are skeptical of the Buckeyes, who allowed 252 rushing yards to the rival Wolverines in that season finale loss. Still, there are a number of reasons why Ohio State can emerge as the 2022 national champion. Here are five.

C.J. Stroud capped off another tremendous season with 3,340 passing yards and 37 touchdowns. He was a Heisman Trophy finalist for the second consecutive year and led a Buckeyes’ offense that scored 44.5 points per game. That was second in the nation.

Stroud was the Big Ten Offensive Player of the Year and the conference Quarterback of the Year. He took the loss to Michigan personally and would love nothing more than to exact some revenge by winning a national championship. Stroud could be playing his final collegiate games. He would be eligible to declare for the NFL draft when his season ends.

The Buckeyes did not have TreVeyon Henderson for the Michigan game. Miyan Williams played but was clearly not 100 percent. The time off since the loss to Michigan has given both Ohio State running backs plenty of time to heal. Both should be close to, if not completely, 100 percent.  That makes an already dangerous Ohio State offense even more potent.

They are often forgotten, but the Buckeyes have a kicker and a punter worthy of a championship. Kicker Noah Ruggles has made 69-of-70 extra points and 15-of-17 field goal attempts. Punter Jesse Mirco has averaged 45 yards on 44 punts this season. In a high-profile playoff game, field position will play a key role. With Ruggles and Mirco, the Buckeyes have that covered.

This may cause some to chuckle after having witnessed the 252-yard debacle against Michigan. However, Ohio State was a top-25 run defense allowing 120 yards on the ground per game. The Buckeyes allowed just 3.4 yards per carry and did it with some personnel issues.

LB Tommy Eichenberg led the Buckeyes in tackles despite playing most of the season with two broken hands. The time off before the CFP will do the Buckeye defense some good too.

All four teams in the CFP are motivated to win a title, but it’s unlikely the other three are facing the mockery that Ohio State has endured. They aren’t supposed to be here. Interestingly, they went 11-0 before the loss to Michigan. The Buckeyes won every single game by double digits, including wins over ranked teams in Notre Dame and Penn State.

Somehow, the Buckeyes are a 7-point underdog to Georgia in their national semifinal on New Year’s Eve. That is likely an overreaction to the loss to Michigan. Ohio State is given +350 odds to win the CFP. TCU has the longest odds at +1600 at online sportsbooks.

Put that all together and you have a team that is desperate to prove itself. The Buckeyes have nothing to lose and everything to gain. That makes them dangerous and is another reason why they can win the 2022 CFP national championship.

Future “what-if” line markets actually have Ohio State favored -3 over Michigan should they both reach the championship game. So, the big hurdle for OSU is getting past Georgia then they will be favored.

If you are the conspiracy theorist type of person then it is worth mentioning that OSU vs Michigan was the highest rated college football game of the year this season. The networks and advertisers would prefer them meeting back up more than any other matchup. It would be in the best interest of the “powers that be” to make this game happen.