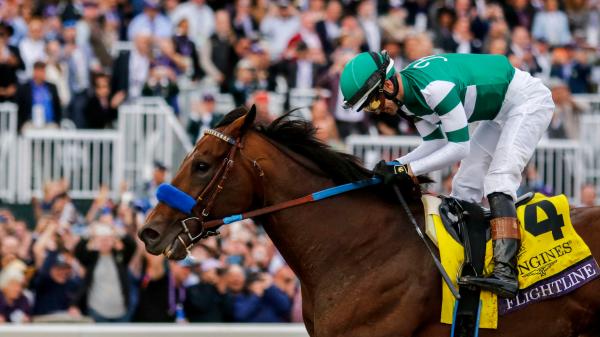 What a year 2022 has been in the sport of horse racing. The year gave us  Flightline’s ascent to superstardom and an 80.80-1 winner of the Kentucky Derby, plus so much more. Here is a list of my personal favorite races from the last year.

Racing fans had already seen what Flightline could do by the time he arrived at as the prohibitive favorite at Keeneland for the Longines Breeders’ Cup Classic, but could he do it again versus a field of the best horses in the country?  The answer was a resounding yes!  In typical Flightline fashion, he not only won the race, but he crushed the field with ease. The race was never in doubt as he effortlessly cruised to a stakes-record 8 ¼-length victory, solidifying his status in the annals of horse racing as one of the all-time greats.

Flightline was already 4-for-4 coming into the TVG Pacific Classic Stakes, but he still had one final question to answer: could he go a route distance around two turns and do it against a Grade 1 field?  What ended up happening was unforgettable as Flightline put on a show the likes of which many horse racing fans had not seen in nearly 50 years. He destroyed the field by 19 ¼ lengths and did it with ease. Race caller Trevor Denman remarked, “take a good look at this because you’re not going to see this too often, maybe never again.”

The Kentucky Derby Presented by Woodford Reserve drew a 20-horse field, but it was the also eligible No. 21 Rich Strike who got into the race at the last minute and somehow managed to post the improbable upset at odds of 80.80-1. Favorites Epicenter and Zandon ran well, but the pace was extremely fast and Rich Strike laid back far behind. From there he needed a once-in-a-lifetime ride to win, and he got exactly that from jockey Sonny Leon as he came flying home to score the shocking victory.

The 2022 Longines Breeders’ Cup Distaff drew a loaded field of the year’s top females, and the race could not have proven to be more evenly matched. The lead changed hands several times until finally three horses hit the wire together, with Malathaat, Blue Stripe, and Clairiere noses apart. In the end it was Malathaat who won the photo, and the victory should secure her an Eclipse Award for outstanding older dirt female of 2022.

One of the most exciting finishes of the year was in the Lukas Classic at Churchill Downs, which came down to a stretch battle between the two horses everyone came to see – Rich Strike and Hot Rod Charlie. Rich Strike solidified his status as a Churchill horse for the course, but it was Hot Rod Charlie who prevailed by a head after thrilling stretch confrontation.

6) Epicenter gets his Grade 1 win in the Travers

Epicenter was perhaps the best 3-year-old of 2022 with a strong résumé including wins in the Grade 2 Risen Star Stakes Presented by Lamarque Ford, the Grade 2 Twinspires.com Louisiana Derby, and the Grade 2 Jim Dandy Stakes, plus seconds in the Kentucky Derby and Preakness Stakes. Only one thing had eluded Epicenter – a Grade 1 win. Epicenter’s day finally came in the Runhappy Travers Stakes at Saratoga. Epicenter’s best race of the year was the “Mid-summer Derby,” which he won by 5 ¼ lengths.

7) Cyberknife beats Taiba in the Haskell

In another of the best stretch duels of 2022, it was Arkansas Derby winner Cyberknife who got the best of Runhappy Santa Anita Derby winner Taiba, coming up the rail and nipping him by a head at the finish of the TVG.com Haskell Stakes at Monmouth Park. Favored Jack Christopher settled for third.

8) Torch is Passed to Life is Good in the Pegasus

The $3 million Pegasus World Cup Invitational Stakes Presented by 1/ST Bet back in January represented a sort of passing of the torch, with 2021 superstar Knicks Go trying his best in his final career race but coming up short to Life is Good, who won by 3 ¼ lengths at Gulfstream Park to launch his own superstar campaign in 2022.

Taiba was running in only his second career race when he landed in the Runhappy Santa Anita Derby in what was supposed to be a heavyweight matchup between Robert Lewis Stakes winner Messier and San Felipe Stakes winner Forbidden Kingdom. Taiba proved up to the task. He scored the upset win with Messier 2 ¼ lengths back in second.

Belmont Park didn’t host a fall season in 2022 and its spring/summer dates seemingly continue to get taken over by Saratoga. Big Sandy did get to shine in the spotlight for one memorable day in 2022, however, when Mo Donegal won the third jewel of the Triple Crown, taking the Belmont Stakes Presented by NYRA Bets over stablemate Nest. Earlier on the card, Flightline kept his undefeated record unblemished with a six-length win in the Hill ‘n’ Dale Metropolitan Handicap, aka the Met Mile.