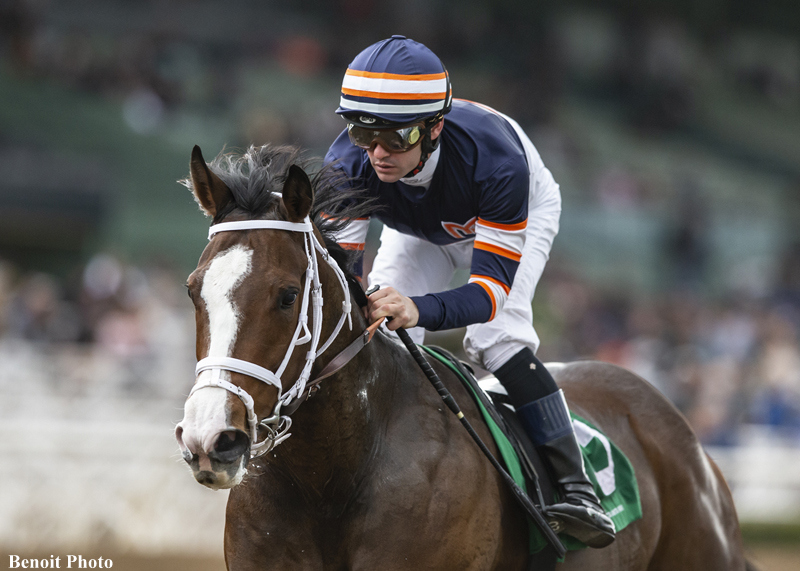 A nose shy of being unbeaten in eight starts, three of them stakes, Nick Alexander’s homebred Becca Taylor tries graded stakes competition for the first time as she returns to Santa Anita to head Saturday’s Grade 3, $100,000 Desert Stormer Stakes as five fillies and mares three and up go six furlongs.

Trained by Steve Miyadi, California-bred Becca Taylor, who was second, beaten a nose two starts back in the Irish O’Brien Stakes at 6 ½ furlongs down the hillside turf course, ventured to Golden Gate Fields on May 7, where she pressed the pace and posted a one length allowance victory going six furlongs on synthetic Tapeta as the 1-5 favorite.

A 1 ¼ length winner of the statebred Spring Fever Stakes at six furlongs on dirt three starts back Feb. 21, Becca Taylor is unbeaten three tries on dirt, two of them in statebred stakes at Santa Anita.

A 4-year-old filly by Old Topper out of the General Meeting mare Lady Sax, Becca Taylor will get the first-time services of Santa Anita’s leading rider Juan Hernandez. With seven wins and a second place finish, “Becca” has earnings of $319,160.

On a five-game winning streak, but overmatched in the G2 Zenyatta Stakes Oct. 3, trainer Ruben Alvarado’s Samurai Charm returns to action on Saturday with regular rider Kyle Frey up. Quick from the blocks at any distance, Samurai Charm took the ungraded Dark Mirage going a flat mile at Los Alamitos two starts back on Sept. 19 and will sprint for the first time in four starts, dating back to a starter allowance score going 5 ½ furlongs at Los Al. on July 2.

In her first start in seven months, Mark Glatt’s Dance to the Music served ample notice that she’s back and is again ready for stakes competition. A $575,000 2-year-old in training sale purchase a year ago April, Dance to the Music was an impressive first-out winner going 5 ½ furlongs at Del Mar July 24 and came back to run a well beaten second at 3-1 in the G1 Del Mar Debutante on Sept. 5. Subsequently well beaten here in the G2 Chandelier Stakes Oct. 1, this 3-year-old filly by Maclean’s Music went to the sidelines and came back running at even money May 7, pressing the early pace and posting a three quarter length allowance win under Abel Cedillo, who rides back on Saturday.

Owned by Red Baron’s Barn, LLC and Rancho Temescal, LLC, Dance to the Music, who is out of the Congrats mare Beautified, registered a career-best 81 Beyer Speed Figure in her comeback race. With an overall mark of 4-2-1-0, she has earnings of $143,900.

Owned by Tommy Town Thoroughbreds, Dynasty of Her Own is a Kentucky-bred mare by Shanghai Bobby out of the Richter Scale mare Lady Dynasty. Winless in two Santa Anita main track starts, she’s 22-11-0-5 overall with earnings of $310,070 and will be ridden by Ricky Gonzalez.

First post time for a nine-race card on Saturday is at 1 p.m.