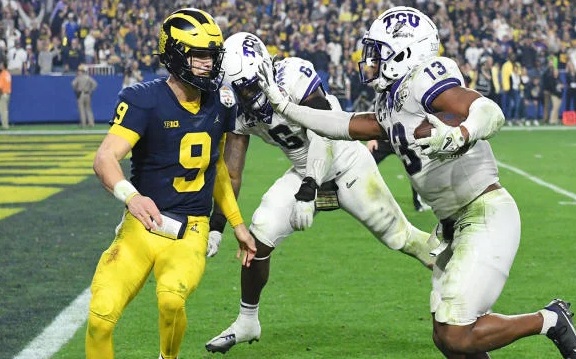 An Epic Weekend of College Football That Shouldn’t Have Happened

No. 1 Georgia held on for dear life as Ohio State kicker Noah Ruggles’ 50-yard field goal attempt was no good. The Bulldogs 42-41 victory advanced them to the CFP national championship next week. Prior to Georgia’s win, No. 3 TCU pulled a dramatic 51-45 upset of No. 2 Michigan.

What a day for college football, right? Not exactly.

The weekend’s two semifinal games shouldn’t have been played. Wait…what? Yes, you read that correctly. Don’t be so surprised. It’s all in the College Football Playoff’s mission statement.

Taken directly from the College Football Playoff website is an overview of what the CFP is all about.

football’s national champion on the field, while emphasizing the significance

of college football’s unique regular season where every game counts.”

The College Football Playoff is about one thing – money. That’s why it will expand to 12 teams in 2024, which actually goes against the mission of the CFP.

Let’s begin with the final three words of the CFP’s mission…every game counts. Does it? Does every game really count?

If every game counted, then why was Ohio State playing in a national semifinal? The Buckeyes lost their regular season finale to Michigan. Doesn’t that game count? So, 11-1 Ohio State which lost to Michigan already deserves to be in a national championship scenario with the team it already lost to.

Settle it on the Field

It’s right there in the mission statement. “On the field.” Isn’t that what college football wants? To settle it on the field?

The point here is that the CFP talks about settling it “on the field” and “every game counts” but, in reality, they don’t care about either. They care about dead Presidents, denira, cash money.

USC, Penn State, Tennessee, Alabama…all good football teams. All had two losses. Does that settle it on the field? Did every game count? If they all counted, then why didn’t Georgia just play Michigan for the national championship?