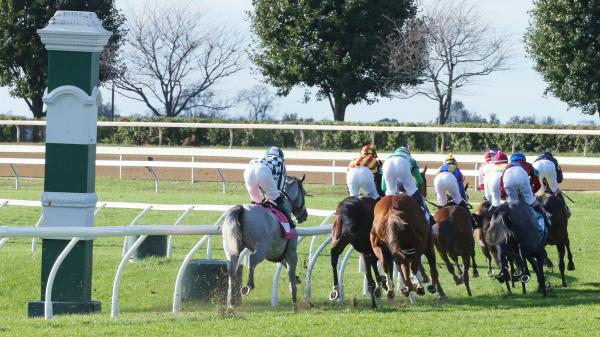 A field of seven is lined up for the $600,000, Grade 1 Queen Elizabeth II Challenge Cup Stakes Presented by Dixiana Oct. 15 at Keeneland Race Course, which is only open to 3-year-olds that have been invited to participate. The late monarch attended the inaugural running of this race in 1984, and many of the winners have gone on to great accomplishments, the most recent being Rushing Fall in 2018, who earned nearly $3 million in her career.

Leading this year’s field is McKulick, one of two entrants from the barn of Chad Brown, currently the leading North American trainer by earnings. This filly has earned $1 million to date and enters the race off a win in the similar Grade 1 Jockey Club Oaks Invitational Stakes at Belmont at the Big A in September. Her stablemate is Gina Romantica, who sports a 3-for-6 career record including a runner-up effort in the Grade 3 Pebbles Stakes, also in September. European import Paris Peacock enters the race riding a two-race winning streak including the Group 3 Denny Cordell Lavarack & Lanwades Stud Stakes in Ireland on the same day McKulick won at Saratoga. California Angel earned the biggest win of her career one year ago this week when posting the 17.80-1 upset in the Grade 2 JPMorgan Chase Jessamine Stakes and she may be rounding back to top form following a third-place effort in the Dueling Grounds Oaks last month. Bellabel ships in from California, having never been worse than second in three starts since coming over from her native Ireland, the most recent a runner-up effort in the Grade 1 Del Mar Oaks. New Year’s Eve won three her first four career starts, including the Grade 2 Edgewood Stakes Presented by Forcht Bank in May, but has fared no better than third in three starts since. She’s Gone rounds out the field off an allowance level win and is running in a stakes for the first time.

Paris Peacock, pegged at odds of 10-1 on the morning line, can post the mild upset over the very talented McKulick in this year’s Queen Elizabeth II Challenge Cup Stakes. This filly had some hard luck to start her career when finishing second five times and third once in her first six races. Two races later the light bulb went on as she won in August, and then came her breakout performance on Sept. 17 in the Lavarack & Lanwades Stud Stakes. In that race, facing 15 opponents, Paris Peacock rallied from mid-pack and engaged the leader with 100 or so yards to go, and then slowly inched away at the end. She had shown the same kind of winning spirit one month earlier when beating 11 other horses and earning a 97 Equibase Speed Figure, which she then boosted to a new career-best 107 figure in the Lavarack & Lanwades Stud.

Paris Peacock is trained by Jessica Harrington. Many American racing fans may not be aware of who the trainer is, so I will share her record. Harrington’s horses have earned millions each of the last five seasons in Europe, including multiple Group 1 wins. In her career through over 13,000 starts, she’s saddled the winner or runner up in nearly one-third (4,100) of those races. Paris Peacock gets the services of Florent Geroux, who is seventh among all jockeys in North America in 2022 with more than $13 million in earnings. All in all, I expect Paris Peacock to continue to improve in her first start in North America and win this race.

McKulick has done little wrong in seven career starts, all in the U.S., even though she was bred in Great Britain. She’s finished first or second in six of those seven races, including five times in graded stakes. Her best effort came in her most recent start in the Jockey Club Oaks Invitational, in which she made a quick move from fourth on the far turn to get the lead and won by a half-length at the end, earning a 111 figure. Prior to that, she earned a 107 figure when finishing second in the Saratoga Oaks Invitational Stakes, so she is certainly capable of taking another step forward and running even better. On the other hand, McKulick earned a 112 figure winning the Belmont Oaks Invitational Stakes in July so that effort and her last race may be the best she can do, while as noted above, Paris Peacock may have more improving to do off her most recent race. In any event, the battle between these two fillies could prove to be an exceptional one to witness.

California Angel won a turf route in her career debut 13 months ago, no easy feat in and of itself.  Then, two races later, she won the Jessamine Stakes on the Keeneland turf course with a visually impressive effort as she rallied from 12th of 13 while traveling eight paths wide turning for home, getting up by a head at the end. Last fall after the big win at Keeneland, California Angel wasn’t disgraced a bit when only beaten four lengths in the Breeders’ Cup Juvenile Fillies Turf. After poor tries on dirt she went back to turf for a fine runner-up effort in the LaCombe Memorial Stakes in March. Taking six months off following that effort, California Angel returned for a fine third of 11 finish in the Dueling Grounds Oaks last month, earning a new career-best 100 figure in the process. She’s likely to improve back on the Keeneland turf she showed an affinity for last fall and also second off the layoff, which makes California Angel a legitimate long shot contender in this field.