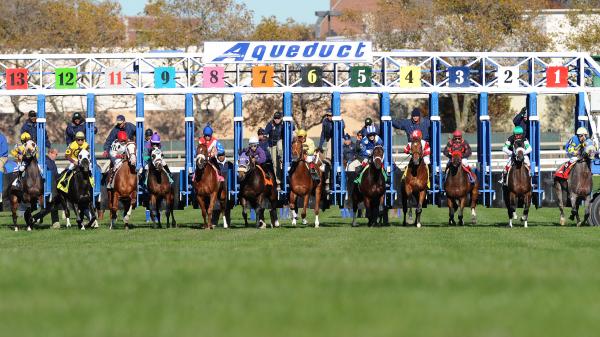 ‘Belmont at the Big A’ Betting Guide: Tips, Trends to Know for Upcoming Meet

There will be a new wrinkle in the New York racing schedule this fall when racing returns downstate following the end of the Saratoga Race Course meet on Labor Day. Instead of the usual fall meet at Belmont Park, racing will move to Aqueduct for a 28-day fall meet being called “Belmont at the Big A.”

The season begins Thursday, Sept. 15 and will run four days a week, Thursdays through Sundays, through Oct. 30. A construction project building pedestrian and vehicular access tunnels into Belmont’s infield necessitated the move. Racing will return to Belmont Park in spring 2023.

Racing fans can expect the usual high-class day in and day out racing they’d expect to find at Belmont Park, except at Aqueduct instead. Plus, lots of important stakes races. Belmont at the Big A’s 41 stakes including 23 graded stakes will offer a total of $9.9 million in purses.

Trainers to Watch at the Big A

Chad Brown took home yet another Saratoga training title at the recently concluded Saratoga meet. Brown won the Spa training title with 42 wins (21 %), fending off a strong performance from Todd Pletcher who trained 38 winners (24%). Brown led all Saratoga trainers by a wide margin in turf wins with 30. Pletcher led by a wide margin on the main track with 25 wins. Both should continue to lead in those respective categories at Aqueduct.

Stables that often do well at this time of year in New York should also be good plays at Belmont at the Big A. At last year’s corresponding Belmont fall meet, trainers that did exceptionally well included Linda Rice, who won with 16 of 60 starters for 27%, and Saffie Joseph Jr. who win five races from only 12 starters for 42%. Also don’t forget about Rudy Rodriguez. He endured the worst Saratoga meet of his career this year with a record of 3-for-94, but he tends to win downstate in the fall and last year had 15 wins from 80 starters for 19% at Belmont.

When it comes to the jock’s room, the Belmont at the Big A jockey colony will be the strongest you can find anywhere this time of year. The meet riding title is likely to come down a battle between 2022 Saratoga champion jockey Irad Ortiz Jr. and several other jockeys who were all prominent at last year’s Belmont fall meet, which also was won by Irad Ortiz with 33 wins. Those who could give him a run for his money for the 2022 Belmont at the Big A riding title are his brother Jose Ortiz (32 wins at the corresponding 2021 Belmont fall meet), Luis Saez (31 wins), and Dylan Davis who had 29 wins last fall and then came-up just one win shy of Irad Ortiz at Belmont’s spring/summer meet.

Handicapping Trends at the Big A

Racing at Aqueduct will have plenty to offer horseplayers, including top 2-year-olds, the best turf racing of the season, plus the above-mentioned fall stakes program. Most of the horses running at Belmont at the Big A will be exiting starts at Saratoga. When evaluating horses’ form from Saratoga when they return downstate in the fall, you can learn from trends at the recent Saratoga meet and by looking at New York fall race meet results from the recent past.

The Aqueduct main track mostly plays fairly to all running styles. If anything, off-the-pace runners might even have a slight edge because Aqueduct usually has fewer wire-to-wire winners than the other main tracks on the New York circuit.

Post positions are amazingly fair on the Aqueduct main track. In a 1,299-race sample from November 2017 to present, every dirt route post position has won for nearly the same win percentage, all in the 12-16% range. Posts 9 and outward are rarely in play. In dirt sprints, it’s more of the same, with every post position in the 1,927-race sprint sample winning between at between 10% (post 11) and 16% (post 4).

If you are looking for an edge for the horses arriving from Saratoga, it seems that horses breaking from posts 9 and outward in dirt sprints were disadvantaged by their post draw this season at Saratoga. Horses from posts 9-12 went a combined 4-for-59 for 7% wins.

Turf Trends at The Big A

In Aqueduct turf routes, the inside two post positions are the best places to be with win rates of 16% and 14% respectively in a 321-race sample dating back to 2017. That said, horses also have fair chances from middle and outside posts, and no turf route post position all the way out to 12 has been an overwhelming disadvantage. This means you can look for live overlays from the outside posts in Big A turf routes, because bettors often overlook outside turf horses which allows them to go off at good odds.

In turf sprints, Aqueduct does not play like Belmont and Saratoga which both tend to favor middle and outside posts. In the Big A’s turf sprints, the inside horses do well. Horses breaking from posts 1-6 have the best win percentages, and the rail horse does particularly well with 15% wins in Big A turf sprints from a 186-race sample.

In terms of the horses arriving from Saratoga, keep in mind that horses from outside posts generally did poorly this season. On the outer turf course, 23 of the 29 turf route winners broke from posts 1-6. On the inner turf, amazingly, all but three of the 91 winners broke from posts 1-8. The outside horses in those races won just three of 103 starts (3%). When you see horses exiting turf losses on either course at Saratoga from outside post 6, upgrade them at Aqueduct if they draw a better post.