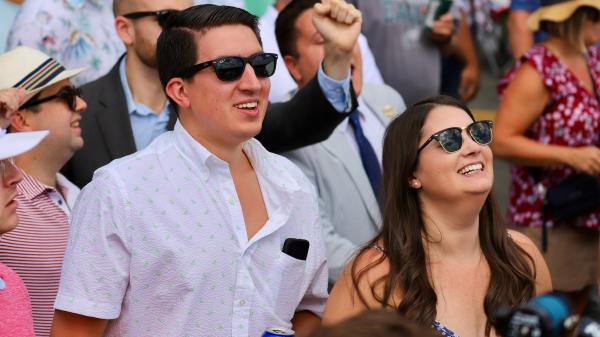 #5 Ansel: He was a beaten favorite in his most recent outing despite being positioned well throughout much of the race. His most impressive outing was two starts back off a similar type of trip where he just missed finishing third, beaten just over a length. Saturday, he makes his first start on the dirt and draws a good post to work with in the center of the gate.

There are a lot of question marks as to how he will perform on the surface change to dirt, but I’m willing to give him a shot given the fact that he has three races of experience under his belt, and his two most recent outings had him positioned very well off stalking trips.

#7 Channel Cat: He gets blinkers added in this race which help him keep his focus in the stretch. What I like most about this horse in this spot is that he gets to race at a shorter distance, and it also looks like he’s one of the only horses in here likely to be vying for the front end. He’s too good of a horse to leave on the lead without much pressure, and I do think that if John Velazquez can get him settled upfront early on and get away with some manageable fractions, he’s going to be incredibly difficult to track down late.

Expect him to go off somewhere around his 4-1 odds on the morning line, perhaps a bit higher, and I think that’s sufficient enough in terms of value.

#2 Midcourt: There are legitimate concerns in here for some of these horses at the route distance, as most have excelled racing much shorter. This gelding is definitely the exception, as his best efforts have been racing at this 1 1/8-mile distance. It also helps that he has hit the board in all five career starts at Del Mar, so that familiarity is a positive.

What also helps this gelding is that he draws inside of most of his main rivals. He’s capable of showing a lot of early speed which should have him positioned well early on, likely in a stalking trip behind some of the pacesetters early.

#2 Isolate: He enters Sunday’s contest off his two best Brisnet Speed Figures, just missing in both of those tries. He should also be a lot sharper making his third start after nearly nine months away. This time around, he makes the move to a new barn for trainer Tom Amoss and now gets a top jockey in Joel Rosario on board.

In terms of fitness, he definitely looks ready coming in off two back-to-back bullet works in early November. Look for this colt to capitalize getting to face easier competition in this spot.