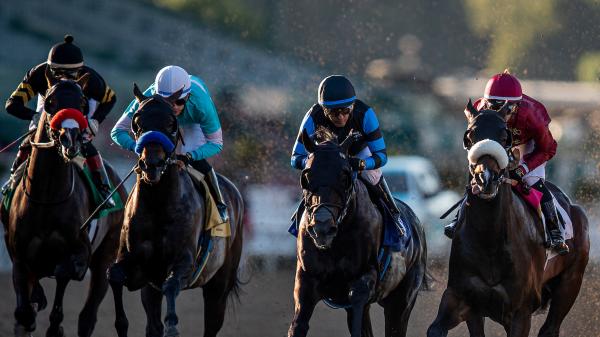 Last weekend, Epicenter won the Risen Star Stakes Presented by Lamarque Ford at Fair Grounds to vault to the top of the Kentucky Derby points leaderboard. Saturday, the next Derby prep is on tap at Oaklawn Park as the $1 million Rebel Stakes offers 50 qualifying points to the winner, 20 to the runner-up, 10 to the third-place finisher, and 5 to fourth.

Though he lost the Feb. 19 Risen Star Stakes Presented by Lamarque Ford, he won support in this corner with this third-place finish after a poor start. It was a disastrous beginning for the Remsen Stakes runner-up, and yet he managed to rally wide to be a third behind Epicenter and Smile Happy , both of whom enjoyed better trips. Little seems to separate these three talented colts, but this 3-year-old may have the most upside out of what was the strongest prep on the Road to the Kentucky Derby to this point in the year.

With jockey Corey Lanerie riding him patiently from seventh to avoid a wide move on the second turn in the Risen Star, this colt found a seam between horses in the stretch and finished well. He outkicked Zandon for the place after the latter had rallied past him in early stretch, though both were only just a little bit ahead of longshot fourth-place finisher Pioneer of Medina at the wire. The 2021 Kentucky Jockey Club Stakes victor can build upon his return.

In contrast to the Lecomte Stakes, when he was pushed into fast splits and finished a close second, he faced limited pace pressure in the Risen Star and took advantage in a frontrunning score. Though his lead diminished in the final furlong, from 4 ½ to 2 ¾ lengths, he was confidently handled by Joel Rosario to defeat Zandon and Smile Happy in their kickoff races of the season.

Pointed toward a March return, last year’s runaway Claiborne Breeders’ Futurity winner recorded his longest breeze this year with a five-furlong move in :59.65 at Gulfstream Park Feb. 19. Slapped on his right shoulder down the lane after drifting out briefly the turn, he pulled well clear of his company, the twice unplaced maiden Make Way. Xbtv.com video shows both horses being noticeably warm in the South Florida weather.

Trainer Saffie Joseph Jr. reported last week that this colt exited the Holy Bull Stakes in good condition while he awaits the April 2 Curlin Florida Derby at Gulfstream. Though he was overlooked a bit at 6-1 odds in the Holy Bull, he won’t slip past anyone in the Florida Derby. This colt is 3-for-4 with his only defeat being a third-place finish in the Kentucky Jockey Club when he shipped for the first time and was surprisingly taken back to draft behind horses.

He returned to the work tab this past Saturday with an easy half-mile in :51.13 at Palm Beach Downs. Merely seeing him back in action two weeks after his third in the Holy Bull is a promising sign, irrespective of the slow time. Hall of Fame trainer Todd Pletcher figures to get more serious with him as he gears the colt up for his second race of 2021 over a 1 1/8-mile prep that will suit him better than the short-stretch 1 1/16 miles of the Holy Bull.

Though he won the Feb. 12 Sam F. Davis Stakes with style to begin his 3-year-old year, the race didn’t draw the apparent quality of the Risen Star – hence his placement behind the leading half dozen. As a juvenile, he wasn’t quite on par with Rattle N Roll and Smile Happy, both of whom beat him in graded stakes, though much can change from ages 2 to 3. Speedy but not speed-crazy, he should consistently enjoy good trips as he continues down the Triple Crown trail.

A class test awaits in stakes company for his next start, likely in the Fasig-Tipton Fountain of Youth Stakes March 5 at Gulfstream Park. Todd Pletcher gave him a still five-furlong move in 1:00 1/5 at Palm Meadows this past weekend as he tightens the screws. Perfect in two starts, he won a mile maiden race by 6 ¾ lengths Dec. 11 before stretching out to two turns and whipping outclassed allowance optional claiming company at Tampa Bay Downs Jan. 30, with both victories coming in fast time.

His race in the Holy Bull was similar to Zandon’s in the Risen Star in that he dug a hole for himself, caught the eye with a threatening second turn rally, and then flattened in the lane. His runner-up finish was a fine effort, though I would have liked to have seen him switch leads down the stretch. He was given a cue to switch leads by his rider and did so in a bullet five-furlong solo workout :58.62 at Gulfstream this past Saturday.

Coming off a Feb. 4 allowance optional claimer score at Gulfstream, in which he defeated a couple of highly regarded colts from the Pletcher stable, he looks like a graded stakes horse in the making. That recent victory at a mile, coupled with a route pedigree and a 2-for-3 overall record, suggests he should fare well in future two-turn attempts.

Having dusted maidens at Gulfstream by 8 ½ lengths in his second start, running a mile in 1:35.55 with a 103 Equibase Speed Figure, Todd Pletcher has indicated a stakes try on the Road to the Kentucky Derby is under consideration. This colt seems of that quality as he possesses speed, talent, and pedigree. Even his second-place finish on debut Jan. 8 was a high-level performance, a neck loss to the now Grade 3-placed Volcanic.

Though Bob Baffert-trained Newgrange is the favorite in Saturday’s Rebel Stakes at Oaklawn Park, this colt lands in the Dozen and Newgrange does not, owing to Baffert’s suspension at Churchill Downs Inc.-owned tracks for medication violations. This colt took a leap forward when stretched out to two turns, whipping first-level allowance optional claiming foes Jan. 14, and plenty of spacing leaves him poised for another peak performance.

2022-02-24
Previous Post: PokerNews Podcast: Everything You Need to Know About the 2022 WSOP Schedule!
Next Post: Napoli vs Barcelona Europa League Odds, Time, and Prediction