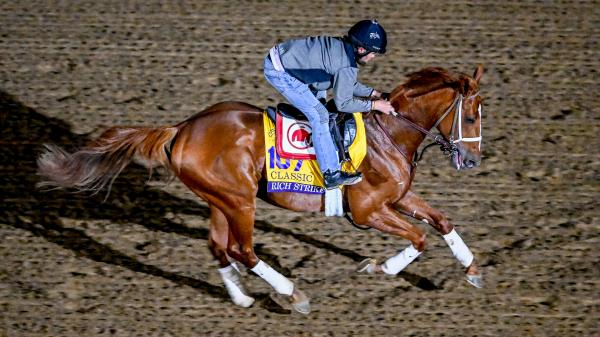 There is an old saying in horse racing – “pace makes the race” – that is a core tenet of analyzing races. Essentially what it means is that how fast a race in run in the early stages and how many horses vie for the lead plays a major role in which runners have the best chance to win.

A talented front-runner thus would be formidable in a race in which he or she profiles as the only horse expected to show early speed. Toss in three other pacesetters or press-the-pace types and suddenly the race would seem to set up much better for the runners coming from off the pace since a contested, fast early tempo is far more likely to occur. That is a rudimentary explanation of the “pace makes the race” adage, but you catch the drift.

None of the runners entered for the $750,000 Clark Stakes Presented by Norton Healthcare Friday at Churchill Downs is more pace dependent than 2022 Kentucky Derby Presented by Woodford Reserve winner Rich Strike (#4), and none has more riding on the Grade 1 race.

A win would propel Rich Strike firmly into the conversation for the Eclipse Award as champion 3-year-old male with a Derby win and a Grade 1 victory against older horses. None of the other U.S.-based contenders in the division can boast that combination of marquee division win and Grade 1 win against older runners.

Rich Strike profiles as a one-run closer and his late turn of foot was ideally set up in the Kentucky Derby by a blistering-fast opening half-mile in :45.36. With little speed entered in the Clark, Rich Strike will very likely have to be much the best to win the 1 1/8-mile race.

On the bright side, he is not facing an especially stout group as he’s the lone previous Grade 1 winner among seven entrants and one of four graded stakes winners. Rich Strike also has run very well on the main track at Churchill with two wins and one second in three starts under the Twin Spires.

In his most recent start at the Louisville track, Rich Strike raced closer to the pace early in the Grade 2 Lukas Classic Stakes on Oct. 1 and came up just a head short of Hot Rod Charlie, an older horse who probably would be an overwhelming favorite here. Rich Strike enters the Clark off a fourth-place finish in the $6 million Longines Breeders’ Cup Classic and I expect him to run well.

Like Rich Strike, Proxy has been battling quality competition all year and has held his own against the likes of Olympiad, Scalding, and Dynamic One while running second twice and third twice in stakes races in his last four starts following an allowance win in his season debut. He’s been rested since finishing third in the Grade 2 Stephen Foster Stakes on July 2 and appears poised to run a big one here with back-to-back strong workouts.

West Will Power enters on a two-race winning streak and has a tactical advantage as the lone dedicated front-runner in the field. He won the Grade 2 Hagyard Fayette Stakes by 6 ½ lengths while leading from start to finish Oct. 29 at Keeneland. He earned a 113 Equibase Speed Figure with that race and is a top win candidate if he can duplicate that performance.

I’m hoping to get a decent win price on Proxy with the name recognition of Rich Strike in the field and I’ll play him with Rich Strike and West Will Power in an exacta bet as well.