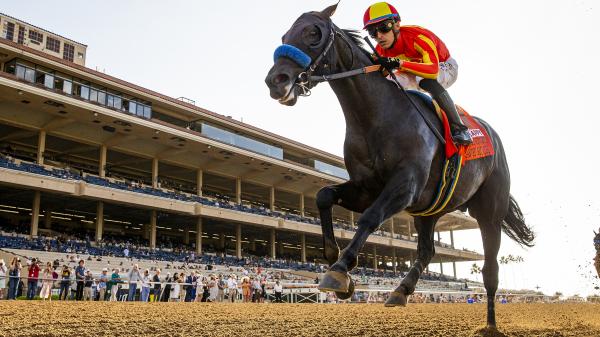 Mike Pegram, Karl Watson, and Paul Weitman clinched the Del Mar owner title some time ago, and they finished up in style. Cave Rock and Havnameltdown ran 1-2 for them in the Sept. 11 Runhappy Del Mar Futurity, also extending Bob Baffert’s domination of the race. The Hall of Fame trainer won his 16th Del Mar Futurity.

Cave Rock, a six-length maiden winner, found no difficulty jumping into Grade 1 competition. He annihilated the field and beat his graded stakes-winning stablemate by 5 1/4 lengths. It was a bittersweet tribute to Cave Rock’s sire, Arrogate, whose daughter And Tell Me Nolies won the TVG Del Mar Debutante a day earlier. The outstanding performance of Arrogate’s offspring, which includes 2022 Longines Kentucky Oaks winner Secret Oath, underscores just how much the industry lost when Arrogate died far too young, at age 7 in 2020.

Despite Havnameltdown’s victory in the Aug. 14 Best Pal Stakes at Del Mar, bettors preferred Cave Rock’s brilliant maiden win the day before. They sent Cave Rock off as the 2-5 favorite in the Futurity, with Havnameltdown the second choice at 6.50-1 in the nine-horse field.

Juan Hernandez had ridden both of them in those races, and he also piloted Baffert’s third Futurity runner, Newgate, in his debut, a 3 1/2-length score at Del Mar July 30. Hernandez stuck with Cave Rock, and Baffert named Mike Smith on Havnameltdown and John Velazquez on Newgate.

Once the starting gates opened in the seven-furlong Futurity, it took very little time for the two Pegram, Watson, and Weitman runners to zip away from the others. Even with Havnameltdown coming in and brushing Cave Rock slightly, the two of them almost immediately controlled the race, Cave Rock edging ahead of Havnameltdown to take the lead.

Despite Havnameltdown not really applying much pressure to Cave Rock, the favorite posted swift fractions. He raced the first quarter-mile in :21.56 and went the half in :43.56. But he accomplished it so fluidly that it never looked as if the fast times would hinder his chance at victory.

“He broke a step slow, but then he got right in gear,” Hernandez said. “I tried to slow him down some, but he wasn’t having it. So, I just let him go on and do his thing.”

Around the turn, Skinner surged forward on the outside, but ultimately he would be battling with Newgate for third. In the stretch, Cave Rock drew away from Havnameltdown, who did the same to the rest. It was 5 1/4 lengths between them and then another 4 1/4 lengths to third-place Skinner.

“When we hit the quarter pole, I asked him and he changed leads and took off,” said Hernandez. “He just wanted to go. He’s something.”

Baffert’s run on the Futurity began in 1996 with Silver Charm. He saddled seven consecutive winners of the race without a miss, the final one in that string being Icecoldbeeratreds in 2002 for Pegram. His 11 winners since then include Lookin At Lucky in 2009 and Drill in 2011 for Pegram, Watson, and Weitman, and American Pharoah for Zayat Stables in 2014. American Pharoah went on the next year to become the first Triple Crown winner since Affirmed in 1978.

Hernandez, the leading rider at the Del Mar meeting, won his first Del Mar Futurity. It was his 12th stakes win at the meeting.