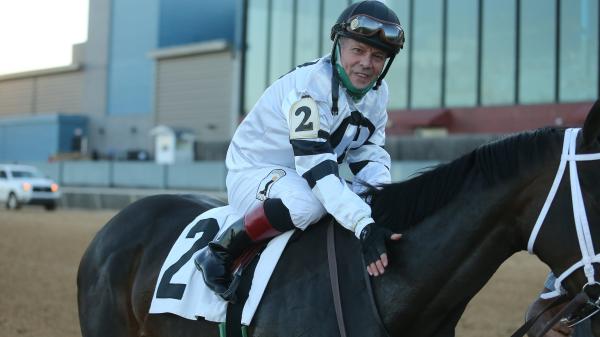 Court, Oldest Rider to Compete in Kentucky Derby, Aiming for Return at Age 61 With Ben Deisel

Tom Pedulla is interviewing prominent owners, trainers and jockeys as they travel the Road to the 148th Kentucky Derby Presented by Woodford Reserve on May 7 at Churchill Downs.

Jon Court is featured this week. He was 58 when he became the oldest jockey to compete in the Kentucky Derby, riding Long Range Toddy to a troubled 16th-place finish in 2019. Court is on the Derby trail again with Willis Horton’s homebred Ben Diesel.

The son of Will Take Charge, trained by Dallas Stewart, faces a huge test when he breaks from post-position seven in a field of 11 for the $1 million Rebel Stakes on Saturday at Oaklawn Park. Ben Diesel comes off a third-place effort in the $750,000 Southwest Stakes on Jan. 29 at Oaklawn. The 1 1/16-mile Rebel offers Derby qualifying points to the top four finishers on a 50-20-10-5 basis.

Court, 61, owns more than 4,200 career victories for purse earnings that surpass $110.8 million. In 2007, he won the George Woolf Memorial Award for setting high standards of personal and professional conduct on and off the track. He counts the Rebel among his major victories, capturing that race aboard Will Take Charge, Ben Diesel’s sire, in 20l3.

Court participated in a question-and-answer session conducted on behalf of America’s Best Racing:

PEDULLA: I see you have been aboard Ben Diesel for all of his career starts. What did he show you when he won his debut on Oct. 31 at Churchill Downs?

COURT: He won that pretty handily, but he showed me he was still green. His first time out, that’s to be expected. He’s gotten himself far more educated with each [race]. With that being said, I look forward to the direction he’s heading. They have to mature quick with this kind of racing caliber.

PEDULLA: Could you take me through the Kentucky Jockey Club Stakes, where he finished fourth?

COURT: He was a little aggressive down the backside. It took him awhile to settle. He just wanted to go ahead and make an early move. I was instructed by the trainer to wait as long as I could, which I agreed with because the Churchill stretch is very long. He made his run. He just came up a little short.

PEDULLA: When he finished seventh in the Smarty Jones Stakes, did he not like the sloppy track that day?

COURT: No, that wasn’t the case so much as he came from the outside and we let him use his natural speed to get over and save ground. He had not really been in mud and on the slop before. He just tired. Again, he’s still getting educated.

PEDULLA: Was his third-place finish in the Southwest somewhat encouraging?

PEDULLA: Do you think Ben Diesel is starting to put it all together?

COURT: He’s really starting to put it together with his mind, which is always exciting with these juvenile horses.

PEDULLA: What did it mean to you when you became the oldest rider to compete in the Derby?

COURT: It meant a lot. Any time you get to the Derby, you’re able to achieve one of your lifelong, childhood dreams. If that’s the record, it gives me something to pursue as far as breaking my own record.

PEDULLA: Is setting goals one of the things that keeps you going?

PEDULLA: Jon, do you feel you have lost anything to time? If you have, how do you make it up on the track?

COURT: Well, I’ve lost my youth but not my vitality. I’ve still got plenty of that. I can’t really contribute anything that I’m shortchanged on with my age other than because some people feel old at a certain age, they assume I do as well. I’ve still got balance. I’m winning races. I’m producing results. I can get on my belly and scrub with the youngest and the oldest. It’s just a point in my career where I’m really enjoying it, and I feel extremely blessed and fortunate to be in this position at this age and to be able to compete with the best of the best.

PEDULLA: To some degree, you are defying time. What do you attribute that to?

COURT: I do some activities, but I also work with the horses on a regular basis. A lot of that is a way of life now. As far as my diet, I’m in a good place where I can eat comfortably and I can eat what I want. I don’t eat as often as most people do.

PEDULLA: What are your expectations for Ben Diesel in the Rebel?

COURT: My expectations are to win it and go on to the Arkansas Derby, if that is what they want to pursue, and then the Kentucky Derby, Preakness, and Belmont [Stakes], whatever direction they want to go. Have saddle, will travel.

PEDULLA: You feel he has Derby ability?

COURT: I do. He’s training forwardly. Physically and mentally, they have to develop equally. He’s already proven he can compete with the upper caliber of the [3-year-olds] he’s competing against. It’s a matter of producing the results we need to continue to do so.

PEDULLA: I am sure you are asked this all the time, but how much longer do you want to continue riding?

COURT: I get asked that quite frequently. I’m just going day by day, to be honest with you. I have nothing but the utmost trust and faith that when it becomes time, I’ll know. I want to bow out gracefully and not be taken out by any injury or anything.