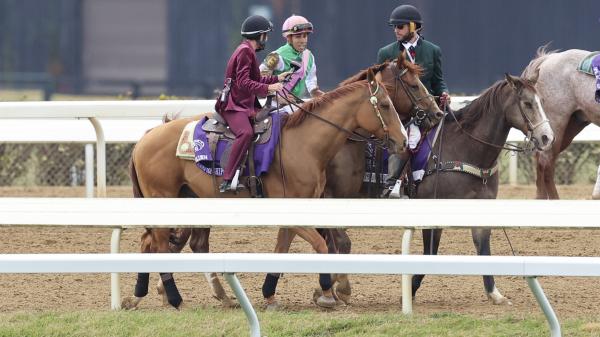 Champion Whitmore may be retired, but he got in on the Breeders’ Cup action Nov. 5 at Keeneland Race Course nevertheless.

“So Whitmore, being the champion he is, showed up when I really needed him which was for the post-race interview with Irad Ortiz Jr. after he won the Sprint,” Brothers said. “Before the race he was a little bit nervous. He was standing there with a couple of the other ponies but when those ponies walked off and the wind picked up, he did do a walking sort of presentation at that point. But he did as well as you could expect him to do and he showed up like a true champion for the post-race interview.”

Retired from racing at the end of 2021 after amassing 15 wins, 13 seconds, and five thirds from 43 starts with earnings of $4.5 million for trainer Ron Moquett, who owned him in partnership with Robert LaPenta and Head of Plains Partners. Whitmore has been in training with Laura Moquett to pursue a second career as a pleasure mount.

He competed Oct. 15 in the competitive trail division of the Retired Racehorse Project’s Thoroughbred Makeover, the largest Thoroughbred retraining competition in the world for Thoroughbred racehorses.