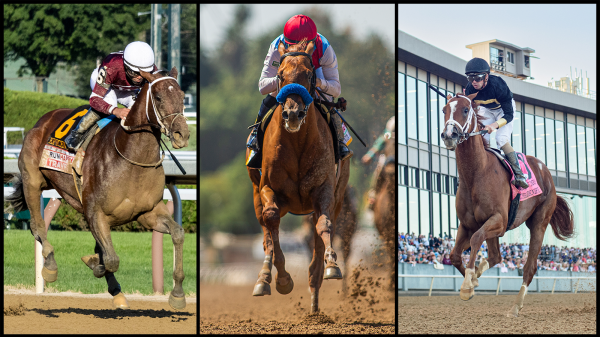 While the Breeders’ Cup settled most of the questions about the 2022 Eclipse Award winners, one important category may not be decided until the final days of the year.

Bob Baffert’s plans to run Taiba in the Dec. 26 Runhappy Malibu Stakes at Santa Anita Park has created the possibility that the 3-year-old son of Gun Runner could finish the year with a résumé that features three Grade 1 wins. In contrast, the retired clubhouse division leader, Epicenter, has one Grade 1 victory in the race for the award as the year’s best 3-year-old male.

Owned by Zedan Racing Stables, Taiba will enter the seven-furlong, $300,000 Malibu — which was won by Flightline last year — with Grade 1 victories in the Pennsylvania Derby and Runhappy Santa Anita Derby as well as a second in the TVG.com Haskell Stakes and a third most recently behind Flightline in the $6 million Longines Breeders’ Cup Classic.

His lone disappointing try in six career starts this year was a 12th in the Kentucky Derby Presented by Woodford Reserve.

Epicenter, who suffered a career-ending lateral condylar fracture of the right foreleg in the Classic, captured the Runhappy Travers Stakes for his most important victory. Though the Mid-Summer Derby was his lone top-level win, he was second in two of the Triple Crown races, the Kentucky Derby and Preakness Stakes. A winner of 4 of 8 starts in 2022, Winchell Thoroughbreds’ son of Not This Time also registered victories in the Jim Dandy Stakes, Twinspires.com Louisiana Derby, and Risen Star Stakes Presented by Lamarque Ford for trainer Steve Asmussen.

Baffert said he views the Malibu as a useful prep for the Feb. 25 $20 million Saudi Cup at King Abdulaziz Racecourse in Riyadh as opposed to a race that could crown the division champion.

“I think minds are made up on Epicenter [as the champion]. It’s too bad he got hurt. That was a shame,” Baffert said. “I’m just prepping Taiba for Saudi. If he runs well [in the Malibu], being that Mr. Zedan is from Saudi Arabia, I’ll probably take him there with Country Grammer [owned by Zedan, Commonwealth Thoroughbreds, and WinStar Farm]. If they do well there, we’ll run in Dubai and if not, we’ll head home.”

Baffert said Country Grammer, who has not raced since finishing second in the Oct. 1 Awesome Again Stakes, might use the Dec. 26 San Antonio Stakes at Santa Anita as a springboard to the Saudi Cup. Earlier this year, the 5-year-old son of Tonalist was second in the Saudi Cup off a nine-month break and then won the $12 million Dubai World Cup Sponsored by Emirates Airline a month later.

“Country Grammer is back in training,” Baffert said. “He could run at Santa Anita but he showed last year he can run fresh in a race like the Saudi Cup.”

As for the 3-year-old race, Kentucky Derby winner Rich Strike is also expected to race one more time before the year ends as trainer Eric Reed has targeted the Nov. 25 Clark Stakes Presented by Norton Healthcare at Churchill Downs for the 3-year-old son of Keen Ice. While the Clark would give Rich Strike a second Grade 1 win and a victory over older rivals, he owns a record of just one win, one second, and two thirds in his eight 2022 starts. Included in those starts, he has finished no better than fourth in three Grade 1 starts since his 80-1 shocker in the run for the roses.

Rich Strike was fourth in the Breeders’ Cup Classic, 2 1/2 lengths behind Taiba.

Gold Square’s Cyberknife, like Taiba, has a pair of Grade 1 wins in the Arkansas Derby and Haskell and was second by a head to Cody’s Wish  in the Big Ass Fans Breeders’ Cup Dirt Mile. The son of Gun Runner is expected to race one more time before heading to stud at Spendthrift Farm, with that start coming Jan. 28 in the $3 million Pegasus World Cup Invitational Stakes at Gulfstream Park, which takes place after the Eclipse Award winners are announced.

Trainer Brad Cox said Cyberknife would “probably not” run before the Pegasus.

Al Gold, who owns Cyberknife, said he views the Eclipse Award as a coin toss between Epicenter and Taiba with Cyberknife third.

“It’s close. Like Taiba, my horse has two Grade 1 wins, but I’d vote for Epicenter if I had a vote,” he said. “What’s meaningful are races like the Kentucky Derby and Travers, and Epicenter was second in the Derby and won the Travers. I don’t think a seven-furlong win [in the Malibu] should factor into the decision about a champion in this division.”