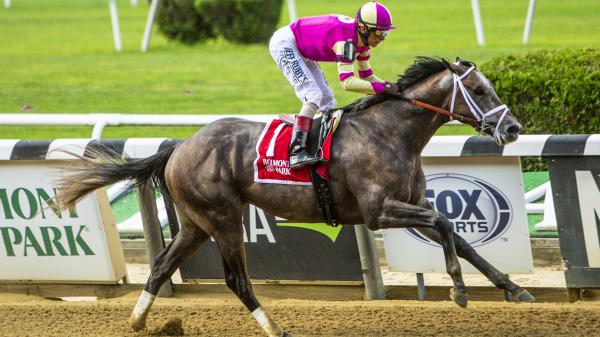 After losing one candidate for the Grade 1 Runhappy Travers Stakes, it did not take trainer Todd Pletcher long to find another.

Hours after it was announced Pletcher’s Grade 1 Belmont Stakes Presented by NYRA Bets winner Mo Donegal has been sidelined with bone bruising, Whisper Hill Farm’s homebred Charge It served up a reminder of the buzz he created early in the year as he romped to an epically lopsided victory in the $250,000 Grade 3 Dwyer Stakes for 3-year-olds July 2 at Belmont Park.

As second choice Nabokov was eased under the wire in the field of six, Charge It and jockey John Velazquez finished a whopping 23 lengths ahead of runner-up Runninsonofagun at the end of the one-turn mile.

“I’m not sure of what the official margin is,” Pletcher said shortly after the race. “At one point it kinda looked like it was the Secretariat pole (a marker commemorating Secretariat’s record 31-length win in the 1973 Belmont Stakes) and it was like “Whoa, that’s close.'”

Though Charge It could not match Secretariat, the gray son of Tapit surely served notice to the rest of the 3-year-old division in his initial stakes win that he’s as good as he was in his third career start when he finished second in the April 2 Grade 1 Curlin Florida Derby Presented by Hill ‘n’ Dale Farms at Xalapa —if not better.

“It’s what we were looking for,” Pletcher said. “A good performance that could put us in position to look at the Jim Dandy or Travers, or both of them. It was a powerful effort and we’re back on track as to where we were after the Florida Derby.”

The victory also allowed a line to be crossed through Charge It’s 17th-place finish in the Grade 1 Kentucky Derby Presented by Woodford Reserve when he was steadied and came away with an entrapped epiglottis that required a minor surgical procedure. Yet for Pletcher there were some thoughts of “What if?”

“His work 15 days before the Derby was as good as I’ve seen at (Churchill Downs),” Pletcher said, “so I knew we were inexperienced and we were giving up a lot that way to those horses (in the Kentucky Derby), I but didn’t think we were (giving up anything) from a talent standpoint.”

While the Aug. 27 Travers at Saratoga Race Course is on the radar, Pletcher was uncertain if Charge It would prep for it in the July 30 Grade 2 Jim Dandy Stakes at the Spa, another race that was a possibility for Mo Donegal before he was injured.

“I think it’s all about him telling us what to do,” Pletcher said. “Can we just train up to the Travers? That’s not impossible, either.”

Breaking from the rail under John Velazquez, Charge It showed the speed he displayed in his first two starts in the maiden ranks, sitting second behind pacesetting Fluid Situation through fractions of :22.47 and :44.92. Approaching the quarter pole, the 3-5 favorite ($3.20) came out and nudged Nabokov then surged past Fluid Situation from the outside. He drew off with consummate ease, leading by 10 lengths at the eighth pole and covering the mile in 1:34.67.

“If he puts everything together, this is going to be a dangerous horse,” Velazquez said.

The victory was the third of four on the card for Pletcher, who also won the Grade 2 John A. Nerud Stakes with Life Is Good and sent out an impressive debut winner in Capensis, a son of Tapit owned by Eclipse Thoroughbred Partners, Robert LaPenta, Gainesway Stable, Winchell Thoroughbreds, and Stonestreet Stables who was purchased for $2 million from the Eaton Sales consignment at the 2020 Keeneland September Yearling Sale. The 3-year-old Capensis, who was bred by Stonestreet, won the fifth race, a 1 1/16-mile maiden race on the inner turf, by five lengths in 1:39.94.

Charge It has won 2 of his 5 starts, with earnings of $367,900. He is the second of three foals and lone winner for the Indian Charlie mare I’ll Take Charge, a daughter of multiple grade 1 producer and $2.4 million earner Take Charge Lady, who also has an Into Mischief colt born earlier this year.