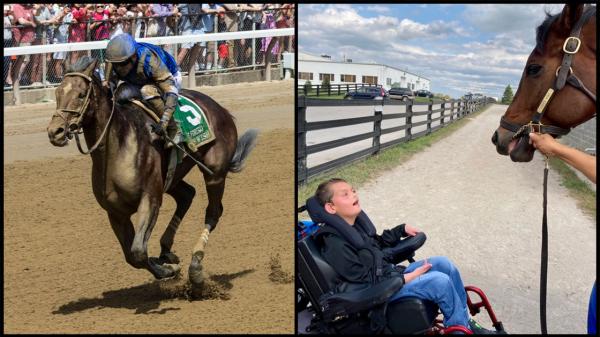 There cannot be a more inspiring story on the road to the 2022 Breeders’ Cup World Championships than the one involving Cody’s Wish and his namesake, Cody Dorman.

Life has been an uphill struggle for Dorman, 16, since he was born with Wolf-Hirschhorn syndrome, a rare genetic disorder affecting many body parts. He experiences frequent seizures. He is unable to walk or speak, relying on a tablet to communicate. His father, Kelly, estimates that his son has undergone between 40 and 50 operations, including open-heart surgery.

Perhaps nothing has helped Dorman as much as his interaction with Cody’s Wish since the 4-year-old Breeders’ Cup contender was a foal at Godolphin’s Gainsborough Farm in Versailles, Ky.

It all began when the courageous teenager and his family visited the farm as part of Keeneland Race Course’s association with the Make-A-Wish Foundation. Given that foals tend to be skittish about anything they have not seen before such as a wheelchair, farm manager Danny Mulvihill was concerned about which foal they might bring out to meet Dorman. He settled on an unnamed son of two-time Horse of the Year Curlin, a Godolphin homebred.

“He was a nice, quiet, laid-back foal,” Mulvihill recalled. “It was very important from my point of view to see if we could get a foal close to Cody, knowing he was in a wheelchair.”

The foal eyed the boy and the wheelchair and began to inch closer until he was able to sniff around him for a bit. Then he laid his head in his lap. Pure bliss. For that instant, all was right in Cody’s world.

“It was one of those magical moments,” said Mary Bourne, the office manager who later named the foal Cody’s Wish.

Said Mulvihill: “This is a foal who almost by intuition knew what we wanted him to do.”

It was the beginning of a connection so powerful that it defies explanation. “There is a higher power involved in this,” said Kelly. “It’s pretty special.”

Cody has maintained what his father describes as a “no-quit mentality” through most of his ordeals. He fell into a depression, though, after a series of setbacks. A blood vessel ruptured in his stomach, nearly sending him into shock in 2018. Then he endured the death of a grandfather who meant so much to him. And then there was the pandemic, limiting his activities even more than most.

Kelly contacted Gainsborough and asked if his son might visit Cody’s Wish. He was warned that the second time might not go as well as the first, for the foal had blossomed into a less-predictable 2-year-old bursting with energy.

The meeting was arranged nonetheless, amid fears that Cody might be terribly disappointed. But no. Cody’s Wish walked steadily to his namesake until his head touched his hand, signaling that the boy should pet him. Cody began stroking his nose.

“I could count on one hand the number of times I’ve heard him laugh out loud, just a big belly laugh,” Kelly said. “And he started doing it that day when they brought the horse out. It was incredible.”

The colt did not race at 2. When he finished third in each of his first three starts the next season, with all of those coming in New York, Cody told his mother, Leslie, that the horse would not win until he was able to travel from their Richmond, Ky., home to see the race.

They were treated like celebrities throughout. Jockeys made time to greet Cody. Remarkably, Cody’s Wish spotted him while he circled in the paddock. “He had his ears pricked up and his eyes fixed on Cody,” the father said.

They enjoyed a grand view from the winner’s circle as Cody’s Wish did exactly what Cody had predicted he would do, prevailing by two lengths in a triumph charged with emotion.

“It’s a fantastic story. It’s like Disney,” said Michael Banahan, director of bloodstock for Godolphin USA. “You wouldn’t make it up.”

Cody’s Wish was on his way. His maiden win began a stretch of six victories in his last seven starts. That includes the one-mile Westchester Stakes on May 7 at Belmont Park and, most recently, his first Grade 1 score in the seven-furlong Forego Stakes on Aug. 27 at Saratoga Race Course that boosted his lifetime earnings to $812,130.

The Forego, with Junior Alvarado aboard, represented a stunning upset of Jackie’s Warrior. The reigning sprint champion had gone undefeated through his first four starts this season. Jackie’s Warrior had never lost in five previous races at Saratoga, all of them stakes.

Cody had predicted victory in the Forego. The race unfolded perfectly with Jackie’s Warrior under intense pressure from Pipeline through the early stages. A furious rally by Cody’s Wish did the rest.

“When he starts moving, he keeps moving,” said Bill Mott, his Hall of Fame trainer. “He needed to get some experience and now he’s turned into a racehorse.”

Cody could not be more excited as he looks forward to attending the Breeders’ Cup at nearby Keeneland, where Cody’s Wish is expected to race in the Big Ass Fans Dirt Mile on Nov. 5. He has already asked his parents to buy him a blue pinstriped suit for the special occasion. It is not every day a young man who has met one challenge after another can cheer for a big-hearted horse that changed his life.