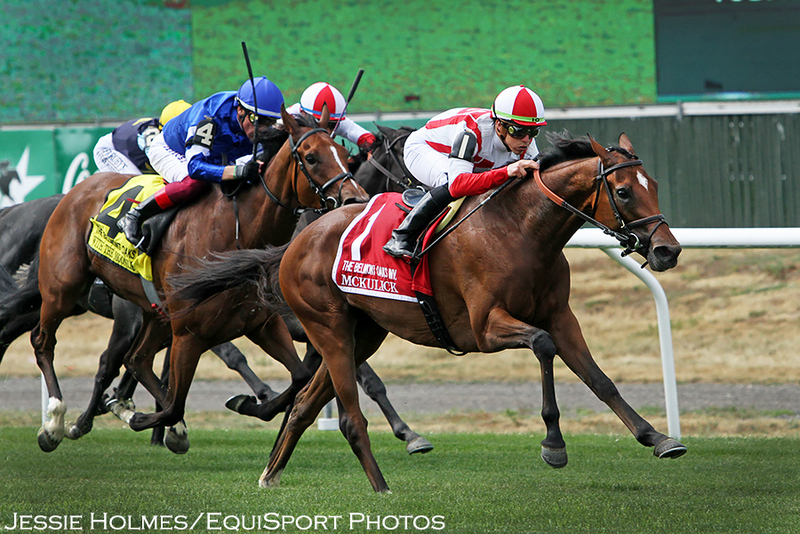 Klaravich Stables’ McKulick will strive for victory in two-thirds of the filly division of the Caesars Turf Triple when taking on five others in the third running of Saturday’s Grade 3, $700,000 Jockey Club Oaks Invitational for 3-year-old fillies traveling 11 furlongs over the inner turf at the Belmont at the Big A fall meet.

Trained by Chad Brown, McKulick captured the first leg of the Turf Triple in the Grade 1 Belmont Oaks Invitational on July 9 at Belmont Park en route to a runner-up finish in the second leg – the Grade 1 Saratoga Oaks Invitational on August 7. The daughter of Frankel has never finished out of the money in six lifetime starts, while boasting a 2-3-1 record and earnings of $713,650.

After finishing a late closing second against graded stakes company at Churchill Downs in her first two starts of the year, McKulick handled a stretch out in distance with flying colors in the 10-furlong Belmont Oaks. She tracked in fifth down the backstretch before launching a three-wide move around the far turn and collaring With The Moonlight in the final furlong to win by 1 3/4 lengths. McKulick came up short of victory by the same margin in the Saratoga Oaks, which was won by With The Moonlight.

McKulick demonstrated staying capabilities in her Belmont Oaks score, and Brown said the extra eighth of a mile should be within reach for his talented bay.

“She’s starting to give me that feeling that she might be able to do it,” said Brown, who trained last year’s winner Shantisara. “She ran into a really nice filly that turned the table on us after the Belmont Oaks. I thought she ran really well. We’ll try to complete the triple and run in all three legs. She’s been very consistent. I’m very proud of her.”

Irad Ortiz, Jr. will retain the mount from post 1.

Australian Bloodstock’s German-based Toskana Belle adds international flavor to the field, entering off a victory in the Group 1 German Oaks on August 7 at Dusseldorf for trainer Andreas Wohler.

The French-bred daughter of Italian Group 1 winner Shamalgan sprung a 16-1 upset when defeating a dozen other sophomore fillies in the German Oaks, run at the Jockey Club Oaks distance.

Internationally acclaimed rider Frankie Dettori is sure to give Toskana Belle his signature flying dismount should she win the Jockey Club Oaks, breaking from post 4.

Trainer Christophe Clement will send out Canisy following a troubled sixth in the restricted Riskaverse on August 25 at Saratoga. Owned by Marc Holliday’s Blue Devil Racing Stable, Canisy made her stakes debut in the one-mile Riskaverse, where she broke inward into a rival, skimmed the rail in fifth down the backstretch before making her bid in upper stretch, bumping with another rival at the sixteenths-pole and finished 2 1/4 lengths in arrears of upset winner Gina Romantica.

The lightly-raced Canisy began her campaign on a winning note over Belmont’s inner turf on May 1, running down next out winner Contemporary Art to win by a neck. She defeated winners in wire-to-wire fashion two starts later over the inner turf at Saratoga on July 14.

“She needs a bit of a smoother trip,” said Clement assistant Christophe Lorieul. “She’s a big filly and I don’t think you want to stop her too much and take back and go. She had to do that twice last time in the stretch. She needs something a bit smoother. The distance I don’t think will be a problem, she’s by Point of Entry and she can go on any ground.”

Hall of Famer Javier Castellano will retain the mount from post 3.

Michael Tabor’s Beside Herself enters off a triumph against elders, defeating graded stakes placed Rocky Sky by 3 1/4 lengths in a 12-furlong allowance optional claimer on August 25 at the Spa.

The daughter of Uncle Mo, trained by Hall of Famer Todd Pletcher, earned her two other trips to the winner’s circle in similar frontrunning fashion when breaking her maiden at third asking in January at Gulfstream and defeating winners in April at Keeneland. She earned graded stakes black type when third in the Grade 3 Regret on June 4 at Churchill Downs.

Flavien Prat, who piloted last year’s winner Shantisara and inaugural winner Edisa [2019], will seek to keep his perfect record in the Jockey Club Oaks afloat when guiding Beside Herself from post 6.

The daughter of Will Take Charge broke her maiden travelling 10 furlongs on April 30 at Churchill Downs before finishing a distant seventh in her stakes debut in the Grade 2 Black-Eyed Susan on May 20 at Pimlico Race Course. She rebounded in the next out Monomoy Girl on June 18 at Churchill Downs, finishing a close second.

Chris Landeros will ship up to ride Miss Yearwood, who breaks from post 5.

Completing the field is Godolphin’s Nostalgic, who will once again experiment with turf, entering off a distant sixth in the Grade 1 Alabama on August 20 over the Saratoga main track.

The Medaglia d’Oro filly made her sophomore debut in the Grade 3 Sweetest Chant in February over the Gulfstream Park turf, finishing a distant ninth in her lone start on grass for Hall of Famer Bill Mott. A next out allowance optional claiming winner on the Florida oval’s main track, she made the grade in the Grade 3 Gazelle on April 9 at Aqueduct.

Nostalgic has trained extensively over the Oklahoma training turf at Saratoga, recording an easy half-mile breeze in 50.92 on Monday.

The Jockey Club Oaks Invitational is carded as Race 7 on the Belmont at the Big A’s 11-race program, which also features the Grade 1, $1 million Caesars Jockey Club Derby Invitational for sophomores going 12 furlongs in Race 10. First post is 1 p.m. Eastern.

America’s Day at the Races will present live coverage and analysis of every day of Belmont at the Big A on the networks of FOX Sports. For the broadcast schedule and channel finder, visit https://www.nyra.com/aqueduct/racing/tv-schedule.

NYRA Bets is the official wagering platform of Belmont at the Big A, and the best way to bet every race of the fall meet. Available to horse players nationwide, the NYRA Bets app is available for download today on iOS and Android at www.NYRABets.com.