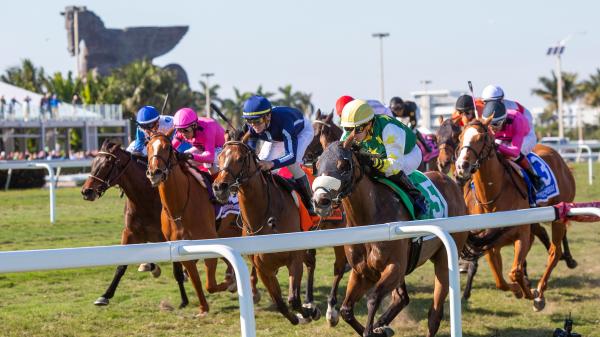 Many are accomplished stakes performers, such as recent Grade 3 Knickerbocker Stakes winner King Cause and recent Mohawk Stakes winner City Man, who has won three stakes from his last four races. Two-time Grade 1 Pegasus World Cup Turf Invitational Presented by Baccarat winner Colonel Liam adds more depth to the field but is returning off a nine-month layoff after a ninth-place effort in the Group 1 Dubai Turf Stakes. Shadow Sphinx finished second in the Artie Schiller Stakes in his most recent race and may be up to the task, as might Pao Alto, who finished third in that race. Winfromwithin, who won the Red Bank Stakes in September before finishing fifth in an allowance race and then taking a 2 ½-month break, is likely to try to go for the lead, as is rail sitter Street Ready, who is also returning off a two-month layoff. Carpenters Call won the Peach Street Stakes on an all-weather track last summer and has also won on turf, so he could be a factor as well. Tango Tango Tango shoed he belongs with these horses by finishing second in the Grade 2 Dinner Party Stakes this past May, but hasn’t won since earlier that same month, going winless in six starts. Kentucky Ghost won the Cliff Hanger Stakes in May and a stakes-quality classified allowance race in October, but he finished last of eight and was beaten by more than 20 lengths when last seen towards the end of November. Decorated Invader (the lone also-eligible), Marwad and Good Governance round out the field.

City Man has won as the favorite in his last two races, but he may not be favored in this year’s Ft. Lauderdale Stakes because those wins came in races restricted to horses bred in New York. He won the Ashley T. Cole Stakes at the 1 1/8-mile distance of the Ft. Lauderdale in September, posting a very strong 111 Equibase Speed Figure, and then followed that up with a 2 ½-length win in the Mohawk Stakes in October earning a fine 108 figure. Even though those two wins came in state-restricted races, City Man has proven capable of winning in open company, as he won the Danger’s Hour Stakes in April and the Forbidden Apple Stakes in July, earning a career-best 112 figure in the latter race. Best of all, jockey Joel Rosario rode him to two of those three wins and has now been in the saddle for six of this horse’s eight career wins. There should be a contested early pace scenario whereby both Street Ready and Winfromwithin duel for the lead, and if that develops, City Man looks quite capable of earning another stakes win in this year’s Ft. Lauderdale.

King Cause may be the rival City Man has to run down late to win because this hard-knocking horse has the style to sit third behind Street Ready and Winfromwithin in the early stages. He won the Knickerbocker Stakes in October when leading from start to finish, and that day he posted very slow fractions as no other horse wanted to be in front early. King Cause has won from off the pace as well. The gelding was so highly regarded after his Knickerbocker victory that he was entered in the FanDuel Breeders’ Cup Mile Presented by PDJF, but did not run and has been waiting for a race like this one since then. King Cause also won two races prior to the Knickerbocker, and he sat fourth in the early stages of that allowance race before proving best late, earning a career-best 109 figure in the process. That’s the race I’m expecting him to run under Jose Ortiz, who gets on after not having ridden the horse since January. He was aboard King Cause for a win at 1 1/8 miles in November 2021.

Colonel Liam is likely to go to post as the betting favorite in this race, because he’s won seven of 11 races and banked over $1.8 million. His biggest wins came in both the 2020 and 2021 Pegasus World Cup Turf Invitational over this turf course and at the same mile-and-an-eighth distance of the Ft. Lauderdale. Colonel Liam returns to the races not having run in nine months, which could be an issue except for the fact he won the Tropical Park Derby at the end of December in 2020 following a 4 ½-month layoff, and he also won the 2022 Pegasus following nearly eight months off. In that Pegasus almost a year ago, Colonel Liam earned a 113 figure, the same as he had earned in May of 2021 winning the Turf Classic Stakes. Those are solid figures, but then again, the 112 City Man earned in the Forbidden Apple Stakes last July and the 109 King Cause earned winning this past summer both suggest Colonel Liam is not a standout if these other two other horses run their best races.

Honorable mention goes to both Shadow Sphinx and Pao Alto, particularly as possible horses to fill out the exacta or trifecta. Shadow Sphinx and Pao Alto finished second and third, respectively, in the Artie Schiller Stakes last month and earned 109 and 107 figures with those efforts. Shadow Sphinx has won 11 of 32 career starts and banked nearly $400,000 on grass in his career. He’s trained by Mike Maker, who also saddles King Cause, so I feel we’d be remiss to ignore this one’s chances. Pao Alto is in the hands of top trainer Graham Motion and has only run three times in the U.S. since importing from his native France. He led late in the Baltimore-Washington Turf Cup in his U.S. debut in September before settling for second, and he ran similarly well in the Artie Schiller, so the gelding could be good for another in-the-money finish in the Ft. Lauderdale.