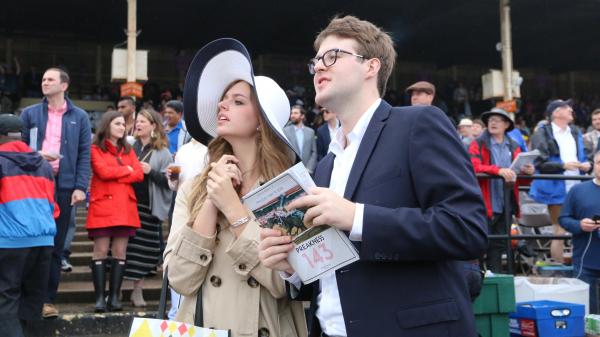 Eyeing an Upset in the Black-Eyed Susan Stakes

As is tradition, the Preakness eve card at Pimlico Race Course is headlined by the Grade 2, $250,000 George E. Mitchell Black-Eyed Susan Stakes. The race is named in tribute to George E. Mitchell, a longtime community leader in Baltimore who passed away in 2020.

This year’s renewal has attracted a field of 13 3-year-old fillies, many of whom have shown significant promise in their brief careers. The fillies will travel 1 1/8 miles in the 13th race of the day, with a scheduled post time of 5:44 p.m. ET.

This race is a prime example of where you have to separate the head from the heart as a bettor. As a racing fan, it would be a thrill to see #6 Luna Belle (9-2) take home the top prize. This Maryland-bred filly, campaigned by longtime Maryland trainer Hamilton Smith and ridden by top Charles Town jockey Denis Araujo, has won five consecutive stakes races at Pimlico’s sister track, Laurel Park. She’s won her last four starts by at least three lengths, making bold moves to the front each time and drawing away impressively. There would be nothing better than seeing her make the same dominant move and win the Black-Eyed Susan, from a fan’s perspective.

However, from a bettor’s perspective, she’s never faced a field nearly as tough as this one. Most of her previous starts were layups; she was the odds-on choice in her last four races. Now, many of her main rivals have speed figures as good or better than hers. Furthermore, she tends to come from off the pace with one big rush to the lead. Generally, Pimlico’s track is more speed-favoring than Laurel’s dirt track. She has a shot here, and I would definitely use her in a Pick 4 or Pick 5 wager, but I can’t say she’s the most likely winner or the best value.

I’ll take a shot with a horse who, in my mind, will be a better value. #5 Beguine (12-1) missed out on a spot in the Longines Kentucky Oaks by inches when she finished second in the Fantasy Stakes at Oaklawn Park last out. She rated off the pace and battled in the stretch with Yuugiri, but ultimately fell short by a neck. In the start prior, she broke her maiden in gate-to-wire fashion. I’m not sure if she’ll be able to get to the lead here, but she should rate off the pace and get an ideal trip racing in the two path. She’s getting better with every start and will be a great play if she is near her morning-line price when the starting gate opens.

#10 Adare Manor (5-2) is the only one in the field who has won a graded stakes race, and she did so in impressive fashion. She won the Las Virgenes Stakes at Santa Anita Park by 13 lengths in a sharp front-running effort. Next out, she finished second in the Santa Anita Oaks, showing great resilience in fighting back with Desert Dawn. That filly went on to finish third in the Kentucky Oaks. While she’s probably the most talented horse in the race, her post draw is not ideal. She’s very likely going to get caught wide most of the way, which can be problematic anywhere, and is especially so at Pimlico. As the most likely favorite, she’s not going to provide great value. She has to be considered a win candidate but I don’t know if I would bet her at her what figures to be a short price.

#7 Distinctlypossible (6-1) is very lightly raced but has flashed a lot of promise. She finished second in the Darley Alcibiades Stakes at Keeneland last October, then went to the sidelines until a maiden special weight race at the Lexington track on April 10. She rated off the pace and drew off to win impressively by 1 ¼ lengths. The second-place finisher in that race, Miss Yearwood, came back to win at Churchill Downs next out and is also entered in this race. Distinctlypossible should improve in her second start off the layoff for Chad Brown and will be tough if she does so.