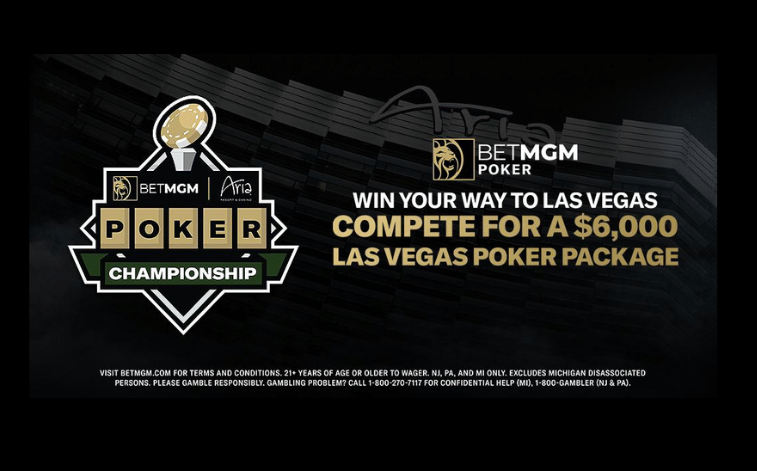 The BetMGM Poker Championship, which headlines the 2022 ARIA Poker Classic, will kick off four days of BetMGM live poker action at the luxurious Las Vegas casino.

“The first-ever BetMGM Poker Championship descends on Las Vegas during one of the most exciting times of the poker season,” Luke Staudenmaier, Director of Poker of BetMGM, said in a recent press release. “ARIA is a legendary poker brand and we’re thrilled that the Championship has become an integral part of this year’s Poker Classic. Through our relationship with MGM Resorts and its world-class U.S. properties, we’ll continue to leverage event programming and connect with players both online and in their favorite poker rooms.”

A Million Up for Grabs

The no-limit Hold’em BetMGM Poker Championship will feature a guaranteed prize pool of $1,000,000, and it could surpass that with so many poker players in town for the summer poker action.

PokerNews will be on-site to live report on the BetMGM Poker Championship, so be sure to check out the live reporting hub for tournament updates.

Next up will be the $600 buy-in BetMGM Poker Mystery Bounty event on June 25, which will mark the first time ARIA has run such an event. Mystery Bounty events are all the hype right now and add an additional sweat factor to the game, so expect this event to be an exciting one that draws a sizable field.

The inaugural ARIA Mystery Bounty tournament will take place just weeks ahead of the $1,000 buy-in Million Dollar Bounty No-Limit Hold’em event at the 2022 World Series of Poker (WSOP), which will include a mystery bounty of one million.

Other notable events that will take place during the ARIA Poker Classic, which is running June 1-July 17, include the $400 buy-in No-Limit Hold’em Ladies event, which kicks off on June 28 and has a $50,000 guarantee.

The 2022 ARIA Poker Classic will wrap up with a Player’s Choice freeroll on July 17, with the entrants being chosen via Twitter vote.

Ahead of the series, Bet MGM Poker is awarding prize packages to at least 15 players from each US market, which consists of BetMGM Poker Michigan, New Jersey and Pennsylvania. In addition to a buy-in into the BetMGM Poker Championship, these packages include travel expenses and a five-night stay at ARIA.

15 online poker players have already qualified for the BetMGM Poker Championship at @ARIAPoker!

Every Sunday leading up to the BetMGM Poker Championship, BetMGM Poker will host $500 qualifier events for a chance to win the $6,000 prize package.

Be sure to check out BetMGM Poker’s Twitter page at @BetMGMPoker for more information about the upcoming live events and ways to qualify.

A full schedule of the upcoming 2022 ARIA Poker Classic is available in the table below.