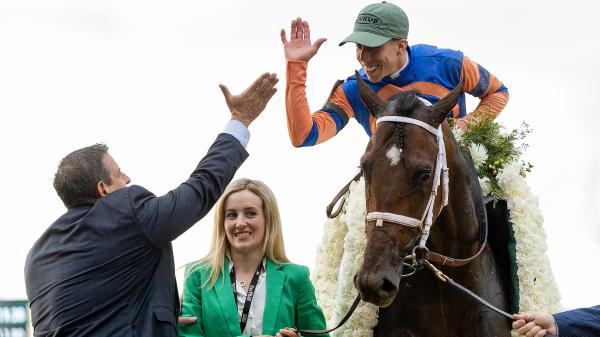 Tom Pedulla presents five key takeaways from the 154th Belmont Stakes Presented by NYRA Bets on Saturday and other major developments on a huge afternoon of racing at New York’s Belmont Park:

TIP OF THE CAP: While most attention immediately after the Belmont focused on New York native Mike Repole and his one-two finish with Mo Donegal and Nest, no one should lose sight of what the triumph meant to Donegal Racing. That partnership owns 75 percent of the Belmont winner and registered the first Triple Crown victory in a 13-year history that makes managing partner Jerry Crawford proud. Before this, Donegal had been best known for campaigning Keen Ice, who finished third to American Pharoah in the 2015 Belmont before pulling a stunning upset of the Triple Crown champion in the Travers Stakes. Donegal also had two third-place finishes in the Kentucky Derby. “I don’t know if there is a better feeling than when your horse is pulling away in the stretch,” Crawford said after the Belmont.

FABULOUS FILLIES: Who is the best 3-year-old filly in the land? Secret Oath solidly defeated Nest by two lengths in the prestigious Longines Kentucky Oaks at a mile and a quarter, but Nest really took it to the boys five weeks later with a memorable runner-up effort in the mile-and-a-half Belmont. It only adds to her Belmont performance that the hard-trying daughter of two-time Horse of the Year Curlin overcame a stumble out of the starting gate. She displayed her athleticism by quickly recovering. She was flying at the finish, displaying extraordinary stamina. “My filly made a good run,” jockey Jose Ortiz said. “I’m very proud of her.”

FLYING HIGH: Undefeated Flightline arguably produced the most eye-popping performance of Belmont Stakes Saturday when he easily dispatched Happy Saver by six lengths in the Hill ‘N’ Dale Metropolitan Handicap. Flightline handled his first cross-country ship, his belated 4-year-old debut, and early adversity in the Met Mile with aplomb. “He suffered from a slow start because of the one post. Then he got cut off a little bit going down the backside,” noted trainer John Sadler. “With a young horse who’s not that well-seasoned, he just overcame the adversity and proved himself best.” Co-owner Kosta Hronis said the Sept. 4 TVG Pacific Classic at Del Mar will likely be Flightline’s next start. Flightline has dominated his first four starts by a combined 43 ½ lengths.

SENSATIONAL SOPHOMORE: Jack Christopher must still prove himself at a distance, but there was no doubting him when he rolled by 10 lengths in the seven-furlong Woody Stephens Stakes Presented by Mohegan Sun. “This horse is an exceptional talent,” said Chad Brown. “This is my 15th year of training and I’ve never had a dirt horse with this much pure brilliance.” The chestnut son of Munnings, who has had trouble staying healthy, extended his perfection to four wins in as many starts. He earned his second Grade 1 triumph, both at Belmont Park. The first came in the Champagne Stakes last October. His next target: the July 23 TVG.com Haskell Invitational Stakes at New Jersey’s Monmouth Park.

DOWN AND UP: Hall of Fame trainer Steve Asmussen endured a significant disappointment when Echo Zulu, his champion 2-year-old filly last season, was scratched shortly before the start of the Acorn Stakes. Jockey Joel Rosario felt something might be amiss with her. Clairiere eased Asmussen’s pain when she produced the second Grade 1 victory of her career, in the Ogden Phipps Stakes. “This is the highs and lows of this sport, absolutely,” Asmussen said. “But who is better prepared to take it than someone who runs 46,000 horses? Always and never are two words that do not belong in this game.” An initial inspection of Echo Zulu did not reveal any issues.