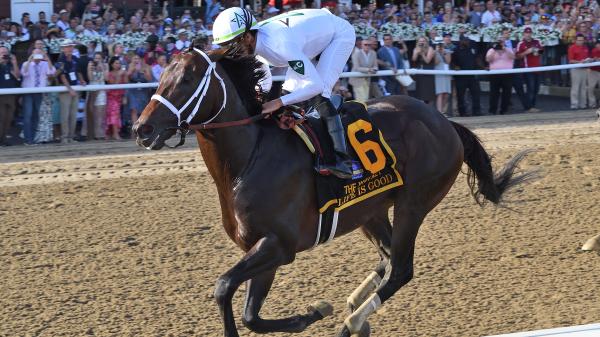 Five Takeaways You Need to Know from Whitney Stakes Day

Tom Pedulla presents five key takeaways from Saturday’s $1 million, Grade 1 Whitney Stakes at Saratoga Race Course, which provided the winner with a fees-paid berth in the $6 million Longines Breeders’ Cup Classic on Nov. 5 at Keeneland, and other major weekend developments:

MOVIN’ ON UP: Hall of Fame trainer Todd Pletcher equaled J. Elliott Burch for second place in all-time Whitney wins when Life Is Good repelled stablemate Happy Saver by two lengths to present him with his fourth triumph. Pletcher secured his previous victories in the prestigious Whitney with Left Bank (2002), Lawyer Ron (2007) and Cross Traffic (2013). John Gaver produced five Whitney victories from 1942 until 1958. “To me, it’s the premier older horse race in the country outside the Breeders’ Cup Classic, so it means a lot,” Pletcher said.

PUZZLING FINISH: The Whitney was expected to be a captivating duel between Life Is Good and Olympiad, who had swept all five starts of his 4-year-old campaign. That never materialized. Olympiad was never a factor in finishing a dull fourth on a track rated good following an afternoon rain shower. The son of champion sprinter Speightstown finished 9 ¼ lengths from the top. “He didn’t run at all. He didn’t run his race. Not even close,” said jockey Junior Alvarado, adding, “At the half-mile, I knew I was in trouble. He wasn’t traveling or picking it up like he normally does.”

INSTANT SUCCESS: Jockey William Buick, best known for his exploits overseas, was ecstatic after winning the $1 million, Grade 1 Caesars Saratoga Derby Invitational with Godolphin’s Nations Pride on behalf of trainer Charles Appleby. The triumph came with his first Saratoga mount. “I’m very privileged to be able to come over here and ride these horses,” Buick said. “I’ve been riding a lot in the states on and off the last few years and I love it. The jockey colony over here is something really special. To be in that jocks’ room (Saturday) with all the superstars was fantastic and great to be a part of it.”

SITTING CHILLY: Hall of Fame trainer Bill Mott pointed to jockey Joel Rosario’s heady ride in explaining War Like Goddess’ ability to use her customary late kick to repeat in the $250,000, Grade 2 Glens Falls Stakes. “You always worry about if they’re going fast enough up front to give her enough pace and you don’t want them to have to wrestle with her to keep her back off the pace,” Mott noted. “Joel did a good job. He has good hands and the filly responded to him and when he asked her to go on, she was there for him.” The $600,000, Grade 1 Flower Bowl Stakes on Sept. 3 is likely next for War Like Goddess, who finished third in the Maker’s Mark Breeders’ Cup Filly and Mare Turf last year at Del Mar.

LIVE AT FIVE: Five-year-old mare Blue Stripe was an also-ran in last year’s Longines Breeders’ Cup Distaff, finishing a well-beaten seventh. It may be very different this time around. She gained a fees-paid berth in this year’s $2 million, Grade 1 Longines Distaff when she won the $400,000, Grade 1 Clement L. Hirsch Stakes by 1 ¾ lengths against Desert Dawn Saturday evening at Del Mar. Favored Shedaresthedevil settled for third. Although Blue Stripe was a Group 1 winner in her homeland, this was her first Grade 1 triumph in the United States. She owns two wins and a second, all in graded stakes, since Marcelo Polanco began training her this season. She completed the 1 1/16-mile Hirsch in 1:42.97 with jockey Hector Berrios aboard for the first time. “I think she wants to run farther,” said Berrios, looking ahead to the 1 1/8-mile Distaff.