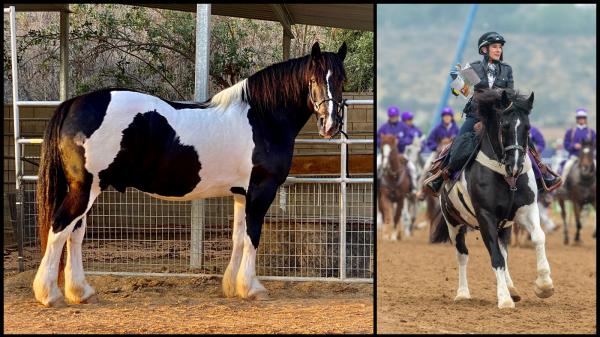 Moments after NBC reporter Donna Barton Brothers made her first report trackside at the 2021 Breeders’ Cup, her social media accounts sprang to life. “What is the name of that gorgeous horse you are riding today?” “I want to hear more about that gorgeous pony you are riding tonight?” “Love that big paint you were on for Breeders’ Cup!!” “What spotted horse did you ride today to interview the winner? The horse was gorgeous!” “Who is your beautiful mount?”

Beautiful? He looks like a movie horse. He is a large black and white paint with draft horse feathers on his legs. He floats across the track when he trots. He has a soft eye and a slim, crooked blaze. Big boned with big hips. With his ears perennially up, he swings his big head around and carefully observes everything around him. Calm. Steady and appears to be wise.

He is known as Kong and is a track pony owned by trainer Kristin Mulhall. She purchased him last April. “I buy a lot of riding and saddle horses through sales. I went to Montana and bought three. The sale had over five hundred head. If I see one I can pull and make a riding horse, I do. Or if I see one that will make a good pony, or a nice all-around riding horse. Then I buy it. I do a lot of sales with bomb proof horses.”

Now called Kong (in a reference to King Kong), she saw him in the sales catalog. “He was perfect. I jumped up on him and rode him all around the sales ground. He was just a perfect gentleman. He didn’t know how to eat cookies. He wasn’t spoiled. He was a cowboy’s horse.” He learned about cookies on the trailer ride home to California. Within 48 hours, he had his first spa day and learned about blankets.

He was a ranch and rodeo horse used as a pickup horse in bucking bull and bronco competitions. “When you see bronc riders jumping off the broncs, he was one of the horses you jumped onto.”  He has worked rodeos in both the U.S. and Canada. In addition, he’s carried the flag and done opening ceremonies. “He’s done everything as far as the rodeo world goes as a working horse. That was his whole life until I got him.”

Kong is 10 years old. His weight has varied between 1675 and 1800 pounds. She rode him all summer at Del Mar, and he has slimmed down. “It took me about a week to get him spoiled. Now he’s a big ham and loves everyone. Before, he would be snorting at you when you walked up. Now? He’s running up to you and checking your pockets. He is a big sweetheart. If you are on his back, it doesn’t matter where you are at or what you tell him to do. He does it. He is super easy and very comfortable to ride for a big horse.”

Mulhall did not have any breeding information about him, so she did a DNA test. It came back that he is part Percheron and part Spotted Draft cross.

He is now her main pony in the morning and takes her training horses without riders. “He can actually handle a good workload. If I thought horses would be scared of him because of his coloring. None of the horses have been scared of him. I can take the craziest horse and they just settle down next to him. They realize that they can’t bully him around. So, they are actually super easy to pony off him.”

She had to purchase a special saddle for him. “It looks small on him. I tried to put it on some of my Quarter Horses and it goes up over their butt. I had to get the stirrups shortened so my legs would fit it. I had a heck of a time with a cinch. He wears a 38-40 girth while the Quarter Horses wear a 28-30. I had to do some searching to find one.”

When Donna Brothers called her looking for a pony to ride for Breeders’ Cup, Mulhall sent her a video of Kong. “When Kristin first told me I’ve got a horse for you, my first impression was that he is a big, tall drink of water! His head is as big as my body! He is a little smaller than Harley (Churchill Downs’ well-known pony of size). I wasn’t sure that was going to work for me because I am little. But Kristin is my size.”

“He is clearly a gentle giant. He is so big. Because of where your feet hit on a normal horse, my spurs weren’t long enough to make contact easily. I had to ride him a little bit differently. With him, I would have to turn my foot out to get my spur to touch him at all. He didn’t need a lot of spur. The natural inclination for a lead pony like him is to move away from a horse on his offside. So, just a touch of spur and they think, ‘OK, you want me over there.’ ”

“I really did feel like a 6-year-old kid riding a Quarter Horse. My legs and my feet didn’t fall where they normally should. Luckily, he was such a gentle giant so that didn’t matter.”

“I wasn’t sure if he would be smooth, rough, or lazy. He didn’t strike me as a horse that would be really aggressive, which he wasn’t. He was quite smooth in a lope, and the trot. When I loped off him the first time, I was delighted that he had a smooth stride. He was really kind, too. He didn’t have to be in his mouth very much. He was never trying to take off. He was push-button.”

Photographer Zoe Metz calls Kong the “Harley of California.” Metz said, “I’ve even had the pleasure of riding Kong a few times. Not only is he stunning, but he’s also very classy. He is like sitting on the couch. He’s so wide! He is a gentle giant.”

From a world of bucking bulls and bucking broncos to a world of Thoroughbreds, Kong has made an easy transition. He was a ranch horse living in the field and didn’t know about cookies and blankets. Now this gentle giant has won the hearts of many with his first national appearance on TV. Based on his impact on social media, it’s not the last we shall see of Kong. The big horse has a big future on the track!