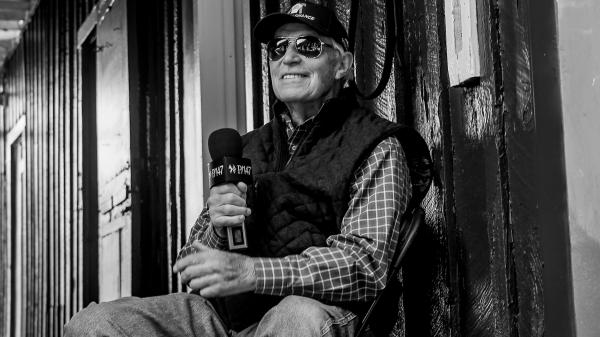 Lukas was one excited 86-year-old as he urged Mitchell and his wife, Stacy, to write a check for $600 to nominate the raw, but promising filly to the Triple Crown series. When Mitchell responded that he had no intention of tossing Secret Oath into a 20-horse Kentucky Derby field, Lukas told him he agreed with that thinking.

He had the Preakness in mind.

Mitchell paid for the early nomination and Secret Oath indeed blossomed into the star Lukas envisioned. She produced a decisive two-length victory in the May 6 Longines Kentucky Oaks and now bids to make history as the seventh filly to win the Preakness.

This is the kind of challenge that Lukas has embraced throughout his storied career.

“This is what motivates me, no question,” he said as he held court with reporters in a corner of the stakes barn. “I want to take these guys on, younger or older, good or bad. I enjoy the competition.”

After capturing the middle jewel of the Triple Crown for the first time with Codex in 1980, Lukas is aiming at a record-tying seventh Preakness triumph.

He is renowned for his willingness to think big, to take shots when others play it safe. “Not everybody trains fillies with this in mind. They might have a good filly, but they’re not thinking Preakness,” he said. “You’ve got to be a little aggressive in your thinking.”

Lukas reflected on his days as a high school basketball coach in his native Wisconsin.

“As a basketball coach, I pressed all the time,” he said. “I have an aggressive ‘A’ personality in a lot of ways. If I think it’s doable and I can pull it off, I’m going to do it.”

That bold approach helps to explain why three of his finest fillies registered major victories against males. Lady’s Secret asserted herself in the 1986 Whitney Handicap at Saratoga Race Course, Winning Colors in the 1988 Kentucky Derby, and Serena’s Song in the 1995 Haskell Invitational Handicap at New Jersey’s Monmouth Park.

Secret Oath will take on the boys for the second time. She was bothered at the break and endured a wide trip under Luis Contreras in the April 2 Arkansas Derby, leading Luis Saez to replace Contreras for the Oaks. Saez retains the mount for the Preakness.

Secret Oath is a daughter of the late Arrogate, who was honored as the Longines World’s Best Racehorse for 2016. She owns five victories in eight lifetime starts with a pair of third-place finishes and purse earnings of $1,295,417. The prestigious Oaks marked her fourth win in her last five starts.

Bred by Briland Farm in Lexington, Ky., Secret Oath will break from post-position four. Maryland Jockey Club oddsmaker Keith Feustle listed her at 9-2 on the morning line, making her the third choice behind Kentucky Derby Presented by Woodford Reserve runner-up Epicenter (6-5) and lightly-raced but speedy Early Voting (7-2), who finished second to Mo Donegal in the Wood Memorial Stakes Presented by Resorts World Casino.

According to Mitchell, the decision to enter the Preakness was not particularly difficult. “What’s at the heart of it is we’re going to be the second or third favorite,” he said. “Why aren’t we going to run if she’s sound and healthy? We’re not going to be 20-1.”

When fillies break through against males, it provides some of the sweetest moments in the rich history of the sport. For Hall of Fame trainer Steve Asmussen, Rachel Alexandra’s 2009 Preakness triumph “is separate from everything else.”

He doubts he will ever experience a similar atmosphere.

“I never felt that percentage of people rooting for one horse,” Asmussen said. “It was Rachel against everybody and everybody seemed to be on Rachel’s side. That was a wonderful, unique experience to be part of.”

Many in the racing industry are quietly rooting for Secret Oath to help Lukas add to his legend. “He’s one of the most respected trainers in the nation and the world,” said NBC analyst Britney Eurton. “He has such a keen insight into horses and what they need in training them as individuals. But he also loves to play the game. He loves to be a part of it. He’s had the most [Preakness] starters of anybody and he’s going after a record-tying victory in the Preakness. It seems like he just owns Preakness week.”

If Secret Oath delivers on the promise Lukas saw so long ago, do not look for him to make a grand exit. Life at the barn is all he knows.

2022-05-20
Previous Post: Benefits of the Expansion of Gambling in the US: Jobs & Economic Growth
Next Post: Michael Addamo Wins Second Title During Triton Series Madrid