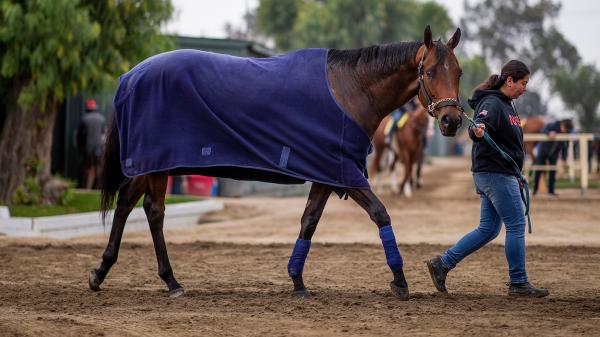 Is Messier or Forbidden Kingdom the Horse to Beat in Santa Anita Derby?

Over the last 10 years, the $750,000 Grade 1 Runhappy Santa Anita Derby at Santa Anita Park has churned out Grade 1 Kentucky Derby Presented by Woodford Reserve winners with impressive regularity. In recent years, I’ll Have Another (2012), California Chrome (2014), and Justify (2018) all won both races, while Authentic (2020) won the Kentucky Derby after finishing second in the Santa Anita Derby.

There’s a strong chance the 2022 Santa Anita Derby will bring forth yet another run for the roses champion. Saturday’s renewal of the 1 1/8-mile race has drawn only six starters, but the caliber of competition runs deep.

Speed is Forbidden Kingdom’s greatest weapon, and he routinely throws down intense pace fractions that would exhaust many horses. He’ll be formidable in the Santa Anita Derby, but might there be a chink in his armor? Forbidden Kingdom was decelerating significantly down the homestretch of the San Felipe, and the form of the race took a hit when runner-up Doppelganger returned to finish a distant fourth in the Grade 1 Arkansas Derby last week.

Even though Forbidden Kingdom won the San Felipe over 1 1/16 miles, it’s possible he’ll ultimately prove best as a sprinter-miler rather than a tried-and-true route runner. Stretching out over 1 1/8 miles in the Santa Anita Derby isn’t guaranteed to produce a victory, especially with #4 Messier in the field.

A stoutly bred son of 1 1/2-mile Grade 1 Belmont Stakes winner Empire Maker, Messier showed promising form at age 2. In addition to finishing second in the Grade 2 Los Alamitos Futurity on the Road to the Kentucky Derby, Messier defeated Forbidden Kingdom in the Grade 3 Bob Hope Stakes sprinting seven-eighths of a mile at Del Mar, rallying boldly from behind a hot pace to win by 3 1/2 lengths.

Messier elevated his game to a new level in his 2022 debut. In the 1 1/16-mile Grade 3 Robert B. Lewis Stakes at Santa Anita, Messier dashed to the lead, carved out a solid pace, and then pulled clear under a hand ride to win by 15 lengths. Interestingly, fifth-place finisher Happy Jack (beaten 27 1/4 lengths) returned to finish third in the San Felipe, only 10 1/2 lengths behind Forbidden Kingdom.

In terms of Brisnet Speed ratings, the 104 posted by Messier in the Robert B. Lewis tops Forbidden Kingdom’s 102 from the San Felipe. In short, the past performances suggest Messier is the horse to beat in the Santa Anita Derby, even though the blinding speed of Forbidden Kingdom is bound to be dangerous.

The wildcard in the Santa Anita Derby is Messier’s stablemate, #6 Taiba. Sold for $1.7 million as a 2-year-old, Taiba ran boldly in his debut sprinting six furlongs at Santa Anita last month, dueling for the lead before surging clear to win by 7 1/2 lengths with a 100 Brisnet Speed rating.

The only problem is, Taiba has never faced proven winners, and he’s never run farther than three-quarters of a mile. Can he challenge in the Santa Anita Derby while stepping up significantly in class and distance? It’s a tough task. Back in 2012, a horse named Paynter attempted to win the Santa Anita Derby off a single debut win sprinting. He could only manage a fourth-place finish, even though he eventually proved talented enough to win the Grade 1 Haskell Invitational Stakes and place second in the Belmont Stakes.

If Taiba falters in the Santa Anita Derby, #5 Win the Day can snatch a top-three finish. After finishing second and seventh in his first two starts on turf, Win the Day relished switching to dirt for a one-mile maiden special weight at Santa Anita last month, surging from off the pace to dominate by 5 1/2 lengths. The stretch-running gelding is progressing in the right direction and should enjoy the hot pace expected on Saturday.

So how should we bet the Santa Anita Derby? There isn’t much value in betting Messier to win, so we’ll instead key him on top of exacta and trifecta wagers. We’ll naturally use Forbidden Kingdom underneath, but we won’t rely entirely on him to finish second. Instead, we’ll use him alongside Win the Day, just in case a destructive pace allows Win the Day to outrun expectations and crash the exacta at double-digit odds.