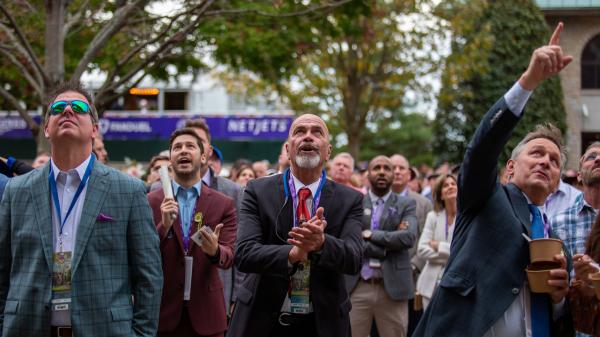 Last week’s Breeders’ Cup World Championships at Keeneland will go down as one of the most memorable in recent years, posting a record all-sources handle and featuring some fantastic performances topped by Flightline’s thorough domination of the Longines Classic – a fitting finale to a short but brilliant career that puts him alongside (arguably even ahead of) horses like Ghostzapper and American Pharoah as the best racehorses of this century so far.

As we all know, there’s no real pause in the horse racing calendar, so the focus now turns on a dime to early action on the 2023 Kentucky Derby Presented by Woodford Reserve trail. We’re already almost eight weeks into the Derby prep race series compiled by Churchill Downs, and last Friday’s FanDuel Breeders’ Cup Juvenile Presented by Thoroughbred Aftercare Alliance upped the ante for Derby prospects by distributing a total of 60 qualifying points to the top five finishers.

One of the most fun activities during the prep season involves laying down some cash on a futures pick for the 149th Derby, which will be run under Churchill Downs’ Twin Spires on May 6, 2023. Starting now, and lasting through April, America’s Best Racing will bring you up to date with the changing odds and notable entries for potential Derby horses at Caesars Sportsbook.

We’ll revisit these odds when new sheets are released (usually after a major prep race is completed). With each passing prep race, the number of viable Derby contenders will shrink, but as of now, there are literally hundreds of horses out there that carry the dreams of owners and gamblers alike to find the Churchill Downs winner’s circle somewhere on the first Saturday in May – and some of them may have not even raced yet.

Aside from the Las Vegas books, the first of six Kentucky Derby Future Wager pools offered by Churchill Downs Inc. has already closed on Nov. 3. The “all other colts and geldings” option led the first pool at 4-5 odds, while among the 38 individual horses offered, Extra Anejo led at odds of 12-1.

The second pool runs from Nov. 24-27 corresponding with the closing weekend of the track’s fall meet. That weekend is highlighted by the Kentucky Jockey Club Stakes on Nov. 26, a qualifying points race for Derby 149.

Forte and Cave Rock: The 1-2 finishers in the FanDuel Juvenile Presented by TAA both ran well at Keeneland. Cave Rock set a solid early pace, drew clear in early stretch, and came in a clear second ahead of stablemate National Treasure (30-1 on William Hill’s book) while tiring a bit late and lugging in. Forte, meanwhile, got a perfect trip and ride from Irad Ortiz Jr., moving into contention midway through the far turn and then rallying through the center of the stretch to win by 1 ½ lengths and earn 30 qualifying points for the 2023 Kentucky Derby. Forte is the most advanced racehorse in his age group so far and he reaffirmed that by winning the Juvenile, which followed Grade 1 scores in the Hopeful Stakes and the Claiborne Breeders’ Futurity, the latter held on the same track and at the same 1 1/16-mile distance as the Juvenile (read more about him in this Derby contender profile from Mike Curry). Cave Rock also entered off of two consecutive Grade 1 wins – the Runhappy Del Mar Futurity followed by the American Pharoah Stakes – but those came against lesser competition on the California circuit, National Treasure excepted. More often than not, multiple Grade 1-winning 2-year-olds are usually past their prime by the time the marquee Kentucky Derby preps roll around in late March and into April, but these two colts look like they could stick around awhile.

Todd Pletcher, Forte’s trainer, told Daily Racing Form that the Violence colt would get a 30-day break in Florida before resuming training for next year’s Derby prep season. If all goes as planned he would race two more times prior to the Derby, either in Florida or Kentucky. As for Cave Rock, he should resurface in one of California’s Derby preps January or February. Trainer Bob Baffert’s suspension by Churchill Downs extends through the 2023 Kentucky Derby, which means that Cave Rock hasn’t earned any qualifying points from his win in the American Pharoah and runner-up finish in the Juvenile. If the son of Arrogate maintains his status as a top Derby contender, he’ll have to switch trainers sometime in early 2023 before the prep season is over (à la Messier and Taiba last spring) in order to qualify for the big race.

Arabian Knight: Less than 24 hours had passed after the BC Juvenile when another Baffert trainee turned heads at Keeneland. This Uncle Mo colt, who was purchased by owner Amr Zedan for $2.3 million last April, romped by 7 ¼ lengths in the first race on Breeders’ Cup Saturday, a seven-furlong maiden special weight. Sent off at 0.76-1 odds in his career debut, he jumped to the early lead, took mild pressure heading into the far turn, and settled matters by the quarter pole en route to a visually impressive win. Arabian Knight earned a 102 Equibase Speed Figure in the victory, comparable with Forte’s (107) and Cave Rock’s (104) numbers in the Juvenile, and opened on William Hill’s Nov. 6 sheet at 10-1 odds, lower than that pair. As impressive as his debut win was, this colt is a gigantic underlay as a potential Kentucky Derby winner more than 5 ½ months out from May 6. Uncle Mo has already sired a Kentucky Derby winner and is undoubtedly one of the most productive young sires currently standing, but Arabian Knight’s pedigree on his dam’s (mother’s) side is unexciting from a stamina standpoint: he’s out of an Astrology mare whose most accomplished close relatives are all sprinters-milers.

Extra Anejo: This son of top sire Into Mischief was arguably the most impressive 2-year-old winner during Keeneland’s regular October meet, and as such he’s getting 20-1 odds from Caesars/William Hill. He took a maiden special weight held at Keeneland’s “beard” distance (about seven furlongs) in gate-to-wire fashion Oct. 13, coasting to a 9 ½-length victory under Tyler Gaffalione and earning a 95 Equibase Speed Figure. Extra Anejo was purchased for $1.35 million as a yearling by owner Winchell Thoroughbreds, and he’s trained by Hall of Famer Steve Asmussen. Winchell and Asmussen campaigned Epicenter, the probable champion 3-year-old male of 2022 who was injured in last week’s Longines Breeders’ Cup Classic and is now recovering for what will hopefully be a successful stud career. This owner-trainer combo always produces one or two 3-year-olds that make noise on the Triple Crown trail, and Extra Anejo certainly fits the bill. Asmussen told Daily Racing Form’s Marty McGee that his second career start could come in an allowance race on Churchill Downs’ Stars of Tomorrow card Nov. 26. Extra Anejo’s pedigree actually has a predominantly European influence on the dam’s (mother’s) side, but it’s packed with stamina. His dam won at 1 ¼ miles and is a half-sister (same dam [mother], different sire [father]) to a mare who won two stakes races at 1 ½ miles in England. Furthermore, Extra Anejo’s second dam (maternal grandmother) is a half-sister to U.S. champion turf female Islington, a long-distance specialist who won the 2003 Breeders’ Cup Filly and Mare Turf and finished third in that race in 2002. Islington also took down three Group 1 stakes in England.

Giant Mischief and Arabian Lion: These two well-bred colts finished 1-2 in a seven-furlong allowance-optional claiming race on the Breeders’ Cup’s Future Stars Friday undercard at Keeneland Nov. 4. Arabian Lion, another Zedan/Baffert runner, was the 0.71-1 favorite coming in off of a three-length score sprinting at Santa Anita Park. Giant Mischief, trained by Brad Cox for a large ownership syndicate, shipped in under the radar somewhat from Horseshoe Indianapolis, where he took a 5 ½-furlong maiden race by 1 ½ lengths. The 6-1 shot rallied from a stalking position to outfinish pace-pressing Arabian Lion by three-quarters of a length, bettering his rival by one point with a 101 Equibase Speed Figure. As for pedigrees, Giant Mischief is another son of Into Mischief and is out of the Giant Oak mare Vertical Oak, who earned $773,095 as a multiple graded stakes-winning sprinter; this colt’s damsire (maternal grandfather) Giant Oak, on the other hand, was a two-turn grinder who won a pair of Grade 1 stakes at 1 1/8 miles. Arabian Lion’s bloodlines for distance are a stretch better: he’s from an accomplished family anchored by third dam (maternal great-grandmother) Personal Ensign, the unbeaten 1980s Hall of Famer who closed out her career with a win in the 1988 Breeders’ Cup Distaff. Arabian Lion is currently offered at 25-1 odds by Caesars/William Hill, while Giant Mischief is getting 60-1.

Rudder’s Men: Among the longer-priced horses on William Hill’s latest sheet, this Florida-bred colt is worth a look at 125-1 odds. He won his first career start by a geared-down 4 ¼ lengths at the Belmont at the Big A meet in New York Oct. 22, coasting home in a seven-furlong maiden race under Irad Ortiz Jr. at odds of 0.55-1. Rudder’s Men is a homebred by Vincent Viola’s St. Elias Stable, which co-owns Forte, and he’s trained by Pletcher. His pedigree is sneaky-good, albeit a bit wanting in terms of proven stamina. Sire Battalion Runner, a son of the late, leading sire Unbridled’s Song, emerged as a Kentucky Derby contender with two sharp wins at Gulfstream Park during winter 2016-’17 but finished second as the favorite in that spring’s Wood Memorial Stakes Presented by NYRA Bets and only raced twice after that before retiring. Rudder’s Men’s dam, by Speightstown, did not win in three starts and is a half-sister to swift Grade 1-winning sprinter Yaupon, perhaps best remembered for being bitten by Firenze Fire in the stretch but recovering to take the Forego Stakes in 2021.