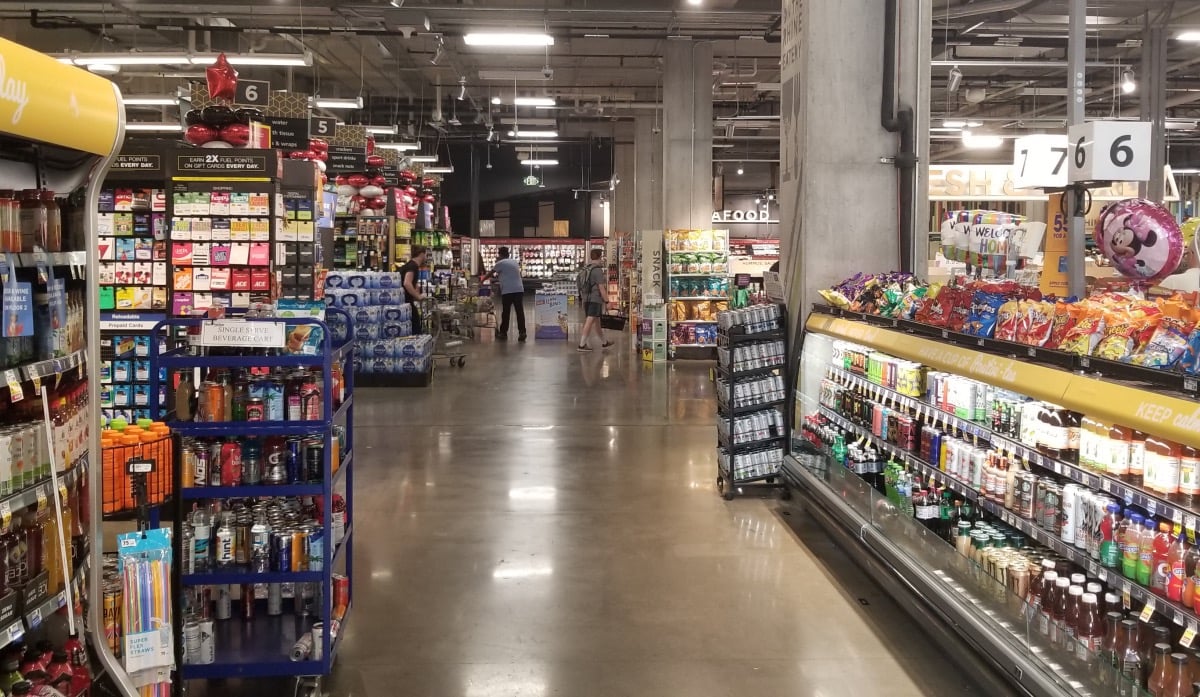 It’s just before 6 pm on an early August evening in Ohio, and the Kroger in Anderson Township just outside Cincinnati looks like your typical supermarket at that time of the day.

Shoppers mill about a Kroger supermarket in Downtown Cincinnati. According to the Ohio Lottery, 42 Kroger locations in the state have been prequalified to host sports betting kiosks. (Image: Casino.org)

Couples and singles walk down the aisle picking up items for dinner. Parents and their kids stop to grab some water on their way to practice. Then, all of a sudden, the sound of an acoustic guitar could be heard throughout the store.

It’s not elevator music. It’s a live musician who just so happens to be playing in Kroger’s bar.

Yes, a supermarket with a bar. This Kroger pretty much has anything you could imagine, and in less than five months, that could include sports betting.

That Kroger store and 41 others in the state owned by the Cincinnati-based grocery giant are among the 1,109 lottery retailers that have been prequalified by the Ohio Lottery Commission (OLC) to host sports betting kiosks.

A Kroger representative did not return messages seeking comment.

Compared to how sports betting has rolled out in other states, grocery stores aren’t the only unusual applicants that have come forward in Ohio for sports betting licenses.

The SPIRE Institute, a large sports complex in Northeastern Ohio that also offers a boarding academy for high school-aged students, has applied to be a proprietor for an online sports betting app and a brick-and-mortar sportsbook. Phantom Fireworks also has submitted an application to partner with a retail sportsbook to be based in the Covelli Centre, a multipurpose arena in Youngstown.

According to one industry official, those may not be the only grocery chains in the state with locations that apply for sports betting licenses.

Kroger is not a member of the Ohio Grocers Association (OGA), but Kristin Mullins, the group’s president, told Casino.org Tuesday that the organization anticipates other larger supermarket chains may apply for licenses, too.

“I think we’ve got some caution on behalf of some of the members because we’re still waiting on the details of how everything is going to work,” Mullins said.

In addition to allowing online sports betting and in-person sportsbooks, biosks were part of the sports betting bill Ohio lawmakers passed and Gov. Mike DeWine signed into law last December as part of an effort to allow more businesses to participate. The law permits lottery retailers holding certain by-the-drink liquor licenses to have either self-serve or clerk-operated kiosks.

While more than 1,100 have been prequalified by the lottery, those vendors and others interested in getting a license will still need to be approved by the Ohio Casino Control Commission (OCCC). Through Tuesday evening, 350 have officially applied to the OCCC.

Prequalification by the lottery does not guarantee approval by the OCCC. Besides being a lottery retailer with either a D-1, D-2, or D-5 liquor license, the applicant must also be a for-profit business. Those that submit their applications by next Monday will be in line to start taking bets on the state’s universal start date of Jan. 1 if the state approves their application.

Retailers approved will be able to work with a licensed kiosk proprietor. So far, the OCCC has received applications from seven such businesses.

OCCC Executive Director Matt Schuler said at a meeting of the Casino Control Commission last week that as many as 2,000 retailers may apply for kiosks.

Cashing In By Cashing Out?

Last year, as Ohio state senators worked on the bill that ultimately passed the legislature, several business groups came before a special committee and urged them to let such businesses as grocery stores and bowling alleys offer kiosks.

“We, of course, were hoping that all retailers can have a small piece of the pie, but that just wasn’t in the cards… it’s not ideal for my smaller members,” Mullins said. “But it is what it is, and I’m happy that some of my members could partake if they so choose.”

There may be other ways, though, for grocers to be involved in sports betting.

She said it would being able to cash sports wagers would be beneficial to smaller grocery stores.

It not only adds convenience to the consumers, but it puts people physically in our stores,” Mullins told Casino.org. “So. while they’re there, they’re going to pick up their milk and their chips and their pop and whatever else they need. That’s really what we’re looking for. We’re looking for that traffic. We’re a volume-based industry. We need people on our stores. We work on a very small profit margin, 1-to-2%. So, it’s all about volume.”

A message to the Ohio Lottery was not immediately returned on Tuesday.