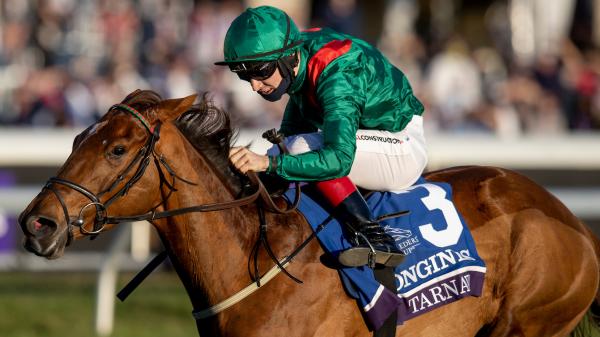 Led by star stablemates Knicks Go and Essential Quality in the $6 million Longines Breeders’ Cup Classic, a total of 196 horses – including a record 56 from overseas – have been pre-entered for the 2021 Breeders’ Cup World Championships Nov. 5-6 at Del Mar.

The 38th Breeders’ Cup will offer 14 races with purses and awards totaling more than $31 million. On “Future Stars Friday,” there will be five World Championships races exclusively for 2-year-olds. There will be nine Breeders’ Cup races on the Saturday program.

The number of horses pre-entered this year, 196, is comparable with the 201 pre-entered in last year’s event at Keeneland. The number is up from 187 pre-entered for the 2017 event, which also was contested at Del Mar. That marked the first year Del Mar hosted Breeders’ Cup and this year will be the second time the Southern California track hosts the event.

“We are very proud of the magnificent array of talent of group and graded stakes winners from around the world who have been pre-entered for this year’s World Championships,” said Breeders’ Cup president and CEO Drew Fleming. “International competition at its highest level is the hallmark of the Breeders’ Cup, and we thank the horsemen and women who prepare these outstanding equine athletes for the biggest races in their careers for their participation.

“We also thank our breeders and nominators, whose support of our $31 million in purses and awards is a true testament to their commitment to the Championships.”

“It would be an amazing achievement,” trainer Brad Cox said, if Knicks Go could follow with a win in the Classic after his dominating Dirt Mile win in 2020. “It would definitely go down as one of the better accomplishments since the inception of the Breeders’ Cup.”

In the Classic Cox also will send out Godolphin homebred Essential Quality, who won last year’s TVG Breeders’ Cup Juvenile Presented by Thoroughbred Aftercare Alliance and this year added a classic score in the Belmont Stakes Presented by NYRA Bets.

The Aga Khan’s Tarnawa will try to defend her 2020 victory in the 1 1/2-mile Longines Breeders’ Cup Turf as trainer Dermot Weld has made that race first preference for the 5-year-old daughter of Shamardal. Tarnawa, who finished second against males in the Qatar Prix de l’Arc de Triomphe Oct. 3 at Longchamp, also is pre-entered in the 1 3/8-mile Maker’s Mark Breeders’ Cup Filly and  Mare Turf.

Weld said Oct. 27 that Tarnawa has put together another top season and will be retired at year’s end. He said since he had the option to pre-enter both races he took advantage of the opportunity but thought the Turf would be the better fit.

The most popular race on the card is the FanDuel Mile, which saw 24 horses entered. The field is limited to 14 starters.

The field with the fewest pre-entries is the Breeders’ Cup Filly and Mare Sprint, where just seven horses are entered topped by Gamine, who will try to defend her 2020 victory in this race. The champion daughter of Into Mischief has won her four starts this year, all graded stakes, including the Ketel One Ballerina Handicap Aug. 28 at Saratoga Race Course.