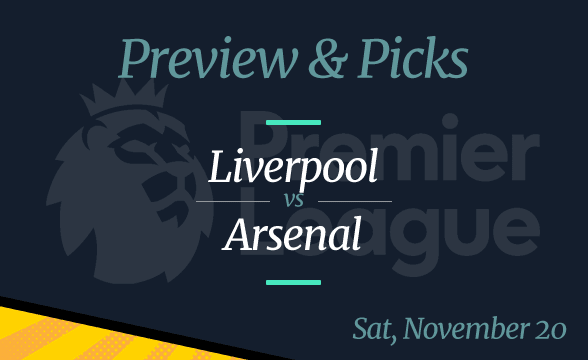 From April 6 to November 7, Liverpool was without a single defeat. Then, West Ham put an end to their superb streak, beating the Reds 3-2. They now want to bounce back with a win against surging Arsenal. It’s not going to be easy, but Liverpool will have one major advantage – they’ll play in front of their fans.

Anfield is the place where this team hasn’t lost a single game since the fans have been allowed back in. It’s needless to say that most of the games the Reds played on their turf, they won. According to betting odds, it’s very likely they will add another win to the list.

All odds are per FanDuel as of November 19.

Liverpool Wants to Rebound After an Unlucky Loss

Liverpool might be the most impressive soccer team this season, not only in England, but the entire world. Since August when their 2021-22 campaign started, the Reds have won 12 games in all competitions, while drawing four and losing just one.

The game they lost, they really should’ve won. Or, at least, they could’ve grabbed a draw. The game in question is the 3-2 loss to West Ham in London, which saw the visitors playing top soccer despite missing several of their first-team players.

The Reds had the ball in their possession for 69% of the time. They also had 16 goal attempts, which is nine more than what West Ham player created. Plus, one of the goals Liverpool conceded was an own goal by their goalkeeper Alisson.

Knowing all this, one must realize that two losses in a row probably aren’t going to happen to Liverpool. But, can they win against Arsenal? It’s not going to be easy, considering that the Gunners have been in fantastic form.

The win over Watford in Week 10 was Arsenal’s 54th win with Mikel Arteta as the manager. It was also Arsenal’s fourth straight win in all competitions, as well as the tenth game in which the Gunners didn’t lose.

It sure sounds impressive, but there’s a caveat – Arsenal didn’t play against teams as strong as Liverpool in those ten games.

In fact, the Gunners’ schedule at the beginning of the 2021-22 season has been pretty lightweight. The only heavyweights they’ve played against so far are Chelsea and Manchester City. They lost to both of those teams.

The Reds are coming off a loss in the previous round, not to mention that they still have some serious problems with injuries. Still, this doesn’t mean they aren’t going to be able to beat Arsenal. It only means that the odds on Liverpool are going to be better than usual.