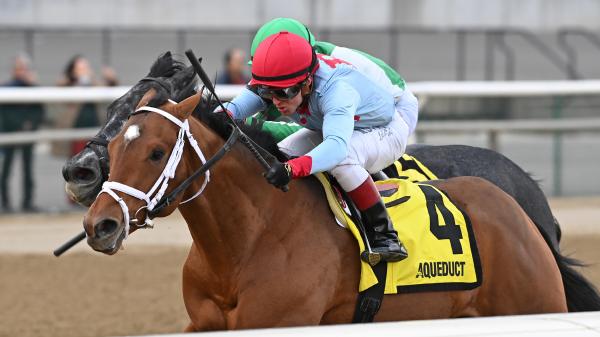 Michael McCarthy has trained a champion in the female sprinter Ce Ce, and Grade 1 and Breeders’ Cup winners such as City of Light, Smooth Like Strait, and Queen Goddess. He was even the trainer of record for Rags to Riches in one of her Grade 1 wins.

So, when the former Todd Pletcher assistant finally posted a maiden win in New York after a little more than 1,700 starts across the country with 276 wins, it was surprising, surely more surprising than the 3-year-old who notched that initial win, as BG Stables’ homebred Lugan Knight posted a hard-fought half-length victory as the 7-2 third choice in the $150,000 Jerome Stakes for 3-year-olds Jan. 7 at Aqueduct Racetrack.

“I got City of Light beat at Saratoga. Ce Ce got beat up there a few times. The Lieutenant was second in the Suburban,” said McCarthy, who was 0-for-14 at New York Racing Association tracks before Saturday. “It’s nice to take a horse back that way and win.”

While the Jerome raised the curtain on the series of four Road to the Kentucky Derby Presented by Woodford Reserve prep races at Aqueduct, there’s a much bigger gap than four months between the Jerome and the opening leg of the Triple Crown. Winning at a one-turn mile in Ozone Park on the first Saturday in January is a far cry from handling 1 1/4 miles on the first Saturday in May in Louisville. Yet Lugan Knight displayed the kind of tenacity Saturday that bodes well for a highly productive career.

After runner-up Arctic Arrogance drew alongside the front-running homebred son of Goldencents in the opening quarter-mile, Lugan Knight dug in for jockey Dylan Davis and never let the 6-5 choice move past, eventually edging away late.

“He always acted like a horse who had a nice constitution to him, so it was great to see him get in a dogfight and repel the other charge. It was a great ride by Dylan who took charge of the situation early and that made a big difference,” said McCarthy, who also noted the seven-length margin back to General Banker in third. “It was obviously a very good performance by the winner and the runner-up.”

As the winner of a qualifying race for the Kentucky Derby, Lugan Knight picked up 10 points and Arctic Arrogance, the runner-up in last year’s Grade 2 Remsen Stakes at the Big A, netted 4 to give him 8 total. General Banker was awarded 3, followed by Neural Network (fourth) with 2 and Andiamo a Firenze (fifth) 1.

The New York Road to the Kentucky Derby continues Feb. 4 with the Grade 3 Withers Stakes at 1 1/8 miles but McCarthy said his early inclination is to wait for the March 4 Grade 3 Gotham Stakes, which is at the same one-turn mile as the Jerome.

Trainer Linda Rice said she will point to the Withers with Chester and Mary Broman’s Arctic Arrogance, returning the homebred son of Frosted   to the same distance and track that produced the second in the Remsen.

“He didn’t go past but it might have a little to do with his weight. I missed a work with him and he’s pretty heavy,” Rice said about the New York-bred 3-year-old. “But he shows up each time and he’s taking steps forward. We certainly can’t be disappointed in any of his efforts. “

Lugan Knight and Davis led early fractions of :23.41 and :47.70 with Arctic Arrogance and Jose Lezcano hounding him from the outside, a half-length behind. The margin was down to a head at the eighth pole before the Kentucky-bred edged away late to cover the mile in 1:37.77 and pay $9.10 to win.

The victory was the second in four starts for Lugan Knight, who was bred in Kentucky. He was third in a Churchill Downs allowance optional claimer behind Victory Formation, winner of the Smarty Jones Stakes in his subsequent start.