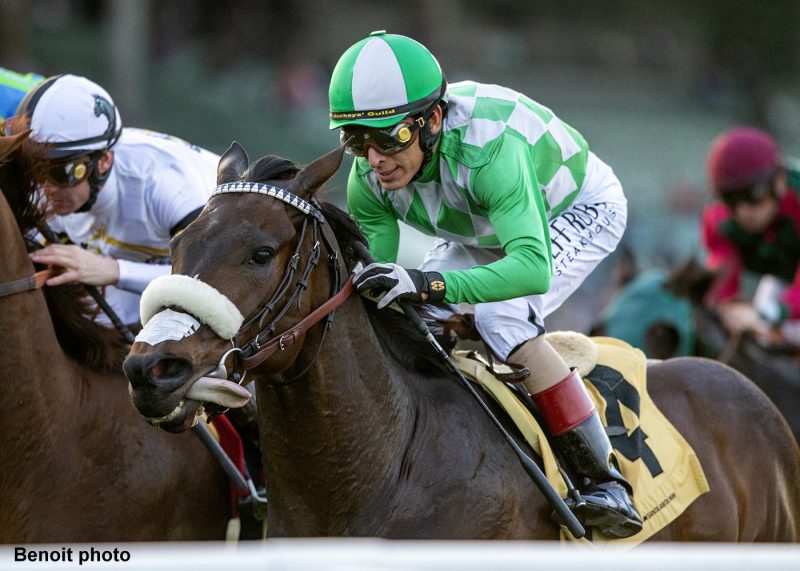 In the final race of the day on California Cup Day Saturday at Santa Anita, one of the state’s longest and most successful Thoroughbred owner/breeders, John Harris, witnessed his homebred Coalinga Road rally to take the $200,000 Unusual Heat Turf Classic by neck under Hall of Famer John Velazquez.

The Unusual Heat Turf Classic is part of the lucrative CTBA-sponsored Golden State Series for eligible California-bred or -sired horses.

Content to stalk the early leaders into the first turn, Coalinga Road was fourth, about two off Kings River Knight with three-quarters of a mile to run.

Leaving the three furlong pole, Velazquez was on the move three-deep, gradually overtook Kings River Knight inside the sixteenths pole, and prevailed over the onrushing Aligato and Luvluv.

Bred and owned by Harris Farms Inc., Coalinga Road, who had raced on dirt in his last two starts, most recently on Nov. 19 at Del Mar when third to the multiple stakes-winning The Chosen Vron in the state-bred Cary Grant Stakes at seven furlongs, was off at 3-1 in a field of eight older horses and paid $8.60 for Saturday’s winning effort.

By Quality Road out of the Johannesburg mare Coco Ecolo, Coalinga Road, in notching his first stakes win, improved his overall race record to 4-6-3 from 18 starts. With the winner’s share of $110,000, he increased his career earnings to $260,600.

Fifth at the rail early and tucked in just to the inside of the winner heading up the backside, Aligato stalked the leaders around the far turn, awaited room while two from the rail at the top of the lane, and finished well to just miss under Flavien Prat.

Off at 5-2, Aligato, who found his best stride late, finished a neck in front of Luvluv.

Last to the far turn, Luvluv, the longest shot in the field at 30-1 with Joe Bravo, flew late to be third, finishing a half length in front of early leader Kings River Knight.

Carmelita’s Man, the 2-1 favorite with Juan Hernandez, had no apparent excuses and finished seventh.

JOHN VELAZQUEZ, COALINGA ROAD, WINNER: “We knew right from the get-go that there was not a lot of speed in the race, and he was going to be close. Obviously, we’re coming from seven furlongs to 1 1/8th today. He broke well. I got a nice position passing the wire for the first time. Going into the first turn, we were in the perfect position to save ground there. When he went around the other horses in front, he moved all the way to the inside. Dettori (on Kings River Knight) went inside and kind of pushed the other horse out. Now I’m going very wide on the second turn, which is not what I wanted to do. But I saw Flavien (aboard eventual runner up Aligato) slip in there on the turn, and he’s the horse to beat. So, I had to move to hold his horse in there because that was the only way to beat him. The horse responded to everything I wanted to do and when I asked him, he was there just enough to beat Flavien and the other horse coming from behind.

“It’s nice to be here riding all these good horses and a lot of good opportunities, it is very fun.”

CARLA GAINES, COALINGA ROAD, WINNER: “I loved our horse today, I just didn’t want to run against The Chosen Vron (in the California Cup Sprint earlier on the card). Coalinga Road is so versatile that he could have run in the sprint or the route, and I was surprised that they entered the other horse in both.

“I can’t describe in words how important the support from John Harris has been. This is so major, I’m having to fight back the tears.

“Someone told me one time about owners in this industry that there are those who have fired you, and those who haven’t fired you yet. That’s not the case with him. John gave me Glory Quest, the first horse I ever had.”

JOHN HARRIS, HARRIS FARMS, WINNER: “We came down here and I just wanted him to hit the board…This horse just keeps getting better. Carla is always a great trainer, she gets them right on race day. So it is really a thrill to be here.

“I was hoping he would get by those horses. Once he got the lead, I felt pretty good, I just didn’t know if he would catch them or not.”