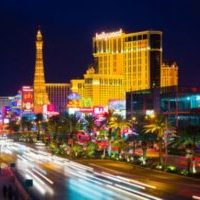 Lyfts with No Drivers Come to Las Vegas Strip

Las week we spoke about the Las Vegas Strip, and we told you about several new things headed to Sin City. That included the upcoming Formula 1 race, where cars will streak through the city at speeds of over 200 miles per hour. But they won’t be the only exciting cars out there.

Calling a Lyft to get to your destination may not be a new thing, but driver-less cars sure are. And believe it or not, your next Lyft could show up with no driver! The company has partnered with partnering with the Motiona company to make it possible.

Motional’s is designing a Hyundai Ioniq-5-based robo-taxi, if you will, to deliver an autonomous vehicle which will eventually result in a ride-hail operation which uses no human drivers. The company, based in Boston, has partnered with Hyundai to bring cars with no drivers to the Las Vegas Strip.

But before you get too excited, there is one rather large caveat. The Lyft with still show up with human co-pilots, so to speak. At least, for now. Until all the bugs are worked out and testing is completed, there will be two backup drivers present to take control should things go wrong. Umm… what?

So, if the thought of riding in a robot driven vehicle down the Las Vegas Strip excites you, then by all means have fun. For us? Well, we may just wait until all the “bugs” are out. Call us what you will!