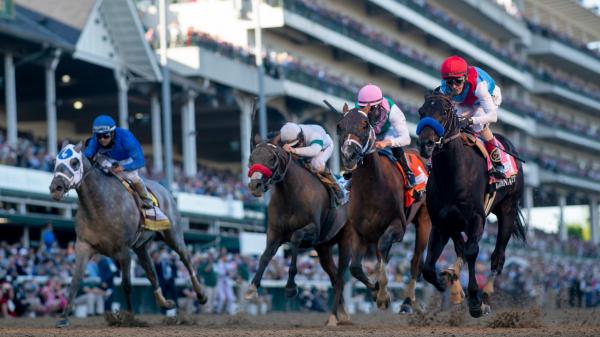 While the more than nine-month delay between Medina Spirit failing a post-race drug test after the 2021 Kentucky Derby Presented by Woodford Reserve and Kentucky stewards conducting a hearing was unusual, those racing officials entered a rather standard decision Feb. 21.

Kentucky stewards on Monday disqualified Zedan Racing Stables’ Medina Spirit from victory in the May 1, 2021, Derby at Churchill Downs after a post-race test (and split sample) indicated the presence of the corticosteroid betamethasone, prohibited at any level on race day. Medina Spirit’s Racing Hall of Fame trainer Bob Baffert, was suspended for 90 days and fined $7,500.

In Kentucky, betamethasone is a penalty Class C substance, a level considered to have “a lesser potential to influence performance” compared with the performance-enhancing effects of drugs in Class A or B. The penalties assigned by the stewards are in line with Kentucky’s recommended sanctions for such a finding.

Those recommendations call for the horse owner to be penalized through a disqualification of the horse and loss of purse. As for the sanctions of Baffert, they are in line with a Class C finding but appear to have included the trainer’s four failed drug tests in the 12 months leading up to the Derby as mitigating circumstances. Penalties recommended for Class C for three or more offenses call for a suspension of 30-60 days and a $2,500-$5,000 fine absent mitigating circumstances.

“I am very disappointed in the ruling,” Robertson said. “It runs contrary to the scientifically proven facts in this case and the rules of the Kentucky Horse Racing Commission.”

Baffert’s attorneys have argued in court that Medina Spirit’s test results indicating betamethasone were linked to the colt receiving treatment with the anti-fungal ointment Otomax for a skin issue on his hindquarters. They have since said that testing at a New York laboratory backs up their theory that the failed post-race test was caused by the ointment, rather than an injection.

In a Dec. 3 release about the testing by Dr. George Maylin at the New York Equine Drug Testing and Research Laboratory, Robertson not only said that the results point to the ointment as being the source, but added that Kentucky rules do not apply to the type of betamethasone from the ointment. The stewards’ decision Monday made no differentiation.

If the connections appeal, the first stop in that process would be at the regulatory level – to the full Kentucky Horse Racing Commission. Typically under such an appeal, the KHRC will bring in a hearing officer who will consider evidence and testimony before making a recommendation to the KHRC. The commission typically follows that recommendation, although it’s not required.

With the stewards’ decision in place, Medina Spirit is placed last in the field of 19 and Juddmonte Farms’ homebred Mandaloun is declared the winner. All other runners are moved up one spot. The changes give Juddmonte, trainer Brad Cox, and jockey Florent Geroux their first Kentucky Derby wins. Rounding out the top four 2021 Derby finishers are Hot Rod Charlie in second; Essential Quality, third; and O Besos, fourth.

The disqualification removes a Derby win from Baffert, who initially secured a record seventh victory in the race when Medina Spirit completed a front-running victory under John Velazquez, also a Hall of Famer who entered the 2021 race with three previous Derby scores including in 2020 aboard Baffert-trained Authentic.

It is the second time in history a horse has been disqualified from victory in the Kentucky Derby for a failed post-race drug test. In 1968 Dancer’s Image was disqualified after testing positive for phenylbutazone, or “bute.” That decision ultimately would hold up after years of litigation, making Forward Pass the winner.

In 2019, Maximum Security reached the wire first in the Derby but was placed 17th for interference on the final turn, elevating Country House to first.

Medina Spirit died after a Dec. 6 workout at Santa Anita Park. That sudden death, believed to be a heart attack, is being investigated by California regulatory officials.

Since the Derby test results were announced, Baffert has been banned from running horses at Churchill Downs Inc. tracks. His runners are not able to earn points in the Road to the Kentucky Derby series that shapes the Derby field. Those actions were taken by the individual track operators, not the KHRC, which regulates the sport in Kentucky.