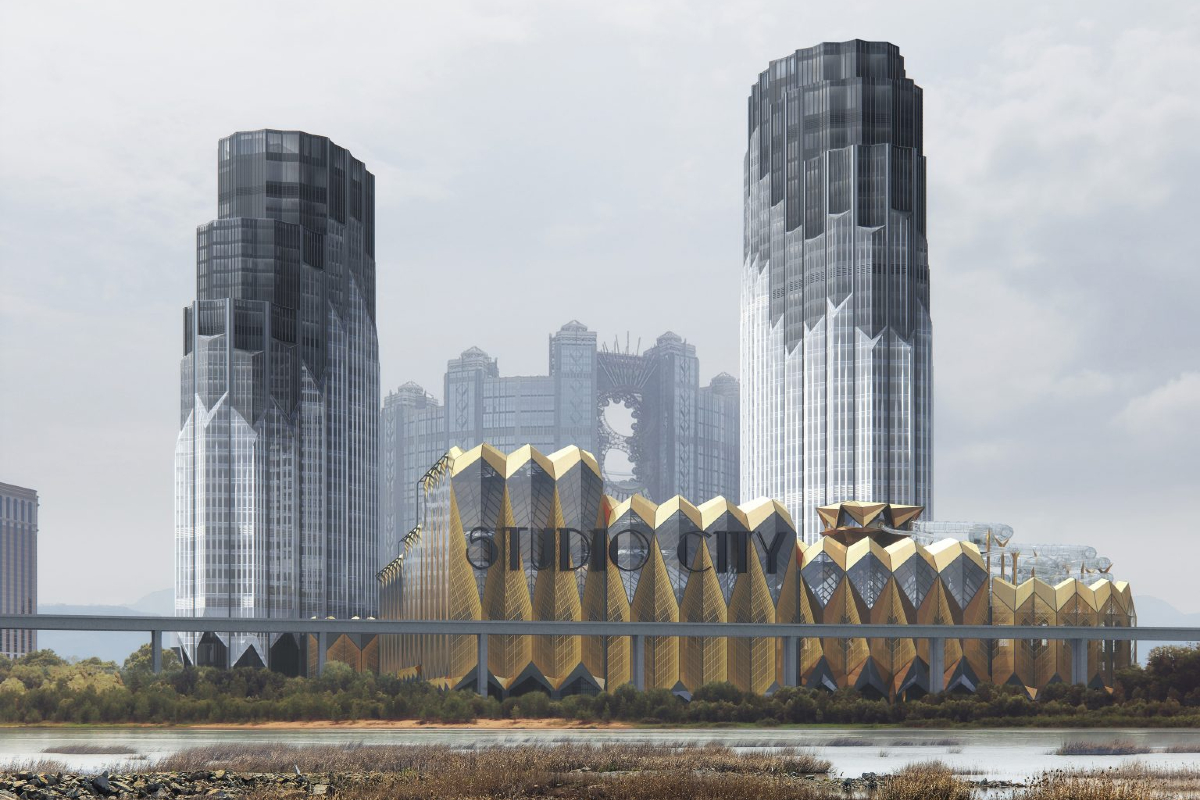 A rendering of the second phase of Melco Resorts’ expansion of Studio City on the Cotai Strip is pictured. The casino resort is planning to welcome guests to the expanded property in December of 2022. (Image: Melco Resorts)

Melco reps, including the company’s billionaire founder, chairman, and CEO Lawrence Ho, were on hand in Cotai to divulge fresh details regarding the design concept of the resort’s second and final planned expansion.

Phase 2, a $1.3 billion undertaking, is being designed by Zaha Hadid Architects, the same firm responsible for envisioning Melco’s Morpheus tower at City of Dreams. The Studio City expansion is highlighted by what Melco is dubbing “one of the largest indoor and outdoor water parks in all of Asia,” a movie theater, new meeting space, and an additional 900 guestrooms and suites in two towers.

Ho said at the ceremonial event that “99 percent” of the $1.3 billion budget is being spent on nongaming amenities and attractions. Ho added that the Studio City expansion demonstrates Melco’s ongoing commitment to Macau’s larger goal of diversifying the region from a casino-focused hub.

Macau officials in the Chinese Special Administrative Region (SAR), along with input from Beijing, have sought to bring new attractions and business to the area in recent years.

Lawrence Ho is the son of Stanley Ho — Macau’s “King of Gambling” who died last year at the age of 98. The late Ho held a monopoly on casino gambling in Macau until 1999 after China retook control of the enclave, and the new autonomous region welcomed in new casino operators a couple of years later.

Studio City Phase 2 reaffirms our ongoing commitment to the city and contributes to reinforcing Macau’s non-gaming proposition in Asia and internationally,” Ho declared.

China’s central government helped Macau create its own bond exchange in 2018 that is called the MOX. The financial institution provides bond trading services and is helping bridge Macau’s gap in direct financing channels.

But Macau and China want more non-gaming in town, and Melco’s focus on such entertainment outside the casino should find favor in the eyes of government leaders both in Macau and back on the mainland.

Of the approximately 2.7 million square feet of floor space involved in Studio City’s phase two, less than 25,000 square feet is being allocated for gaming.

Melco Resorts originally planned to open its second phase of Studio City in May of 2022. That has since been pushed back to due construction and supply delays caused by COVID-19.

Melco says it’s now targeting December next year to debut the completion of the resort. Interestingly, that goal is six months after Melco and the five other commercial casino licensees are set to see their gaming privileges expire.

Melco pointing to December of 2022 might hint that Macau will — as many expect — will opt to extend the six casino concessions past their current June 2022 expirations.