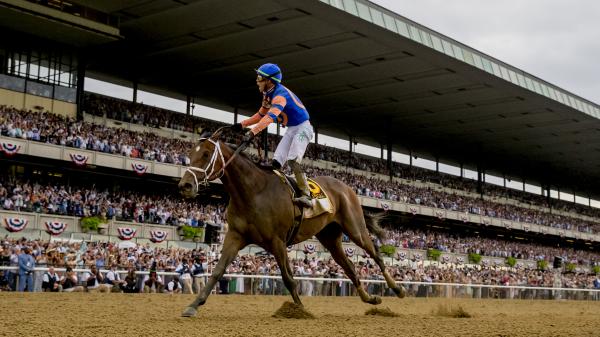 Veteran owner Mike Repole, who proudly identifies himself as “Mike from Queens,” enjoyed a one-two finish with Mo Donegal and the filly Nest on Saturday at Belmont Park in a race he covets more than any other.

“It’s a 40-year dream,” said an emotional Repole, 53. “Coming to this track and Aqueduct, being a kid from New York, this is New York’s race.”

Repole had six previous starters in the final leg of the Triple Crown. Stay Thirsty had provided his best finish, placing second in 2011 to improbable longshot Ruler on Ice.

“I watched the replay 150 times. I will no longer watch that replay,” Repole said of that agonizing outcome. “Getting a first and second here, it makes up for it. This was the biggest goal of my racing life, and I just accomplished it and ran one-two.”

It added to the sweetness of the outcome that Mo Donegal is a son of Uncle Mo, the magnificent 2-year-old champion that Repole campaigned in 2010. The colt proved to be star-crossed, however, when he developed a rare ailment the following season and had to be scratched the day before the Kentucky Derby. He missed all of the Triple Crown races and never regained the brilliance he displayed as a juvenile.

The Uncle Mo connection played a huge role when Repole decided to purchase a 25 percent interest in Mo Donegal from Donegal Racing the week before this year’s Kentucky Derby Presented by Woodford Reserve. The reconfigured ownership group had the misfortune of drawing the rail and Mo Donegal was in trouble from the start in finishing fifth in the Run for the Roses.

Trainer Todd Pletcher, who has enjoyed a long association with Repole, earned his fourth Belmont score. That ties him with Max Hirsch, R.W. Walder and former mentor D. Wayne Lukas for fifth on the all-time list. James Rowe (eight) is at the top of the heap followed by Sam Hildreth (seven), “Sunny Jim” Fitzsimmons (six) and Woody Stephens (five).

Pletcher, based at Belmont Park, earned his first three Belmont victories with the filly Rags to Riches (2007), Palace Malice (2013) and Tapwrit (2017). Interestingly, all four horses skipped the Preakness and the quick two-week turnaround from the Derby.

“We have certain things we want to do, coming here immediately after the Oaks and Derby and getting the horses settled in and training over the track,” said the Hall of Fame trainer, adding, “It’s not rocket science. We are trying to take advantage of being at home.”

It was also a huge afternoon for the Ortiz brothers, each of whom sported the royal blue and orange silks of fervent Mets fan Repole. Irad stalked expected front-runner We the People before pouncing with Mo Donegal as they turned for home in the 1 1/2-mile Test of the Champion. Jose was aboard Nest, who stumbled out of the starting gate but recovered quickly to be third in the early going. She closed valiantly and dug in during the final strides in an impressive bid to become only the fourth filly to win the Belmont. She finished three lengths behind her stablemate.

Irad and Jose drew their mounts close to each other after the wire so they could slap hands. Irad also had captured the Belmont with Creator in 2016.

“It’s very special,” Irad said of his second victory in a Triple Crown race. “I’ve been working with him all winter. They kept putting me on and he kept getting better. I liked him every time I got on him.”

There was no second storybook finish for Rich Strike, who produced a stunning upset in the Kentucky Derby at 80.80-1 and skipped the Preakness to take his best shot at the final leg of the Triple Crown. But he and jockey Sonny Leon languished in last in the early going and wound up a non-threatening sixth in a field of eight. That raises questions about whether he will be remembered as a one-race wonder.

“We were hoping we could have been a little closer and our pace was slow,” said Eric Reed, who trains Rich Strike. “Our biggest change was deciding to stay a little off the rail and try to give him a good, open run where he could take off. The whole way his head turned and he was trying to get to the inside. I guess we made a mistake not putting him on the fence.”

Skippylongstocking, who pressured Peter Pan Stakes winner We the People much of the way, finished a solid third. Mo Donegal covered the arduous distance in 2:28.28. He returned $7.20 for a $2 win wager.

The remaining order of finish was comprised of We the People, Creative Minister, Rich Strike, Barber Road and Golden Glider.