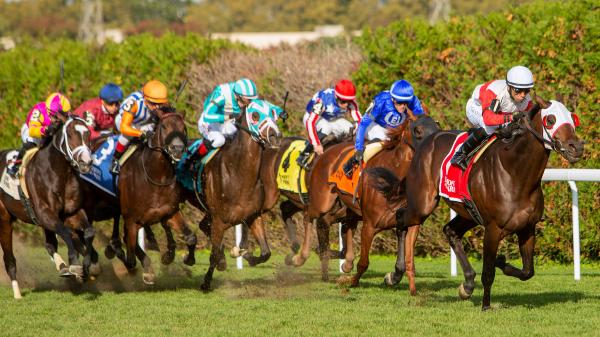 Fall weather is in the air and crisp, clear conditions are expected at Aqueduct for this Saturday’s 10-race card, which includes five turf races headlined by the $135,000 Gio Ponti Stakes for 3-year-olds. The Big A’s late Pick 4 will be offered on races 7-10, and the sequence appears extremely playable with all four legs of the wager looking up for grabs with wide-open fields. I have identified a pair of longshot plays in the late Pick 4 – in the first leg and in the last leg – and those horses can be bet on their own or combined into your Pick 4 tickets. If either or both come in, the value of the payoffs with skyrocket. Best of luck.

Saturday’s featured race at Aqueduct is this $135,000 stakes race at the distance of 1 1/16 miles on the grass that has drawn a quality nine-horse field. The horse to beat seems to be #8 Steady On (2-1) trained by Todd Pletcher and coming off good-looking, back-to-back wins on this turf course since being stretched out to two turns. Steady On has earned strong speed figures and shown versatile ability, first winning wire-to-wire two starts ago and last time winning easily after rating off the pace. Irad Ortiz Jr. will be back aboard for the mount. Along with the favorite, there is also a dark horse in the Gio Ponti, and that is #4 Ohtwoohthreefive (15-1) trained by George Weaver. Ohtwoohthreefive has not been embarrassed in various stakes spots to date, including a second by a nose on this course at this time last year in the Central Park Stakes, and much more recently when second behind favored Wit in the $135,000 Better Talk Now Stakes at Saratoga at essentially a very similar spot. The speed figure he earned in that runner-up finish puts him right with the top horses in this race and points him out as a longshot with a legit chance to start off the late Pick 4 with a big price in the tote board.

The Play: Start the late four with two horses on your ticket – the favorite #8 Steady On and a longshot, #4 Ohtwoohthreefive. Also bet Ohtwoohthreefive to win and box him in the exacta with Steady On.

The late Pick 4 at Aqueduct concludes with this maiden-claiming sprint for New York-bred 2-year-old fillies going six furlongs. The field is full of class droppers from the maiden special weight ranks who have failed to distinguish themselves and are looking for reboots down versus maiden claimers. None of those stands out, but what does stand out is a horse all the way on the outside that has already been knocking on the door at this level and is a live overlay at 10-1 odds on the morning line. That contender is #11 Maggie T, who is guaranteed to stick at or near the lofty morning-line odds with jockey Jalon Samuel aboard, since that rider never gets bet despite the fact he’s more than capable of winning when aboard a live runner in a spot like this. Maggie T ran into a buzzsaw winner in her career debut in a maiden-claiming race against open company at Saratoga but was clearly second best in that unveiling despite a bad start. Following another bad break from the starting gate in a maiden special weight defeat in her second start, Maggie T returned to the claiming ranks last time out against NY-breds and ran second again in an improved effort where she was in the thick of the race throughout at seven furlongs, and actually probably would have won the race had it been at today’s six-furlong distance since she had the lead in the stretch that day until getting passed late. In this very winnable spot, Maggie T and Jalon Samuel should get over the hump at 10-1.

The Play:  Bet on #10 Maggie T to win and use her as the key horse for race 10 in the final leg of your Pick 4 and other multi-race wagers.