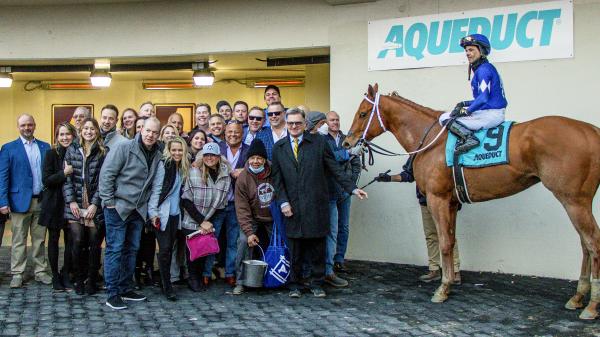 Blue Lion Thoroughbreds, which has eight horses overall, teamed with Craig Taylor and Diamond T Racing to purchase undefeated Derby prospect Morello for $250,000 at the 2021 Fasig-Tipton Midlantic 2-year-olds in training sale. The son of 2016 Breeders’ Cup Juvenile winner Classic Empire is viewed as a top contender in the 1 1/8-mile Wood Memorial Stakes Presented by Resorts World Casino on Saturday at Aqueduct.

Morello is trained by Hall of Famer Steve Asmussen. He controlled the March 5 Gotham Stakes by 4 ½ lengths under a mild hand ride from Jose Lezcano to earn 50 qualifying points, more than enough to ensure a spot in the Kentucky Derby starting gate.

He also won his previous two races at Aqueduct, breaking his maiden there on Nov. 27 before dominating the Feb. 6 Jimmy Winkfield Stakes by five lengths, also under a hand ride from Lezcano. The Wood Memorial is among the last major Derby preps and will reward the top four finishers qualifying points on a 100-40-20-10 basis.

Lyon participated in a question-and-answer session conducted on behalf of America’s Best Racing:

PEDULLA: How did you become a racing fan?

LYON: I’ve been a racing fan literally my entire life. Growing up in Saratoga [Springs, N.Y.], it’s in your blood to at least be exposed to it. I’m grateful to my parents for taking us to the racetrack when we were very young. I literally fell in love with it as far back as I can remember.

PEDULLA: What is your occupation?

LYON: I own a commercial real estate appraisal firm in Manhattan.

PEDULLA: When did you form Blue Lion Thoroughbreds?

LYON: Blue Lion was formed in 2016. I was kind of always thinking about it before then.

PEDULLA: Where does Blue Lion come from?

LYON: It’s kind of a play on my last name. Our colors are blue and white. That is an ode to Saratoga High School. We are the Saratoga Blue Streaks.

PEDULLA: Sounds as though you are proud of your high school.

LYON: Of course. Once a Blue Streak, always a Blue Streak. I’ve lived on Long Island now for 25 years. My daughter is going into her senior year here. Part of me still thinks my 10-year-old son may graduate from Saratoga. Don’t tell my wife.

PEDULLA: It sounds as though your heart remains in Saratoga.

LYON: It’s just a wonderful place to have grown up. A lot of people who have grown up there always have an affinity to get back there. This sport brings me back there every summer. My parents are still there. I still have a lot of family and friends there.

PEDULLA: Why did you form Blue Lion?

LYON: I’ve always been a guy who was kind of hands on. I’m just one of those people who wanted to have his hands on everything. I don’t get in the way of the trainers. But I like to know a bit about everything we’re doing. Growing up, you envision your own silks on a horse. That kind of drives you to be where you need to be.

PEDULLA: What can you tell me about Morello? He was not inexpensive.

LYON: No. Blue Lion owns a third of Morello. We wanted to dive a bit deeper and have a classic-type horse. Having partners outside of Blue Lion gave us a lot more purchasing power. He was a quarter of a million dollars. Obviously, he’s worth a lot more now. We kind of think we stole him. We were ready to go a little bit deeper on him. We are grateful we were able to get him for just $250,000. His breeze at that sale was just tremendous. He was our favorite horse.

PEDULLA: Was a bloodstock agent involved in the purchase?

LYON: David Ingordo. David is a good friend of mine. I was actually introduced to David by Terry Finley [head of West Point Thoroughbreds]. There is no one I trust more to buy a horse than David. His record speaks for itself.

PEDULLA: I think it’s always hard to know what you bought. In this case, Morello has not disappointed.

LYON: No, not at all. Steve and Toby Sheets, his assistant, they’ve done such a good job with him. A lot of people go to 2-year-old sales and they are really anxious to get a now horse that is going to be ready for Saratoga. Obviously, you want to run your 2-year-olds at Saratoga. Morello took a bit more time. We were patient with him and we’ve now been rewarded. I’d rather run him in the Travers as a 3-year-old than rush him into a 2-year-old race. The patience has definitely paid off.

PEDULLA: Is distance an issue for Morello?

LYON: I don’t think so. Until a horse goes two turns, the pundits will question whether they can do it or not. If you look at all three of his races, he’s just been in kind of third gear. Jose has not really touched him nor has he really asked him. I’m a big fan of the gallop out. There is nothing I have seen, in my humble opinion, that would keep him from going another furlong or two. We’ll find out on Saturday.

PEDULLA: What are your expectations for the Wood?

LYON: I’m pretty high on the horse. We think we have a real talented racehorse here. He’s just getting better as time goes on. I give all of the credit to Toby and Steve for the program they’ve put him on. We’re just taking each day as it comes, but I’m optimistic we’re going to run pretty well on Saturday.

PEDULLA: What does it feel like to have enough points to go to the Kentucky Derby and to feel that you can contend?

LYON: I’m literally pinching myself right now. It’s not something I could ever fathom. I wanted to win one race. Our goal as a partnership is to win any type of race at Saratoga every year. That is a lofty enough goal. But to be talking about the Derby, it’s just mind boggling. It can be a once in a lifetime opportunity, and I’m telling my partners to enjoy every minute of it.

PEDULLA: Do you dream of winning the Derby?

LYON: I do. I’m pinching myself that we have an opportunity, but I really believe in this horse. He’s supremely talented. Just being around him, you can see his class. He’s got the “it” factor that is required of a horse to even compete in the Kentucky Derby. Honestly, the way he runs, just off the pace, I think that sets up nicely for the Derby. He checks off all the boxes to be a horse that can actually do this. It’s going to take a lot of good luck. But we’ve had it so far, and we hope it keeps going.