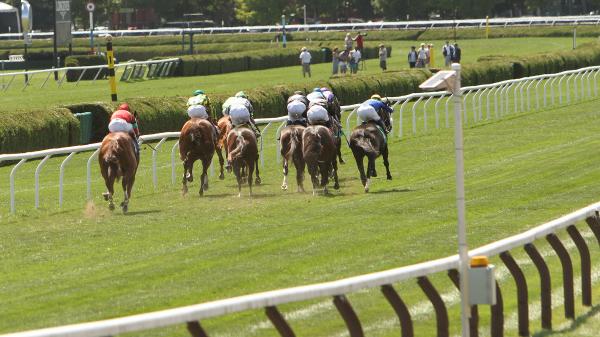 Before I get to this Saturday’s selection, apologies for missing last week’s piece. Travel woes got in the way. Hopefully, the price horse who has me intrigued will prove worth the wait.

The first race on Saturday’s card at Saratoga Race Course is salty. As you would expect, the pedigrees are deep and the barns sending them out command respect. That typed, I’m going to take a swing, and feel free to shy away, as I figure this horse is either sneaky good … or just plain bad.

That horse? The #8 Fire Baron, one of two colts entered for trainer Mike Maker. The other entry is the #6 Lord of the Navy, whose workout tab looks a bit better on the surface. Yet, if you expand that of Fire Baron’s, you find some three-furlong bullet drills on Keeneland’s main track. Interesting. It always catches my attention when a firster with turf pedigree can post a ‘best of’ workout on the dirt. It’s also interesting that Luis Saez lands in the saddle.

Is there more to Fire Baron’s story? Am I reaching? Possibly. The colt, however, is 12-1 on the morning line and does have a pedigree worth discussion. He’s by turfer Temple City, who represents the Roberto sireline through Dynaformer. Recall that Roberto was a champion in Ireland and England, with wins in the Epsom Derby and Coronation Cup to his credit. Want grass? Stamina? Roberto is quite the influence, as evidenced through this very line.

As for mom, Saphiria … well, she didn’t exactly stun as a runner. She ran three times and was beaten by double digits in every outing, but she did produce Bryan’s Jewel, a stakes winner on both dirt and turf. Saphiria is a three-quarter sibling to 2002 champion older male Left Bank, whose wins include the Grade 1 Whitney Handicap.

Not so complicated, right?

On a sidenote, I also do love that you can trace this female family to Lady Josephine and her daughter Mumtaz Muhal. The branches of this extended family tree are responsible for some pretty impressive runners, past and present, like Mahmoud and Cracksman, just to name two.

In short, Fire Baron has a curious workout tab but a pedigree with obvious turf and stamina influences, and while mom never made it to the winner’s circle, she did produce a Grade 3 stakes winner and is a three-quarter sibling to a champion. We’ll see.

2022-08-12
Previous Post: Which New NFL Head Coach Will Have the Best Debut in 2022?
Next Post: Olivia Newton-John Remembered for Las Vegas Residency, ‘Grease’