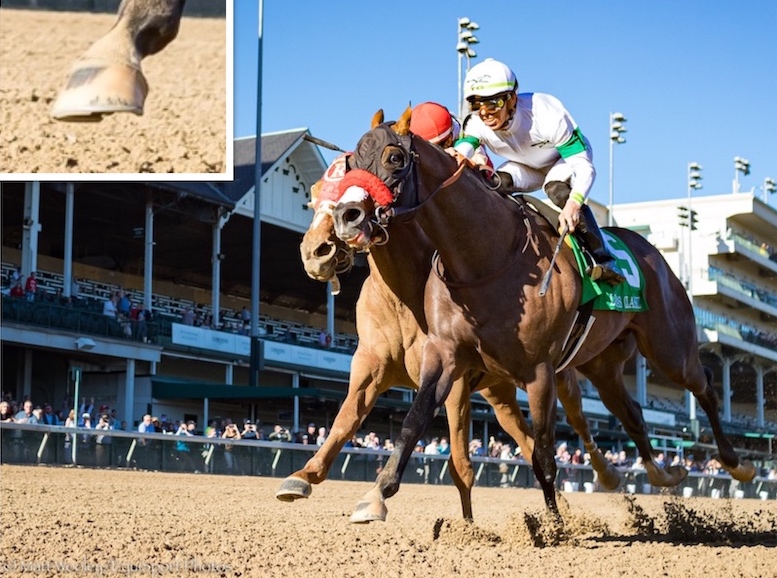 As if the Grade 2 Lukas Classic on Oct. 1 at Churchill Downs didn’t have enough controversy with the fighting finish between winner Hot Rod Charlie and jockey Tyler Gaffalione and runner-up Rich Strike and jockey Sonny Leon … there’s more.

On Tuesday, a trainer who had no horse in the Lukas Classic distributed photos to various parties, including the Paulick Report, of Hot Rod Charlie that purported to show a toe grab on a front shoe, which would be a violation of Horseracing Integrity and Safety Authority regulations.

The Paulick Report asked a Kentucky-based farrier not involved with either horse to look at the images, and he said they were inconclusive.

The trainer said owner Richard Dawson was having fellow horse owner Jerry Jamgotchian – no stranger to litigation himself – file a protest on his behalf, but wasn’t sure it had yet been submitted to the Kentucky Horse Racing Commission as of late Tuesday afternoon.

HISA rule 2276 prohibits traction devices in the forelimb, including but not limited to rims, toe grabs, bends, jar calks and stickers. In late July, HISA altered its original traction device ban on both fore and hind limbs to permit either a full outer rim shoe (up to 4 mm in height) or a toe grab (up to 4 mm in height) on the hind limbs for dirt races. Rule 2276 does not say whether violations may result in disqualification.

Prior to the creation of HISA, the Kentucky commission already had a ban on front limb toe grabs.

“I would like to address the current story and the photo contained in the article that have surfaced since Saturday’s win by Hot Rod Charlie in the Lukas Classic at Churchill Downs.

I swear on a stack of Bibles, that none of the horses in our stable wears toe grabs, and have not for years. I am 100% behind the science and studies that show toe grabs heighten the risk of limb injury, which is why we stopped using shoes with toe grabs long ago.

After seeing the photo, I don’t blame Eric Reed for questioning Charlie’s shoes. My only thought is that the photo is a weird reflection or is a result of it being altered.”

Hot Rod Charlie has been based at Keeneland the last several months.

Reed was proud of Rich Strike’s effort in his best race since shocking the racing world with an 80-1 upset of the Grade 1 Kentucky Derby.

“He’s getting better, but still has a lot to learn. He’s still green,” the trainer said.

Reed defended jockey Leon’s actions in deep stretch, when head-on video showed him leaning on Hot Rod Charlie and elbowing Gaffalione, at one point losing his balance and falling to his left. Leon claimed the saddle slipped to the left, causing the incident, but stewards suspended him 15 days, saying he “intentionally” tried to interfere with Hot Rod Charlie.

“The saddle did slip,” said Reed. “He rides kind of ugly the way he moves his arms, but it was race riding; he was just trying to win the race.”

Reed said there will not be a change in jockeys for Rich Strike’s next start.

“That’s not going to happen,” he said.