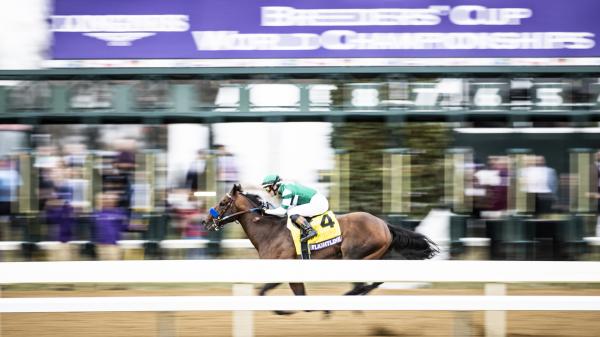 Tom Pedulla presents 10 key takeaways from the 39th Breeders’ Cup World Championships, which were a resounding artistic and financial success in their return to Keeneland for the third time.

TAKING CARE: Even as fans acknowledge runaway Longines Breeders’ Cup Classic winner Flightline as one of the great horses of all time, they will always wish they could have seen the brilliant colt make more than six starts through his 4-year-old campaign. Trainer John Sadler defended his conservative handling of a horse that was not ready to race at 2 and was prone to setbacks. “What I’ve tried to be is a good steward to him, be fair to him,” he said. “And if you’re good with your horses, they’re good with you.” Impossible to quibble with that.

SENTIMENTAL TRIUMPH: No victory was sweeter than that achieved by Cody’s Wish in the Big Ass Fans Breeders’ Cup Dirt Mile. The 4-year-old Curlin colt was named after 16-year-old Cody Dorman, who was born with a rare genetic disorder known as Wolf-Hirschhorn syndrome. Godolphin homebred Cody’s Wish was named after the courageous Dorman after the boy met him as a foal as part of Keeneland’s association with Make-A-Wish Foundation. The two formed an immediate connection, with the foal inching toward Cody’s wheelchair before laying his head in the boy’s lap. “He’s just been a special horse for the family, for us, and it’s just like a Hollywood story,” said Michael Banahan, director of bloodstock for Godolphin USA. “It’s hard to script.”

INQUISITIVE FILLY: Equipment changes such as the addition of blinkers are typically made when a horse is young. Four-year-old Malathaat is a glaring exception to that rule. Trainer Todd Pletcher dded blinkers four starts ago, leading to a second-place finish and a three-race winning streak that includes a hard-fought decision in a thrilling blanket finish in the $2 million Longines Breeders’ Cup Distaff. “It’s something we’ve actually been thinking of since her 2-year-old year,” Pletcher said. “She’s a very curious filly. She sees everything. And she has that tendency to wait when she makes the lead.” Her timing was perfect when it counted most.

PIVOTAL DECISION: After Forte won the Hopeful Stakes at Saratoga Race Course, trainer Todd Pletcher and co-owners Mike Repole and Vinnie Viola had to decide which Grade 1 race would best prepare him for the $2 million FanDuel Breeders’ Cup Juvenile Presented by Thoroughbred Aftercare Alliance. Should they remain in New York for the one-turn Champagne at Aqueduct or ship to Keeneland to give the Violence colt a race on the track at the Juvenile’s 1 1/16-mile distance in the Claiborne Breeders’ Futurity? They chose the latter and Pletcher said, “He got that two-turn experience and it paid off. He was much more professional. The last time, he made the lead pretty comfortably. But he got to waiting and laying on the horse next to him. So [Friday], if we were lucky enough to get in position to get [the lead], we wanted to give ourselves plenty of space and not get too close to the horse next to him.”

RECORD WAGERING: This year’s Breeders’ Cup undoubtedly packed world-wide appeal. Total all-sources global common pool handle reached $189,060,373, a record for the two-day event. It represents a 3.4% increase over the previous mark of $182,908,409, set last year at Del Mar. Total handle jumped 18% from $160,472,893, when the Breeders’ Cup was last held at Keeneland two years ago amid the pandemic. The event heads to the West Coast and Santa Anita Park next year for its 40th edition.

STREAKING: Elite Power notched his fifth consecutive victory when he rallied to defeat C Z Rocket by a length and a quarter in the Qatar Racing Breeders’ Cup Sprint. Not bad for a son of Curlin that went unraced at 2, finished sixth and fourth in his only two starts at 3, and did not break his maiden until a nine-length romp on June 5 at Churchill Downs. How to explain the remarkable turnaround? “It was just a matter of waiting for his bones and his mind to mature a little bit,” said Hall of Fame trainer Bill Mott. “Once he got into a rhythm, he just kept improving.”

LIKE FATHER, LIKE DAUGHTER: Chad Brown got to know Ghostzapper extremely well as an assistant to Hall of Fame trainer Bobby Frankel when that horse staged a scintillating performance in the 2004 Classic to secure Horse of the Year honors. It was no secret that Ghostzapper could be as fragile as he was talented in a career in which he was limited to 11 starts, nine of them victories. Ghostzapper passed on both his brilliance and his delicate nature to Goodnight Olive. The 4-year-old turned only her seventh career start into her sixth victory with an authoritative 2 ½-length score under Irad Ortiz Jr. in the Breeders’ Cup Filly and Mare Sprint. “She’s a lot of her dad, tough as nails and might not run a lot,” Brown said. “But when she does, she lets everyone know she does.”

LOOKS MATTER: The key to sustained success for a young horse is how well it transitions from its 2-year-old season to 3. In the case of Modern Games, a son of Dubawi, he ultimately continued to blossom in adding the Grade 1 FanDuel Breeders’ Cup Mile Presented by PDJF to his 2021 Breeders’ Cup Juvenile Turf success. “From this July onward, he really changed physically and got stronger in all the right places,” trainer Charlie Appleby said. “I thought he looked a picture in the paddock and I was always quite confident when I saw him look that well.” The great news is that Appleby intends to point the Godolphin homebred to next year’s Breeders’ Cup at Santa Anita in a bid to join Goldikova and Beholder as the event’s only three-time winners.

DERBY TRAIL: Trainer Tim Martin was disappointed but hardly without hope after a bleeding episode caused Iowa sensation Tyler’s Tribe to be vanned off after the Breeders’ Cup Juvenile Turf Sprint. The gelded son of Sharp Azteca had dominated his first five contests, all at Prairie Meadows, by a combined margin of 59 ¾ lengths before trying the turf at the Breeders’ Cup. Martin intends to keep him off the grass moving forward as he eyes stretching him out with the goal of reaching the Kentucky Derby Presented by Woodford Reserve. “I always felt when he ran long he would be really good,” Martin said. “He’s got natural speed. He can put himself wherever he wants. He’s not a speed-crazy horse. He settles.” Martin is targeting the Jan. 1 Smarty Jones at Oaklawn Park for the youngster’s 3-year-old debut.

SUCCESS AT LAST: After going winless with his first 34 Breeders’ Cup mounts, Tyler Gaffalione finally broke through with Wonder Wheel in the $2 million NetJets Breeders’ Cup Juvenile Fillies. It was anything but easy in the early going. “Things didn’t really go as planned. We wanted to be more forwardly placed,” said Gaffalione. “She didn’t get away too well. There was a lot of traffic in that first turn, everyone trying to secure their spots. I kind of got pushed back.” The unflappable Gaffalione began weaving his way through traffic and Wonder Wheel proved to be every bit as good as Hall of Fame trainer Mark Casse had advertised.