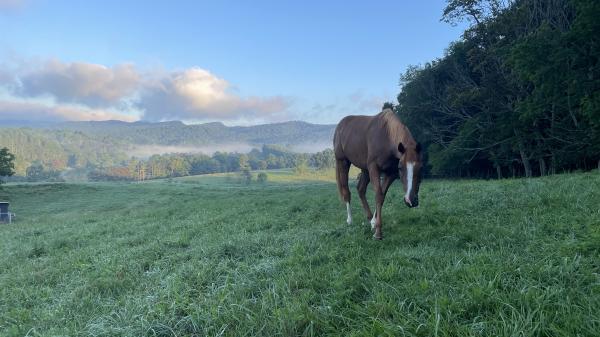 Ever since I was a little girl, I have always wanted to show at the Virginia Horse Center. It’s about two hours away from our town and such a beautiful facility. I was so excited to discover that the Virginia Starter Horse Trials were being held there and offered just dressage tests in addition to the horse trials. Fin had conquered being stalled last month, but I also did not want Kentucky to be her first overnight show experience. This seemed like the perfect opportunity to get Fin in a bigger environment, practice our dressage tests, and practice our traveling skills!

I was pretty nervous about what all would go into traveling to an overnight show. For some reason, being gone overnight to an event seems so much more nerve-wracking than traveling for just the day. I scrambled around the night before packing hay, shavings, and cleaning tack and barely managed to sleep because of the excitement!

When I got to the farm Saturday morning, all the horses were at the bottom near the trailer and I’m certain they could sense that something was up. I always put the boys in the corral so they don’t interfere with loading and leaving, but of course this particular morning they were all feeling their oats and running around even after I put them away. Because of this, Fin was really keyed up, an unusual occurrence and not a good sign for having a nice loading experience. Of course, when I did ask her to load the first time, she was not having it. Instead of getting flustered I walked her over to drink some water and tied her to the trailer to groom for a minute hoping this would calm her down. It worked just enough for her to load the second time I asked and I made sure to tell my husband, Mike, to shut the door quickly! We were able to pull out of the farm with minimal hollering between Fin and the boys and hit the road.

To get to the Virginia Horse Center from Wytheville, it is a straight shot up Interstate 81. I-81 is known for having awful traffic. We had pretty good luck until we got near Roanoke. There was a backup on the interstate and the last thing I wanted to do was sit in traffic with Fin on a hot day. With Mike as my copilot, we decided to get off and take a slightly longer route through the town. While it might have added a bit more time to our journey, I felt better knowing that we would be able to keep rolling down the road and keep our standstill time at a minimum.

Once we got to the horse center, my job was to figure out where we would be stabling. It is quite a large facility for someone who has never shown there before. Mike found the stable office and I had my pick of the stalls in the barn. I chose a middle aisle stall that was right beside the doors, wash stall, and restroom. I figured that would give Fin pretty good exposure to all the happenings – and boy was I right. We even ended up being stalled beside some fellow Makeover competitors, Juliana May and Panda, and have plans to share a tack stall and stable beside each other again in Kentucky.

Fin settled in nicely and quickly, and I truly think she enjoyed being right in the middle of the action. That afternoon, I took her for a schooling ride in one of their many arenas. She was a little unsure about a golf cart that came out of the woods and some orange sand bags, but she quickly overcame that nervousness and we had a lovely schooling ride. It was quite hot and humid and we both worked up quite a sweat. I decided it would be a good time to try hosing her down in one of the wash stalls. Our farm is spring fed, so we currently do not have running water for baths at home which meant that this would be a new experience. I’m happy to report that she handled her bath like a pro. I’m sure that it felt really nice on such a gross, sticky day and that cooling off in her stall with the fan was a real treat!

I wanted to spend that afternoon showing her around, so while my husband went off to find a fishing spot, we explored the grounds. I was able to walk Fin into their big indoor arena and she was very excited about the space. After a little look around, she settled in. When we left the indoor, I took her to the arena where the jumps were set up and they were almost as tall as her! The look on her face when she sniffed a massive jump was hilarious and she seemed to be saying, “Please don’t tell me we have to do this?!”

The next morning I woke up at the crack of dawn to go check on her. She was snoozing nicely in her stall and was still relatively clean! Since we were just doing dressage tests and at the lower levels, we had to wait all day for our ride times. The weather forecast was calling for thunderstorms right as we were supposed to go on but I was crossing my fingers for good luck. When it was finally time to get ready, the forecast showed the rain would hold off just long enough for us to get our rides in! I tacked up about 45 minutes before our times in order to make sure Fin was relaxed by then. We had a nice schooling and she even picked up the canter lead both ways!

We did our tests, Intro A & B, almost back to back and they both went off without a hitch. Fin was a little behind the leg, but I think this was because I overestimated how much time we needed to get her warmed up and settled – lesson learned. Compared to our show in May, she was so much more relaxed and attentive to what she was doing. I am super proud of how she handled herself and amazed at the difference between how she was in May compared to this show. We need to work on our geometry and Fin’s suppleness, but I am confident she will get better as we continue our training.

We had a safe trip home but when we arrived Fin had loosened one of her shoes – imagine that! On top of all the rain we have had in southwest Virginia and her less than ideal hooves, she has developed an abscess. We have been battling with it since the beginning of August and our friend, Sarah Ryan, has allowed Fin to move into a stall while she heals. Dr. Moore is hopeful that it will resolve soon and I am crossing all my fingers! I’m a bit nervous as we are cutting it a little close to October, but Fin’s wellbeing is my utmost priority so we will take as long as she needs to heal.

2022-08-16
Previous Post: Promotion at Molly’s – Part I of II
Next Post: Pragmatic Play secures a new multi-vertical partnership in Brazil with Smashup