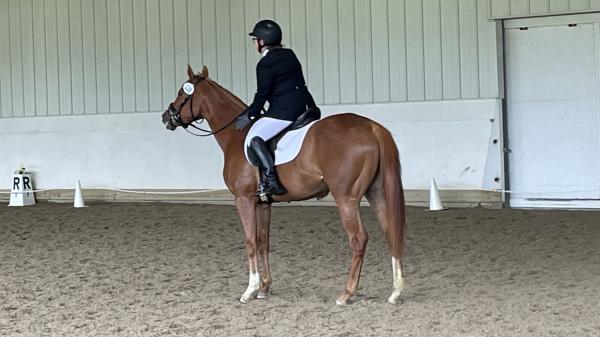 This past month, a dream that I have had for a very long time came true. To most, it might not seem like a big deal. But for me, this is something that I have wanted to do since I was a little girl. I have been riding since I was four, but this was the first time I have ever entered the show ring on a horse: Fin and I got to experience both of our first shows together. I was surprised at how well it went!

As discussed in my previous blog, we had lost riding time in March due to an abscess. So I was thrilled when it healed and I was able to take a lesson at my trainer Katherine’s farm. During this lesson, Katherine made the comment that she thought Fin was ready to tackle Intro A and Intro B dressage tests. I held this in the back of my mind as we continued with her training at home. I felt really unsure if we would be ready to go out and try our hand at showing just yet. After all, it would not just involve being able to ride the test, but to trailer there and back as well.

Fin and I are lucky to have friends around town that allow us to trailer to their farms to ride. The exposure is great for Fin, and trailering nicely was one of my biggest concerns when considering whether to enter a show. So, we planned a trip to our friend Jeff’s farm. Jeff is a wonderful trainer who focuses on ranch work, so his arena had a bunch of fun things to expose Fin to. She didn’t bat an eye at the roping dummy, bravely drug a dead Christmas tree behind her, and even stepped onto the wooden bridge obstacle! We were also able to get some great canter practice done – it was much easier for Fin to support herself with arena fences at the canter.

Loading to go home was not a great experience, though. She threw a fit. It felt like she had reverted to when she first arrived to me. Jeff had previously worked with us on her loading, so it was an added embarrassment to have this happen in front of him. However, I am thankful that Jeff was around to help me. It took some coaxing from both ends, but she eventually got on the trailer, and we made it home.

This experience made me realize that I have more work to do. Sure, I have been consistent in that she eats dinner on the trailer daily. But I had gotten pretty lax about just letting her self-load rather than walking her on the trailer myself. We now practice loading daily and I have a rule that she only gets a treat if all four feet are on the trailer. This has really made a difference and now she practically mows me over to get on the trailer for a treat…at least at home.

Before my next lesson, I saw a local stable was having a dressage schooling show in early May. I kept this in mind as Katherine and I worked on teaching Fin that she can bend her neck without her shoulders following, that she can, in fact, go forward, and general consistency in our geometry. After our lesson, I mentioned the schooling show and Katherine supported my idea to enter. So, that night, I completed our entry form and ordered white breeches.

The night before the show I had a hard time sleeping. I was excited, but I could not shake the feeling that we would get there and she would refuse to load to come back home. But I pushed through those anxieties. To add to the fun, my friend Sara came along with her horse, Theo. Luckily I had the foresight to practice loading Fin with a buddy on the trailer before we tried this on show day. We loaded Theo first because Fin does not tolerate being closed up in the first stall yet. When we went to pick up Fin and she loaded like a champ…all four feet on the trailer gets a treat, after all! Then we took off like a herd of turtles in our 2001 F150 who is very fondly known as Bertha. From what I could tell in the driver’s seat, there was no drama and it was a smooth ride to the show.

Once there I was glad I had decided to pay for a stall at the show! Fin was excited to be in a new place. She’s very vocal when she’s excited and I’m sure everyone knew that she had arrived! We got there about an hour before my first test – just enough time to clean her off, tack her up, and get myself dressed. The arena was open for schooling and once we got down there and I got on, she was more manageable. The decorations on the letters were a little suspicious looking, but after several good sniffs they were no big deal. We had a good warm up with the arena to ourselves and ran through both tests.

We trotted down our first centerline and overall the first test went well. Fin was inconsistent in the contact and a bit of a wiggle worm, but I was pleased, especially for her first ever test! We were both more relaxed in our second test. She was still a bit wiggly and our geometry wasn’t perfect, but it gives us some things to work on at home. We earned a 62.812% on our Intro A and a 62.5% on Intro B; hopefully it’s only up from there!

After our tests she got to hang out in her stall while we waited on our friend Sara to complete her rides. I went back to check on her when we were getting ready to head home and was surprised to find her sound asleep. I was thrilled to see how much she had calmed down throughout the day. I felt guilty interrupting her nap, but we did need to go home. We loaded up Sara’s horse, then drove to the barn where Fin was stalled. The day had gone so well, this was the last thing that needed to happen smoothly.

At first, she was reluctant. My husband Mike had parked the trailer on a hill and the step up was rather large for little Fin. We tried a few times, but then decided to move the trailer to more level ground. She was still a little hesitant once her step up was smaller, but she was not losing her mind about it, which is marked improvement. With a little bribery (AKA a handful of feed in her pan on the trailer floor) she stepped up and on quite calmly. I don’t think I’ve ever felt more relieved!

Our plans for the coming month are to work on her consistency in the contact and in her gaits, more and more lessons, practice loading and traveling even more (shocker), and maybe another fun off-farm excursion. Stay tuned!