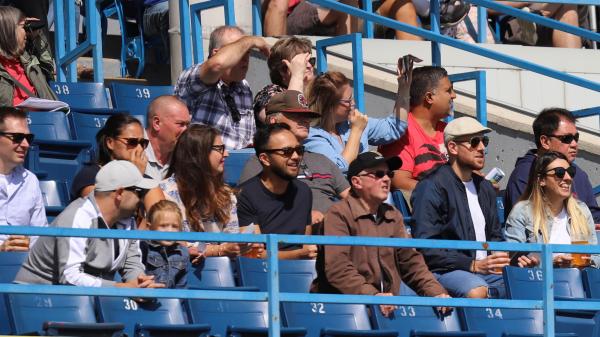 The 2022 edition of the $1 million, Grade 1 Ricoh Woodbine Mile Stakes Saturday at Woodbine features a field of 11 vying for the $600,000 winner’s share of the purse as well as an automatic berth in the FanDuel Breeders’ Cup Mile in November. Modern Games, the 7-5 morning-line favorite, brings a $1.4 million career bankroll into the race as well as a five-for-10 record including a win in the Grade 1 Breeders’ Cup Juvenile Turf last fall and appears to be the one to beat.

Still, Ivar has won six of 12 races including the Grade 1 Shadwell Turf Mile in 2020 and enters Saturday’s race off a win. Shirl’s Speight is another proven at this level, having won the Grade 1 Maker’s Mark Mile Stakes this past April, and he also has a strong career record consisting of five wins in 10 starts on turf and all-weather tracks. The only filly in the Woodbine Mile, Wakanaka, has won seven of 13 races including the Grade 2 Dance Smartly Stakes in her most recent start, and she deserves consideration as well in this top-notch field. March to the Arch has banked over $1 million in a 33-race career and won the Grade 2 King Edward Stakes over this course in 2020, but he hasn’t won since July 2021. Last year’s Ricoh Woodbine Mile winner, Town Cruise, is back to defend his title, but he has finished fifth, eighth and fifth in his three starts since that victory. War Bomber enters off of a win in the Grade 3 Seagram Cup Stakes on Woodbine’s Tapeta main track, and although he has won three of six turf tries he’s facing the toughest field in his career. Get Smokin won the Grade 3 Tampa Bay Stakes in February 2021 and a minor stakes in May 2021 but is winless in six starts since. It should also be noted Get Smokin has a tremendous amount of early speed, as does Town Cruise and Mighty Heart, who won the Queen’s Plate Stakes on this main track in 2021 and the Grade 2 Autumn Stakes last November but is winless in five races since then. Finest Sound, like Modern Games, comes over from Great Britain. He was just beaten a neck in the Group 2 Celebration Mile Stakes near the end of August and enters Saturday’s race in the best form of his life. Homer Screen rounds out the field. He was a Group 2 winner in his native Brazil and his best effort to date in North America came when second in the Grade 3 American Stakes in June.

There’s no doubt the handicapping process starts by analyzing a particular horse its chances of success. Still, in some cases the trainer is just as important, provided the horse fits the conditions of the race he/she is starting in and is in form. With that in mind, I must call attention to the amazing record of Modern Games’ trainer Charles Appleby when he ships horses to North America. Per a Stats Race Lens query, when Appleby comes to North America, his horses perform incredibly well to the tune of 15 wins, 10 second-place finishes and two thirds in 38 starts going back five years. When jockey William Buick is in the saddle, as is the case with Modern Games, Appleby has won seven of 13 races over the same period. One of those wins came in last year’s Breeders’ Cup Juvenile Turf, where Modern Games went to post as the favorite in a field of 14 and won pretty easily after breaking slowly (he ended up a non-wagering starter in the race after being withdrawn due to gate trouble and then reinstated). Making his debut as a 3-year-old this past May, Modern Games won the Group 1 Poule d’Essai des Poulains (French One Thousand Guineas) at a mile then finished third and fifth before a facing older foes for the first time and finishing second in the Group 1 Sussex Stakes. His four Equibase Speed Figures this year are 125, 120, 119 and 119, and only two other horses in the field (Shirl’s Speight and Finest Sound) having exceeded or tied the 110 figure threshold this year. That means Modern Games seems very likely to add another win to Charles Appleby’s record in North America.

Ivar ran as fast winning the 2020 Shadwell Turf Mile as Modern Games has run in all his races this year, earning a 122 figure. He nearly ran that fast again facing top company last November when he finished third with a 117 figure in the FanDuel Breeders’ Cup Mile Presented by PDJF before taking eight months off. As if he had run just a month or two earlier and not eight months earlier, Ivar won his comeback impressively in July in the Jonathan B. Schuster Memorial Stakes at Horseshoe Indianapolis. He’s likely to improve significantly in his second start of 2022, and Ivar can be expected to put in a strong late run. If Modern Games isn’t up to the task, Ivar can earn  the second Grade 1 win of his career in Saturday’s Woodbine Mile.

Shirl’s Speight won the Maker’s Mark Mile this past April, which was his third win and second stakes win in a row. He earned a 110 figure for that effort and although he’s gone off form a bit since then, he has a chance to redeem himself Saturday. One of his three starts since the Maker’s Mile was on dirt, a surface he has no fondness for, and the other was a seven-furlong prep for this race over Woodbine’s turf course in July (he finished fifth of 10 in the Connaught Cup Stakes). Since then, Shirl’s Speight put in an exceptional five-furlong workout (59.4, best of 46 on the day) which signals he’s coming back to top form. Although that form appears to be a bit short of the best form of Ivar and Modern Games, I wouldn’t rule Shirl’s Speight out as a contender in this race based on his tremendous Maker’s Mark Mile effort earlier this year.

Finest Sound has more second place finishes (five) than wins (four) in his career, but like Modern Games he has been running with some of the best horses in Europe this year. He finished second in the Celebration Mile Stakes in his most recent race, earning a 116 figure, and that’s just shy of the 120 career-best figure he earned in March when finishing second in the Jebel Hatta Stakes. Plus, his regular jockey Andrea Atzeni comes over from England to ride on Saturday.