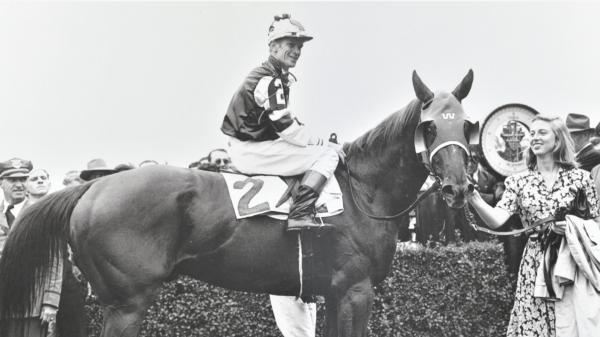 The Merriam-Webster Dictionary defines courage as “the mental or moral strength to venture, persevere, and withstand danger, fear, or difficulty.” We see human examples of this each time jockeys guide thousand-pound Thoroughbred dynamos from the explosion of the starting gate to the rush for the finish line. Horses, too, show the bravery in the face of great challenges – see Afleet Alex overcoming stumbling to his knees to win the 2005 Preakness – wordless in their execution but saying so much with their heart.

Before Assault brought home a crown in 1946, “the club-footed comet” needed all the courage he could muster to overcome a serious injury as a foal, a tenacity he owed to the mare who gave him life.

King Ranch spanned a large swath of southern Texas, some 500,000 acres at one point. This is where the Santa Gertrudis breed of cattle was developed and where Robert Kleberg Jr., who had taken over the ranch after his father’s death in 1932, decided to invest in breeding Quarter-Horses. That venture into one breed led to the pursuit of breeding Thoroughbreds as well.

Kleberg acquired a mare named Incandescent, who he paired with Equipoise, the Whitney-bred superstar of the early 1930s. She produced a filly, Igual, who ran into trouble in her earliest days. Igual was sickly, failing to thrive to the point that Kleberg feared they would have to put her down. But the filly had a pedigree that included Masda, Man o’ War’s full-sister, and Chicle, sire of the mare Mother Goose and Gallant Fox’s rival Whichone. Kleberg’s cousin Caesar recommended they give Igual the same going-over that they would give calves when they are ailing or underweight.

King Ranch veterinarian J.K. Northway gave the filly a full hands-on examination, which turned up an abscess in her stifle. Once that was treated, Igual recovered, overcoming that tenuous start to life but never quite grew enough to be a racehorse, so Kleberg added her to his broodmare band. She was not going to have the chance to shine on the racetrack, but Igual would pass on something even more important to her foal by a dual Triple Crown race winner.

Bold Venture was not supposed to win the 1936 Kentucky Derby. In a race where the favorite Brevity was knocked to his knees at the start, this 20.50-1 shot held off Brevity in a furious stretch run to win by a head. If his Derby win seemed like a fluke, then Bold Venture’s Preakness would show that the colt had serious mettle in the face of stiff competition. He caught Belair Stud’s Granville in the Pimlico stretch and slugged out a win in the second jewel of the Triple Crown by a neck.

While training for the Belmont Stakes, Bold Venture bowed a tendon, ending his Triple Crown bid and his career. Kleberg purchased Bold Venture and brought to stand at King Ranch in 1939. The following year, he paired Igual with Bold Venture and got a plain chestnut colt with a snip of white, to whom the wartime name Assault was given.

Like his sire and dam, a young Assault was not a big guy. Bold Venture was only 15.1½ hands (61.5 inches at the withers) himself and Igual was on the small side as well. He was turned out with his dam into the expansive paddocks at King Ranch, which were larger than many one would find in Kentucky. The hot, dry south Texas landscape featured dense thicket, with rattlesnakes, armadillo holes, and uneven ground, all risky for the horses that roamed the enclosure.

But it was not a rattlesnake or a hidden hole that got Assault. It was an errant surveyor’s stake, a piece of wood missed when the team finished their work in the area. The young colt stepped right on it, the piece of wood going through the frog, or the shock-absorbing pad inside the hoof, and then coming out the coronet band, the thin band where the bones of the leg meet the foot, the origin point of a hoof’s growth. It was a serious injury that had Kleberg worried that he might have no choice but to euthanize Assault.

Once again, the veterinarian Northway came to the rescue, betting that the colt had the same will to live as his dam had when that abscess threatened her life. When an infection set in the affected hoof, Assault was clearly in pain, unable to put weight on that foot. Northway cut away much of the middle part of the split hoof and showed grooms how to wrap the hoof with medicated gauze to promote healing. Eventually, the hoof healed, but the damage was done: that right front hoof would never grow the same as his other three again. That put his racing career in jeopardy. Would the colt who seemed to stumble at a walk or a trot ever be able to run the way his pedigree promised?

Indeed, the courage that Igual had passed down to her colt, that will to live that had seen Assault through that grievous injury was about to come in handy once again. In the King Ranch yearling trials, Assault showed his trainer, Max Hirsch, and others that he had the right stuff, that same speed and stamina that had carried Bold Venture through his classic wins.

The nickname “the club-footed comet” was a bit of a misnomer. Instead, the hoof on Assault’s right foreleg was not a clubfoot, but more of a dish, elongated in the front. The hoof wall was thinner, barely an eighth of an inch, so shoeing that foot was a delicate art that Hirsch knew had to be done correctly every time. One bad trip to the farrier could sideline Assault for months or even force him off the track permanently. Fortunately, that never came to pass.

Instead, Assault showed the same courage that had seen Igual through her own trial and pushed through the accident that had left him with that scarred hoof. He loved to run and was good at it, so good that he won 18 of his 42 starts and finished second or third in 13 more. Included in that list of victories was the 1946 Kentucky Derby, which he won by eight lengths before going on to win the Preakness and Belmont Stakes and becoming the seventh Triple Crown winner.

In a career marked by battles with names like Armed and Stymie, Assault did not let the uncertainty of that delicate hoof stop him from winning two Brooklyn Handicaps among the long list of victories that earned him a spot in the Racing Hall of Fame. He might have been small, but Assault was mighty.

“I never trained a better horse,” Max Hirsch said, “Man o’ War had everything, but so did Assault.”