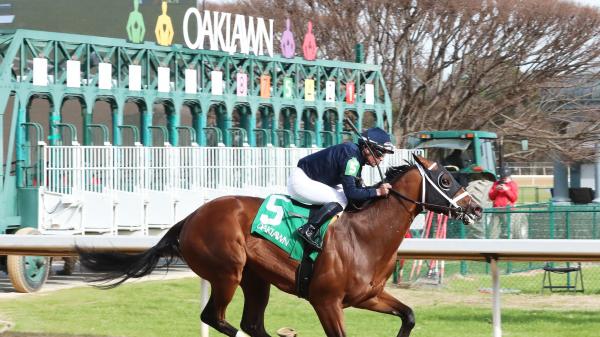 A first-out winner at Saratoga Race Course this past summer, the 3-year-old Justify colt scored his second victory in his fourth career start in Saturday’s fourth race at Oaklawn, a two-turn one-mile contest with a $104,000 purse. Between the two victories, he ran second in the Grade 1 Champagne Stakes on Oct. 1 and sixth in the Nov. 4 Grade 1 FanDuel Breeders’ Cup Juvenile Preented by Thoroughbred Aftercare Alliance.

After racing farther off the pace than usual in the Breeders’ Cup after a slow break, Verifying was sharp from the break in his victory at Oaklawn. He perched just off early leader Gun Pilot and drew clear once cut loose by jockey Martin Garcia leaving the second turn. He raced a mile on a fast track in 1:37.23, which was faster than the time older stakes winner Ginobili clocked (1:37.35) in winning the $150,000 Fifth Season Stakes for older horses about 2 1/2 hours later on the card.

“It went better than planned,” Cox said in a phone call Jan. 14. “We’ve always liked this colt. Mentally, I don’t know if he’s always been as polished as some of the other ones, but he’s really starting to, I think, figure it out. I thought it was a huge run off the freshening since the Breeders’ Cup.”

Out of the graded stakes-winning Repent mare Diva Delite, Verifying was a $775,000 purchase at the 2021 Keeneland September Yearling Sale from the consignment of Hunter Valley Farm, who co-bred the colt with Mountmellick Farm. He races for the Coolmore-affiliated Jonathan Poulin, Westerberg, Mrs. John Magnier, Derrick Smith, and Michael Tabor.

Verifying is among a large group of 3-year-olds trainer Brad Cox is expected to race in stakes this winter and spring with hopes of continuing toward the May 6 Kentucky Derby Presented by Woodford Reserve at Churchill Downs.